What is an Ultrazord? An Ultrazord could be understood as being a combination of all the zords in the team's arsenal. Some that look like this does not have the title.

Case #1: Ultrazord
The first Ultrazord we got, was made up of seven zords. While there has been Megazords made out of 9 zords and not called Ultrazords.

Case #2: Thunder Ultrazord
With 7 Zords, the Tigerzord was kept inside Tor and five main ones above. 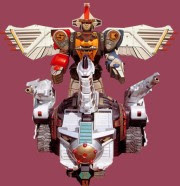 Case #3: Ninja Ultrazord
Manipulated photo above. This did not exist in Kakuranger, the source of the footage. But for Bandai Ameirca to advertise the return of Titanus, the Ninja Ultrazord was made for Season 3. 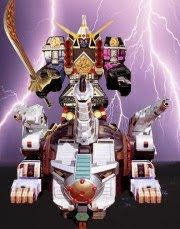 Case #4: Shogun Ultrazord
Manipulated photo above. This did not exist in Kakuranger, the source of the footage. But for Bandai Ameirca to advertise the return of Titanus, the Shogun Ultrazord was made for Season 3. As mentioned before, they used the actual toy---which had the Pink Shogunzord, which was made for some reason, causing an unexplained anomaly. This only had 6 zords as Falconzord was stolen by the villains at the time.

Case #5: Zeo Ultrazord
They would ride outside or inside, didn't include the Super Zeo Zords; had 7 zords like the past Ultrazords.

Case #6: Mighty Mammoth
No official name was given to this combination, either the Hurricane Megazord or the Thunderstorm Megazord climbs on top of the Mighty Mammoth and shoots out the Power Spheres, I would consider this an Ultrazord since it carries most of their arsenal.

Case #8: Jungle Pride Charge
While no consistent or proper title, it sitll was not referred to as an Ultrazord, it would either have the main spirits, the master spirits or with the Rin Beasts (Lion and Chameleon). It would either have 7 or 5 zords at a time.

Case #9: RPM Ultrazord
RPM Ultrazord is accumulation of 12 zords, all the zords in their arsenal.
Posted by Lavender Ranger at 12:00 AM

Well I must admit, I am starting to develop a robot fetish after rediscovering some old bionicles of mine, but I still hate all things giant.

Not that it's at all important, but I was looking at a clip on YouTube of Shogun Megazord (http://www.youtube.com/watch?v=blYLArKb988) because I didn't remember it very well and it does appear to exist with Falconzord at least some of the time.

The other thing that I just noticed upon reading this post and looking at these clips is that Shogun Ultrazord and Ninja Ultrazord both contain the central body piece from Dragonzord, which is pretty strange if you think about it.

Yeah, i am aware of the dragonzord part, it is one nitpick of fans.