A Male Pink Ranger would be...
I know I asked this before, about male Pink Rangers but I changed the options and it is a little different, as with Gokaiger, it seems to be a possibility as we have seen all 5 Gokaiger as Red, three as Black, and three as White; female black rangers and female red rangers out of it.

What I meant to write was 'If Gokai Red, Green and Blue do become Pink Rangers, and I didn't like this, it makes me feel.' This poll is those are uncomfortable with the idea, it is not for everyone.

I believe Pink is a girl color because...
I've also done a poll like this before, links below.

Do you like the color Pink?
Above I changed it a little bit as I have more space. 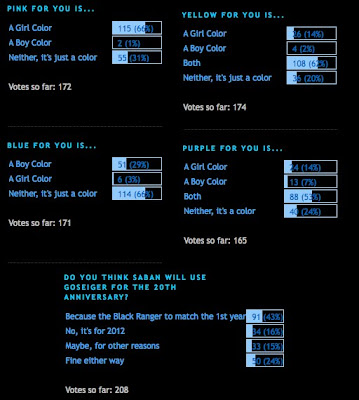 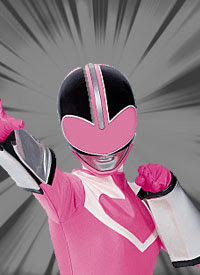 Pink for you is...
A Girl Color - 115 votes of 172
Neither - 55
A Boy Color - 2
That was an interesting poll because for yellow, people said the color could go for both, but blue, most voted for 'Neither, it's just a color'---which I feel about all colors, but people strongly voted that pink is a girl color.

i've got my own SS/PR in the thought process and am using colors that haven't been used for each gender. and the past sentai thing in Gokaiger doesn't count to me since those aren't their permenent colors.

my colors:
Red Girl since i want a full season red ranger whos a girl.
Blue Boy since i needed at least two guys
Green Girl since it had never been done before.
Black Girl since it'd be intersting to have a girl wear black and not be goth.
Pink Boy only if any guy they hire would look good in pink since i've seen guys who don't look good in pink at all.
Purple Girl since we have a Viloet guy we need one now.

Colour gender stereotyping...if u are modern, i think 21st century, boy wear pink T-shirt, i think it is not a matter...

anyway, still depend on the society itself...

My friend who like to wear pink T-shirt say boy who can brave enough to wear a pink T-shirt, is the man which can change the world...overall, it is the character which is more important rather than colour...

you need to study sociology...

personal request for the blog master, I am currently 20 years old...and I live in one of the country in Asia, and I encounter such comment from my friends, when i say Super Sentai they will say it is Power Rangers thou I say got difference between the two and every time i show to one of my friends, his respond will be -->swt! I hope you can post something on this and how should we respond as a minority(i think so)...however, my friend who sweat on me about Sentai is Power Rangers, actually like watching Kamen Rider Decade and OOO...plus it seem that he is trying to tell me that Robot Arsenal like in Sentai/Power Rangers is for kids and Kamen Rider don't have that...Kamen Rider OOO a bit like Heroes he say...no Arsenal much more mature...I hope you will post something on this...

Colors can be either gender, but it's still the girliest color. I mostly associate it with energy and peppiness because of characters like Amy from Sonic and Pinky Pie from My Little Pony. Basically, Akiko Narumi would be the perfect pink-type character. Since pink is a shade of red, I do associate if with passion and courage a bit. My crush has a pink shirt that says "It's not pink. It's lightish red." I'm used to seeing guys in pink, mostly because of Decade.