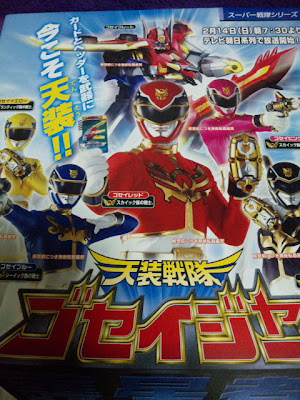 DX Tensou Gattai GoseiGreat:
Releases in- February
Price- 7,500 yen
Info-
GoseiDragon, GoseiSnake, GoseiShark, GoseiPhoenix and GoseiTiger unite! Each animal's GoseiHeader can be seperated from its body, and along with being attached to other toys in the set, 3 power up headers for each tribe (Skykku, Landic and Seakku) are being released with the first wave that can be swapped to change the GoseiMachines' heads. These will act like the gattai series for Goseiger. The heads are swapped out for the mecha that belongs to that tribe. 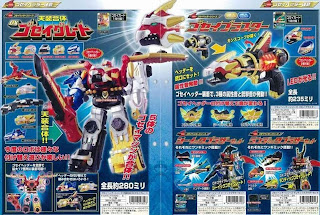 There are a total of 17 GoseiHeader joints on GoseiGreat. Take that as you will. Whereas the rangers will use the cards to summon the Machines, the robo series is fairly unrelated to the cards, with the Headers taking over. The rest of the toyline is totally dedicated to the card system.

Seakku buraza Set:
Releases in- February
Price- 2,200 yen
Info- A set of GoseiHeaders which includes the Indigo MantaHeader (Manta Ray), Cyan HammerHeader (Hammerhead Shark) and Teal NokogiriHeader (Nokogiri is Sawfish). The heads can be swapped out for GoseiShark's. Nokogiri's saw can spin.

GoseiGreat can combine with these headers to become "Landic GoseiGreat". Stag forms the new head, while Tyranno and SaiHeader swap out with Snake and Tiger to become feet. The SnakeHeader and TigerHeader are then rejoined at the knees.

I am surprised the drill is a rhino, I thought it was a mole. 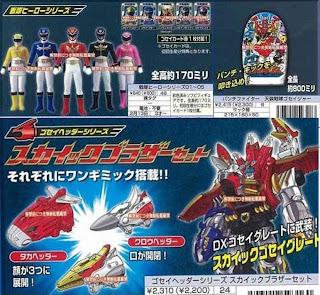 Skykku buraza Set:
Releases in- April
Price- 2,200 yen
Info-A set of GoseiHeaders including TakaHeader (Red Hawk), PteraHeader (Red and Olive-Yellow Pterodactyl) and a white CrowHeader, that can be swapped with GoseiDragon and GoseiPhoenix. GoseiGreat can unite with these 3 headers to form Skykku GoseiGreat. Here, the 3 headers unite into a giant crown-n-shoulder cannons, with the Ptera and other bird uniting on GoseiGreat's shoulder, and the Eagle making up the head.
I wish the sky ones had different colors, more like purplish, the red is boring to me. 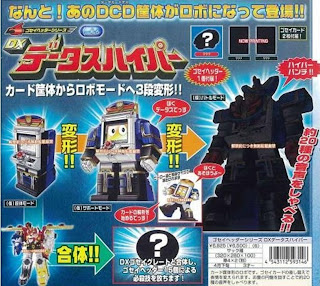 Furthermore, the 15 existing GoseiHeaders can be utilized by the combined Sypher/GoseiGreat in its finishing move. Not sure if the 15 are on the formation to start out with, or if they join to perform the finisher. 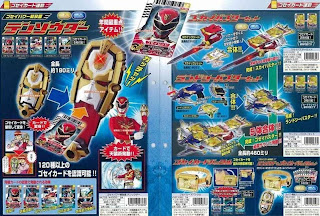 Tensouder:
Releases- February
Price- 4,500 yen
Info- Henshin Device and Card Analyzer. 120 possible sounds. The Tensouder is shaped like a Moai head. It can be worn like a bracelet, and resembles the DragVisor of Ryuki. However, it seems to be adjoined to the hip when not in used. Activates the Gosei cards.


COMMENT 12/6/09 10:30 PM EST
Did you see Gosei Great?! The main robo is behind Gosei Red on the picture above, oh my god, it's beautiful! It looks so dynamic and different than most giant robo from past years.

Posted by Lavender Ranger at 2:00 PM

Groan. So the mecha will be like Go-Onger?! And I was looking forward to a straight forward 5-piece animal mecha! Not origami animals, not animal-cars, animals! There hasn't been one of those since Gaoranger!

Mark, in what way are the Gekibeasts disqualified in your mind?

Probably because they were manifestations of the Gekirangers themselves.
Soseiger somehow appears like a mix of OhRanger ( Heads ), Go-Onder ( Animal Vhicles) and Dairanger ( Outifts and general feel ) to me so far.