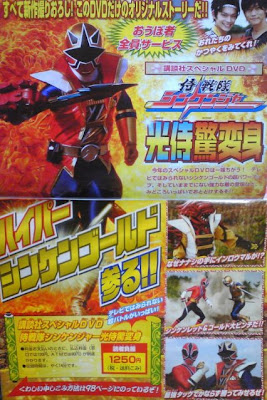 Shinken Gold gets to wear Hyper Shinken Red's red jacket, but only in the Hyper Battle Video called Red Vs Sixth: The Light Samurai's Suprise Transformation. Hyper Battle Video is a special DVD (used to be VHS) that is like 15 to 20 minutes long, usually has some clips from past episodes and some new or different character and/or item. They are the Kodnasha publishing magazine. The Hyper Battle Videos are meant to be a showcase of arsenal and abilities. 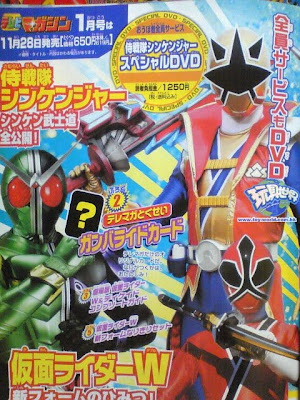 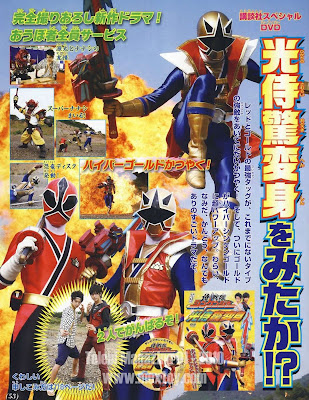 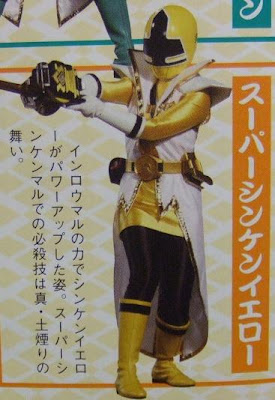 Super Shinken Yellow
Kotoha has yet to use this mode in the telvision series, it has only been seen in the magazines. I am upset they haven't shown this mode yet because Kotoha has never gotten an episode on her own, she has shared the light with other Shinkenger but never alone. 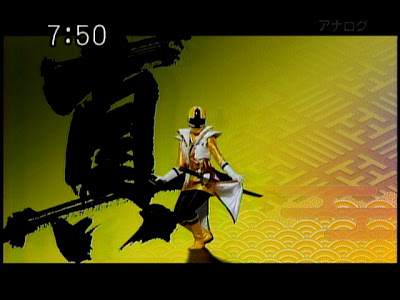 She finally used the mode on the November 1st episode.


Let's go over all the special video: 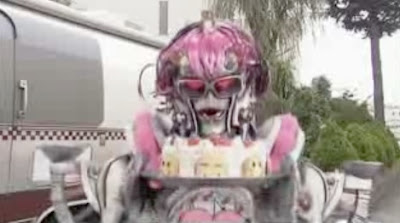 Engine Sentai Go-Onger (2008)
Kodnasha Special DVD: It's a Seminar! Everyone GO-ON!!
The Go-Onger and Bomper have a special seminar going over water, air and land. They show clips of themselves and the Gaiarc. Kokorootomedes then shows up for revenge for his little brother Hiramekimedes, Kokorootomedes is a madien in his eyes, if he was human, he would have been consider transgender. He was defeated by Red but powered-up and was destroyed once again with the KanKanBar (Speedor with T-Line and K-Line). Hiroto and Miu only appear in clips. 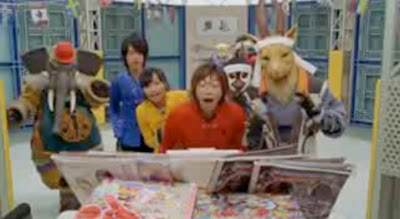 Jyuken Sentai Gekiranger (2007)
Gyun-Gyun! Kensei Athletic Meet
The seven Kensei competing in the Fist Sage Great Althetic Meet along with Jan, with clips of the past episodes. The winners of the meet were to get magazines about Gekiranger. 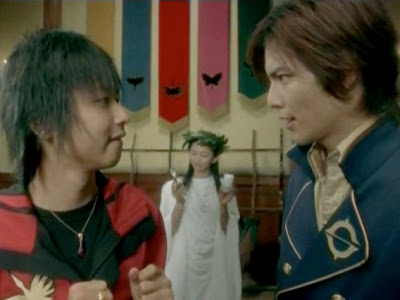 Mahou Sentai Magiranger (2005)
Revealed! The Gold Grip Phone's Super Magic ~Golu Goolu Goo Goo~
That I can remember, Boukenger didn't have a V-Cinema/Hyper Video/Kondasha special. Anyhoo, in this special, the Goddess of the Spring comes when Hikaru and Kai are sparing and even though Hikaru warns him, Kai uses the Gold GripPhone to become KaiShine, a MagiShine with a red scarf and uses the King Caliber to fight. He accidentally transforms into a spider monster and admits lying and the Goddess uses the white phone to transform her back. The white phone becomes his MagiPhone again. 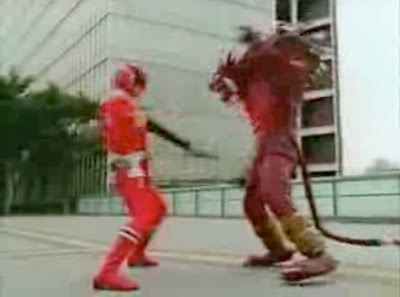 Tokusou Sentai Dekaranger (2004)
DekaRed vs. DekaBreak
Deka Red and Deka Break fight each other in a virtual world and find a red repaint of Fary from Episode 14.

Bakuryuu Sentai Abaranger (2003)
Super Video: The All-Bakuryuu Roaring Laughter Battle
I did not see this one and barely remember it. Not available on YouTube.

Ninpuu Sentai Hurricaneger (2002)
Super Video: Super Ninja and Super Kuroko
I did not see this one and barely remember it. Not available on YouTube.

Hyakujuu Sentai Gaoranger (2001)
Super Video: Showdown! Gaoranger vs. GaoSilver
The Gaoranger fought against Gao Silver (for fun) and there was also a red Pyon (named Flame Pyo 炎のピヨちゃん) featured, my friend had a picture of it but no longer has it on her site Sentai Spoilers.

Mirai Sentai Timeranger (2000)
Super Video: All the Strongest Hero Secrets
I did not see this one and barely remember it. Not available on YouTube.

Kyuukyuu GoGoFive (1999)
Super Video: The Rescue Spirit Five Doctrines
I did not see this one and barely remember it. Not available on YouTube.