UPDATE Oct 8, 2011 10PM EST
Here is a list of 'Evil Sentai' or evil Power Rangers that looked just like the main team. Note: The Nejiranger/Psycho Rangers also originally looked like the Megaranger/PR but later took other forms. Gingaman of Fiveman also briefly looked like Fiveman.

[No Pictures]
Fake Jackers
In episode 22 of JAKQ Dengekitai, thanks to Scrap. They had powers of invisibility.

Fake Battle FeverEpisode 9 of Battle Fever J had 3 ordinary men who were brainwashed into pretending to be the Battle Fever team. They never actually wore the suits though.

The Death Dark V
They appeared in Ep 45 of Goggle V. Goggle Red was a monster named Tanukimozuh.

Shadow Jetman
Light Armadillo made five copies of the Jetman, they had black suits with everythign else the same but with darkened helmets. 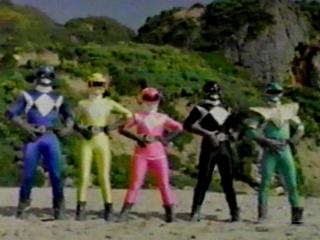 Mutant Rangers
Only exclusively to Power Rangers, Putties became Rangers thanks to Commander Crayfish. Crayfish was the equivalent of Red, there was only Blue, Yellow, Pink, Black and Green. Only Green, Blue and Black grew big. This was from footage that fans call 'Zyu2.'

The Copy Empress made multiple evil exact copies (no variations) of the Dairanger (2003). The monster is best known as Photomare of MMPR Season 2. We saw their human forms. There were Red, Pink, Yellow, Green and Blue. 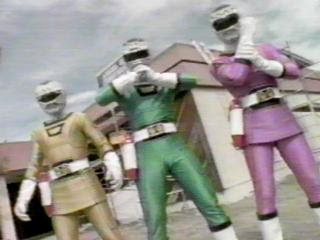 Shadow Rangers
In Turbo (1997), a Chromite or Robot Warrior made copies out of the shadows of the Turbo Rangers. Only exclusive to the Power Rangers. There was no Red one, only Yellow, Green, Pink and Blue. They had faded white helmets.

Cyborg Rangers
Robotic Rangers meant to replace Lightspeed (2000). They turned bad and the Rangers had to stop them. They had head antennas, things on their chests, black belts, gloves and boots. They were exclusive to Power Rangers. There were Red, Pink, Yellow, Green and Blue.

In Timeranger (2000) and Time Force (2001), a villain made evil copies of the heroes in another dimension. They look exactly like them, no variation. There were Red, Pink, Yellow, Green and Blue.

Copy Sentai Copyrangers
In Gaoranger (2001), they face the Copy Org and he made these copies. Didn't appear in Power Rangers. There was Red, Blue, Yellow, White, and Black. They had horns on their heads.

Shade Rangers / Shadow Rangers
In Gaoranger and Wild Force (2002), Duke Org Dorodoro/Onikage sent these six on the heroes. There was Red, Blue, Silver, Yellow, White, and Black. They wore all black and their helmets were partially black.

In Hurricanger (2002), Saandaru and Madogi made six Ranger clones (no variations) out of six feathers. They controlled them by neck bracelets. They then put the neck braces on the real team. Didn't appear in Power Rangers. There was Red, Yellow, Blue, Green, Kabutoraijer and Kuwagataraijer.

In Magiranger (2005), when they went to get their mom, they had to face evil clones of themselves with black necks thanks to Toad. In Mystic Force (2006), they appeared when they fought Hekatoid. There was Red, Blue, Yellow, Pink, and Green.

The Western Ashu/Crazar made these copies of the Boukenger (2006)/PROO (2007), they had black necks. There was Red, Blue, Yellow, Pink, and Black. 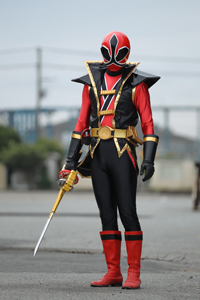 Gedou Shinken Red
In Goseiger Vs. Shinkenger, Takeru was forced to be evil.

Posted by Lavender Ranger at 11:44 PM

I'm pretty sure the black neck ones did appear in mystic force, but I can't remember which episode

I tought the evil rangers did appear in Mystic Force, when they battled Hekatoid.

In Fiveman, the Gingaman team of Chevalier stole their powers and became an evil Fiveman force.

In jetman. that armadillo monster made shadow version of jetman

thanks for the Jetman one, I'l add it.

that's the wrong timeranger/timeforce picture that's from "reflections of evil" instead of from "trust and triumph".

@lavender ranger. Ur welcome. It is always nice to help a fellow sentai lover.

The Japanese Wikipedia has an entire list of Evil Sentai in Super Sentai. Here's the pre-Jetman ones you list.

JAKQ Dengekitai - The Fake Jackers from episode 22
Battle Fever J - Episode 9 had three ordinary men who were brainwashed into pretending to be the Battle Fever team. They never actually wore the suits though.
Goggle V - The Death Dark V in Episode 45. Goggle Red was a monster named Tanukimozuh
Dynaman - Episode 24 had Kitsuneshinka, who could disguise himself as any of the Dynaman, including the Dynarobo.
Fiveman - While Gingaman is technically mentioned already, in episode 42 they stole the Fiveman team's powers and wore their suits. I believe they would scarfs IIRC.

Thanks I needed that! I didn't think to look there. Anyway my kanji reading skills are not perfect.

Some corrections and clarifications on my previous post after seeing the episodes I've listed:

*The "Dummy JAKQ" (per actual name used on the show) in Episode 22 of JAKQ Dengekitai never actually fought the heroes. They were really four Crimers who sparred with Devil Scrap's Scrap Gundan, the actual villains in the episode. The Scrap Army are probably much closer to being the Evil Sentai on this show, even though they looked like zombie-like humans and never wore any Super Sentai-like uniform. Their names were Dark Scrap, Brown Scrap, Black Scrap and Gray Scrap.

*The Battle Fever impersonators were really lame. They were basically just three guys (not five) in motorcycle gear who went around telling people that they were the Battle Fever before doing nasty stuff like robbing gun shops. I don't think they should even count as an Evil Sentai, but whatever.

*Death Dark V - Tanukimozuu was actually disguised as Goggle Black and Goggle Pink as well in addition to Goggle Red. In fact, he only disguised himself as Goggle Red to show off his powers to the Death Dark leaders. He spends more time disguised as Goggle Black than any other member, hence the episode title, "The Two Blacks". The Death Dark V only appeared at the end of the episode and they were really five Madaramen whose appearances were altered by Tanukimozuu's shapeshifting powers.

*Unless I missed something, Kitsuneshinka could only disguise himself as one Dynaman member at a time. Although he did disguise himself as the Dynarobo (done with an obvious split screen effect, probably because they didn't have a second suit). Here's a hilarious scene from the episode where they managed to call out Kitsuneshinka from his disguise.
http://www.youtube.com/watch?v=yF2d-HP-IAE&feature=related

*When the Ginga Sentai disguised themselves as the Fiveman, you can tell they're evil since they use real guns on people. They each wore a color-coordinated neck scarf as well.

Here's a screenshot of every evil Sentai I've just mentioned. If you need pictures of the Scrap Army and Battle Fever impersonators as well, feel free to ask.
http://img535.imageshack.us/gal.php?g=dummyjakq.png