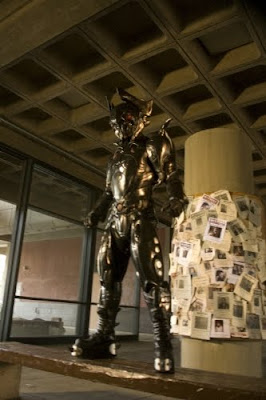 General Xaviax is an alien from Planet Karsh. Eubulon made the Kamen Riders and trained them to fight Xaviax. His world was destroyed by a war, between the planet's north, led by Xaviax, and it's south. Though the north won, they left the planet in ruins. After Eubulon rebelled, he made his conquest of Ventara and his desire to conquer Earth, personally. He defeated the Kamen Riders to conquer Ventara before going to Earth to abducting all humans to rebuild his home world. Before the start of the series he fought Eubulon, the Advent Master and the creator of the Kamen Riders. He takes a human form to trick the Kamen Riders into believing they are doing the greater good or offering them something they desire. In the video game he was played Kyle Hebert and an action figure was planned but never released. 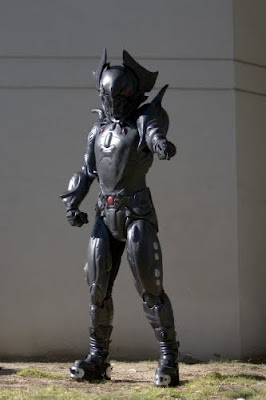 William O'Leary played Xaviax, human form and voice in suit, he is best known as Marty Taylor in "Home Improvement," brother to Tim Allen's character. He played Xaviax with an slimy charisma, a moral ambivalence and sometimes he would camp it up. The first of his disguises is Preston Family attorney Walter Conners which he uses to announce the severance of Richie Preston (Incisor) from the family fortune and an opportunity to become a bounty hunter of Kamen Riders. He appeared as a mercenary captain Race Mattock to entice an underground fighter named Grant Staley (Camo) with the idea of being a great fighter of two worlds. He appeared as a Battle Club tournament official named Charlie Feathers to blackmail motocross racer Brad Barrett (Thrust) holding the proof of his innocence for a cheating scandal Brad didn't commit. He appeared as a government Special Agent Simons, giving the asthmatic marine Chris Ramirez (Sting) a rare opportunity to serve the United States in secrecy by fighting aliens from Ventara. He then appeared before the Cho Brothers with money and the chance to pull off the biggest heist of their careers, I think with no name.
Posted by Lavender Ranger at 3:51 PM

Say, do you think you could do one of these for Dark Specter? Guy gets surprisingly little love despite being the main villain of the entire Zordon era.

He reminds me of a couple of mean science teachers I've had.