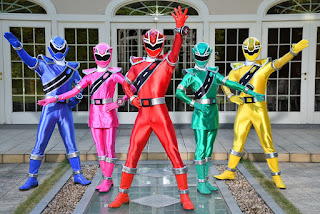 We have gotten very little information on the next Power Rangers season whereas in the past we have gotten an official announcement with a poster or logo with a story summary. What we do know is the show, the show will be on Netflix, the new Executive Producer is Jenny Klein and Jonathan Entwistle is in charge of the expanded universe. In the link below, fans have found the possible title is "Cosmic Fury." This has fans going crazy thinking it will based on a Sentai like Kiramager (gemstone/vehicle-based) or Kyuranger (constellation based). I welcome all results. They will be shooting the show soon, it will for sure shot in New Zealand. Nothing is really known. Power Morphicon is in August so hopefully, the cast will be revealed. The title could be changed. It is possible it would not premiere in February or March in 2023, maybe later.

Posted by Lavender Ranger at 9:46 AM No comments: