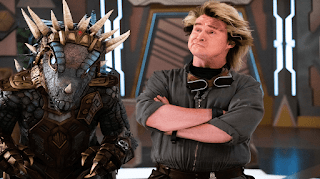 The Rangers fight a monster with their Megazord. They defeat it but Void Knight, Mucus, and Wolfbane arrive. Wolfbane growls and takes apart the Megazord. The Rangers get out of the zords and a bird bothers them. The bird turns out to be Mick Kanic from Ninja Steel. He is looking for the Nexus Star but Zayto says they don't know him and they are busy. Later, Javi and Amelia are at Buzzblast when Mick disguises as a package. He appears and surprises Javi and Amelia. J-Borg tells Mick to leave and he becomes a basketball. Then they hear an attack and go outside. Wolfbane attacks Mick. 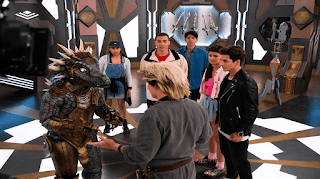 Mick becomes a toy car ad Wolfbane goes after him. The others arrive. Zayto finds out Void Knight wants the prism now as well. The five morph. They fight with Wolfbane. Green uses Muscle Dino Key and Pink uses Elasto Dino Key. Wolfbane takes apart the Boost Sleeves with his howl. Mick hides. They all teleport him away. Mick shows the Legendary Ranger Database in his base and asks Solon if he can plug it in. He shows them the nexus Prism. It has a direct connection to the Morphin Grid. Zayto says protecting it is their first priority now. Mick says there has to be a way to stop the howl. Zayto tells him Solon can help him, it is not safe for him outside. They find the Prism could be at the Waterfront. The five leave. Mick and Solon work on the howl. 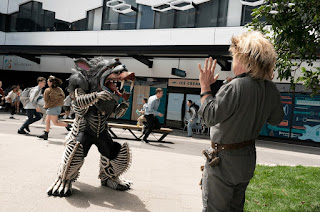 Void Knight berates Wolfbane. Boomtower says he'll do it. The Rangers arrive where the Nexus is and pretty music plays. Zayto tries reading its mind and his antennae comes out. The nexus stops spinning. He sees the Morphin Masters with stones. They used the grid to power teams of Rangers. They made the Prism. Green and Red sent the Prism to fight evil. It found itself on Earth and gave the Ninja Steel Rangers their powers. It vanished. Morphin Masters have been observing teams including Beast Morphers and them. Prism was sent on a new mission, it is searching for something. Boomtower and Wolfbane arrive. The Prism flies into the sea. The Rangers morph and get knocked down. They then fight. 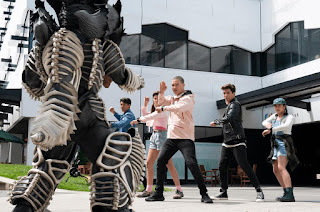 Mick arrives and gives Wolfbane a 'treat' which makes his voice squeaky, it is a no howl drop. Wolfbane and Boomtower grow. The Rangers call the Zords and Mick leaves. The Rangers form the Megazord Warrior Formation with all 5 zords. They fight Boomtower and use their attacks. Boomtower goes down. Wolfbane jumps on top of the Megazord. It is destroyed. Mucus gets the Sporix. Boomtower powers up and does his signature attack. Megazord jumps up and counterattacks. They use the Mega Fury Saber and the other forms appear and make a Mega Slash. Boomtower is destroyed. Mucus goes for the Sporix but Izzy catches it. She almost gets Mucus but Mucus leaves. The Prism flies away. Mucus gives Void Knight the Sporix. He puts it in a device. It powers up but he needs more. Void Knight is impatient and goes to his secret room. He tells someone inside to forgive him. It is a beautiful woman, giving Mr. Freeze vibes. He calls her his love. Izzy says she is starving. They eat candies. Solon and Mick arrive and ask what happen to the drops. The Rangers have funny animal voices because of the failed drops. Solon roars and they return to normal. Zayto learns a lesson. Mick says he'll open a steakhouse and Izzy asks if Rangers eat for free. He says maybe a discount.

Zayto dimissing Mick seemed a bit out of character and unneccessary. As for the Morphin Masters creating the Nexus Prism, there is no surprise there, but it strange to add something from a past season with a 'mystery' plot without much else to go on. Also

Posted by Lavender Ranger at 8:29 AM No comments: