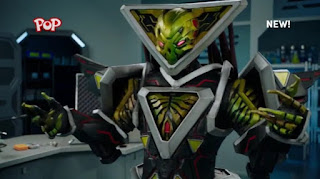 The Rangers cut the Morph X energy supply and have an arrow to take him down. It will be launch with the Beast-X Blaster, a combo of a couple weapons. Zoey shows it off and freezes Berry's dad's wedding tuxedo in ice. Ben tries breaking it open with no avail. Nate hasn't figured out how to separate his dad out. Devon is concerned. Nate says he has been working hard. Devon leaves, saying he will find a way. Scrozzle is concerned, Evox wants Roxy and Blaze to get more Morph-X. 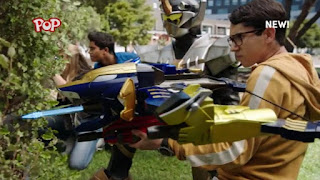 Devon looks through newspaper articles and finds one with his dad and him. Cruise brings more Ranger records. Ravi asks Devon and he found info on a Black Ranger that had a virus and tries to get a response from Dr. K. Bulldozertron arrives and the Rangers morph and fight. Blaze and Roxy morph and fight Gold and Silver. The trio power up. Ravi goes to help the others while Red and Yellow defeat the Bulldozer. Gold and Silver fall down and the bad guys leave with Morph-X. Silver blows up the tanker with the bad guys. Commander Shaw arrives says the last tower was able to be drained and it will be left unguarded. Scrozzle hears this. It was bait, Yellow hears this. 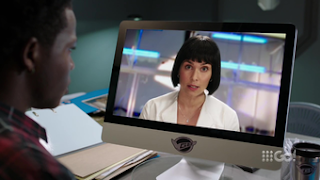 A Gigadrone is sent to Tower 5 and they get a new interdimensional call. They figure the call is from Dr K. Devon and Nate go to the base with Shaw. The others form the zords to make a new combo: Beast X Ultrazord. They destroy the Gigadrone. Dr. K talks technobabble to Devon, saying her tech can not help. What happened was different. She thinks about something she read about Doomwing and Zenowing and made Split Emitters. Devon returns to the gang. They figure Evox will show up at Tower 5. Devon asks about the old Ranger tech in Nate's vault. He says he may have Split Emitters. Shaw tells them to go. Nate gives Devon Morph-X and asks for their help. They enter the vault and find random Ranger tech. Betty finds Split Emitters and they take them. 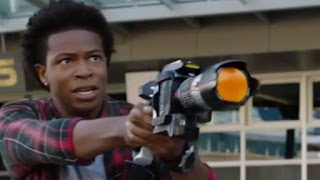 The others wait at Tower 5. Evox arrives, growls and can barely move. Nate has the bow and shoots towards Evox but Evox stops it. He throws it towards them. They jump back at the ice attack. Evox is stopped by Devon. Mayor Daniels appears and tells Devon to let Evox pass. He says he will be destroyed. Ravi says it isn't his real dad talking. The Rangers try to deter Devon. Devon puts down his weapon and smirks. Ben tells him he's ready. Devon says transport and the split emitters split the Mayor and Evox apart. Devon goes to his dad. They hug. Scrozzle come to Evox. Evox says he is needs Morph-X. They teleport away. Later, Shaw recharge the towers and Morph-X is back to energize the city. Shaw asks Mayor what he might know. He says his last memory is the explosion in the portal (end of season 1). Nate tells him it was all Devon. Betty and Ben use the split emitters to take their dad's tuxedo out, they accidentally get their dad trapped in there and then Ben. Devon saves the day by getting them all out.

Review:
A pretty good episode and great to see Dr. K back. But a little unbelievable that the past Rangers would let Grid Battleforce even get their old tech, let alone their morphers. Even unbelievable that Dr. K would let them have the Cell Shift Morphers. Fans were also discussing how they could have SPD tech if SPD takes place in 2025. For me, the crew just put random tech for fun without thinking of why and how. Also, it would've made more sense if the Dino Charge Rangers had the Split Emitters and not Grid Battleforce. Given what happens in later episodes, I guess it is all out of the window in terms of logic.

Posted by Lavender Ranger at 3:05 PM No comments: