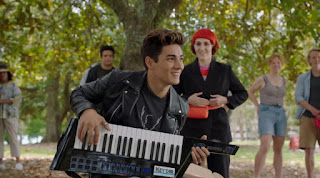 Solon prepares the now-ready Zord finder which uses the five keys. Javi is not around and Izzy says he could have a new instrument. Solon says they have to wake up the zord. Javi indeed has the new Keytar he was saving up for. He plays it in the park. People like it. Jane and J-Borg are looking for stories in the park. J-Borg spots the crowd. They go near and record Javi. Jane appluads Javi and says she wish she could. Javi says J-Borg can make music too. J-Borg says she can sing. Javi plays music and J0Vorg vocalizes which the others don't like but Jane does. Jane then raps. The crowd likes her rap. Javi's dad comes and says they are disrupting the birds. His dad takes the Keytar and have people clear out. He sees the price and says Javi should save his money. He says Javi has given up on the other instruments and leaves. Javi says he still uses his whistle. 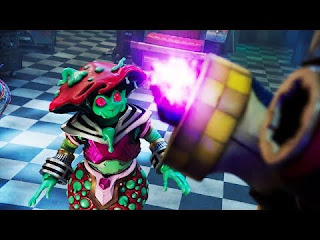 Javi arrives at the base. The others tell them the bad news that they can't find the Stego Zord. Javi is sad and leaves. Javi says he is fine, even though he doesn't seem fine. He teleports away. Izzy says she'll talk to him and teleports away too. Meanwhile, in Area 62, Boomtower has waited long enough for his power source and takes a Sporix. Mucus warns him. He puts the Sporix in his chest. He powers up and laugh. Izzy finds Javi and talks to him. He is about to tell her when Doomtower arrives with Hengemen and Mucus. They morph and fight. Izzy uses the Sprint key and Havi uses the Shield Kye. Red arrives and uses Hyper key. Pink uses Gravi Key. Blue uses Elasto Key. Doomtower uses his boom blast and de-morphs the main three. Javi blocks it and have Izzy strike him. But he strikes her first and she de-morphs. Javi comes to his step-sister's aid. Zayto tells him to take her to safety. 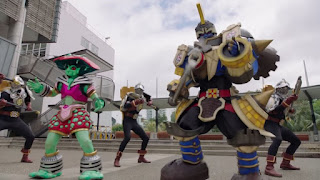 Void Knight arrives and berates Boomtower. The hengemen fight the Rangers. Javi and Izzy are found by their dad and the dad blames Javi for Izzy being hurt. The others try to comfort him but he goes in the truck. Back at the base, they talk about how Javi is 'salty'--grumpy. Solon finds the viral video and shows how the dad took away Javi's keytar. Javi arrives and says Izzy will be fine. The others tell him about the video. They ask if they can help. Javi says no. Ollie says maybe his music energized Stego Zord. Solon tells Javi to play an instrument. He plays a soft tune on his whistle and Solon detects the zords. The music must amplify his ranger energy. They spot it. They get a call from J-Borg about Boomtower. Javi is sent to find his zord and the trio goes to fight Boomtower.
The Rangers arrive morphed and the ground shakes. Boomtower is huge. He knocks them down. They call the Megazord and fight Boomtower. They lose. Javi calls the zord and it comes out of the ground. Doomtower is about to attack it when Stegozord arrives and hits him with spikes. The Megazord combines with the zord and Javi enters the cockpit. It becomes Dino Fury Megazord Spike Formation. Sun is setting and they fight. They create a shield with their fists and lifts Doomtower to the air. They slam him down. He does another attack and they send spikes toward him. Zayto calls his saber. They do the final attack--Stego Mega Punches to defeat Boomtower. Boomtower explodes. Boomtower arrives to his regular size. Mucus cheers him up. The Rangers run toward him and they teleport away. Javi teleports to Izzy. The trio teleport too. They later all meet at Buzz Blast. Izzy has her arm in a sling. They give him the Keytar as a gift. He thanks them. He apologizes for not telling them about his dad and says he will try to be more open. He plays a tune and everyone comes around to enjoy it. J-Borg is not programed to dance and Jane tells her to loosen up. J0Borg spins around and does it took fast and drills into the ground. She hits a water main and water explodes in their faces. They laugh.

Episode Review:
This shows that you can have a well-written episode and still have silly comedy like J-Borg, Jane and puns about spikes. It's not the best, but still good. I didn't like last week's episode, it was a bit too soggy and sweet. This one shows Javi's moppy side which I do like. Izzy isn't as annoying as she was last week so all in all, good episode. I would've called the episode "Black sings the blues."

Thanks to Hasbro Fan Friday, we found out we are getting four more Metallic Armor Rangers in Lightning Collection to join Kat/Pink Ranger. Each comes with a zeo crystal. Also a Red Sentry from the Boom Comics "Shattered Grid" arc. 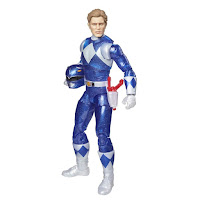 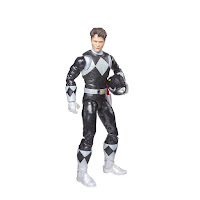 Billy and Adam
Billy remained on the show until Zeo. He also stopped wearing the glasses because the actor David Yost had problems with the glasses they use. 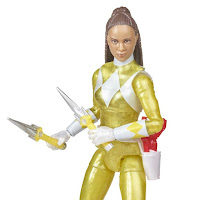 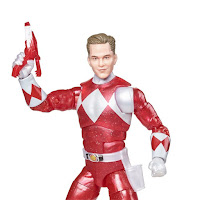 Aisha and Rocky
Aisha seems to have her hair from the end of Season 2. 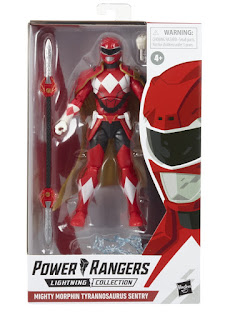 Tyrannosaurus Sentry, no face. In the comic, Skull was one of the sentries. 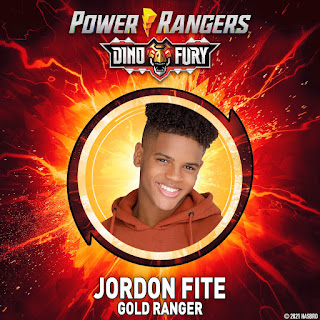 Jordon Fite has been revealed to be Ion/Gold Ranger in Dino Fury. 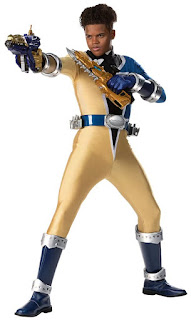 Posted by Lavender Ranger at 7:28 PM No comments: