UPDATED 6/25/15
PARTE CUARTO (4)
Most Kamen Riders are a mix of colors, most likely to differentiate from Sentai. I went for the majority color in suit or if most of the Kamen Riders had the same color suit (like the case in Ryuki and Gaim), then the majority color used to differentiate from them. They are put in order of appearance and sometimes, by series. I added some of the modes and only they if different shade than the original rider (say for example Den-O climax form is not here since it is same color as Sword Form), are displayed here. Because nowadays since Kiva, there are less Riders and the main rider has the most modes. The hardest to place is Kamen Rider Sigurd as he is an even amount of black, red, green and light green. I also split up Blue and Green in lighter colors to make up space since there are so many now. 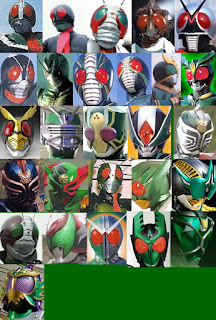 Shades of Green (26)
Obviously this would be the most used color since Kamen Rider started with insects. Kamen Rider Ichigou and Kamen Rider Nigou were both green. V3's helmet was red and used some red in his costume but his suit was mostly green. Amazon's suit was green, X's helmet was silver but his suit was light green, and Skyrider and Shin were green. Zo, and J were a dark Viridian. Kuuga's Pegasus form and Gills was green; and Another Agito had a dark green suit. In Ryuki, Zolda was green. In Blade, Leangle was a dark Spinach green (Myrtle) and Lance was almost a Hunter Green. In Hibiki, Todoroki and Zanki had dark green suits and Kabuki was a bright tangy green. As for the new Kamen Rider The First revival, one of the Kamen Riders is regular green. V3 has a crimson helmet with green suit. In Kabuto, Kick Hopper was green. In Den-O, two of Zeronos' 3 forms were green. While Kiva's Basshaa form (based on a sea creature) was green. The Green cyclone part of Kamen Rider Double is a mix between Gills and Zolda's green shades. Kamen Rider OOO's Gatakiriba Combo is dark shiny green. Kamen Rider Wizard's Hurricane Style is green. Kamen Rider Ryugen of Kamen Rider Gaim has grape-theme so he has grape but has mostly green, kind of hard since the purple seems to be the first thing I think about. 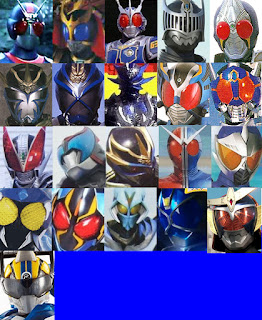 Shades of Blue (21)
Bio Rider from Black RX was completely blue. Kuuga's dragon mode was blue. G3 and G3-X in Agito was cobalt blue. Kamen Rider Knight in Ryuki was unique as he was a dark blue and had some black. Kamen Rider Blade was the first rider to lead a series that was blue (Ultramarine). Ibuki, Danki, and Gouki were different shades of blue. Ibuki was a darker blue than the others. In Kabuto, Gatack was a bright blue like Azure. Den-O's Rod form and Strike form were blue, Strike was darker. Kiva's Garulu form was blue, a bright blue. Amiki, introduced into the world of Hibiki in Decade, is the same shade of blue of Ibuki. The Trigger blue part of Kamen Rider Double is similar to that of Gattack's. Accel's Trail, it is kind of like the shade of blue of the Den-O blue and maybe Kuuga blue. It is almost royal blue. Kamen Rider OOO's Shauta Combo was a dark cobalt blue. Kamen Rider Poseidon was a mix of red and dark blue but his helmet was cyan.  Kamen Rider Wizard's Water Style is bright sharp blue. In Kamen Rider Gaim, Gaim's main mode is majority navy blue with some orange. 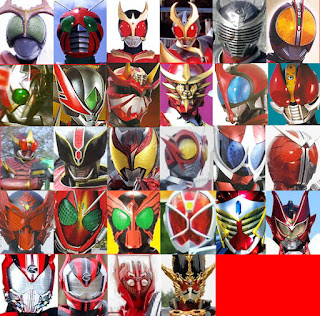 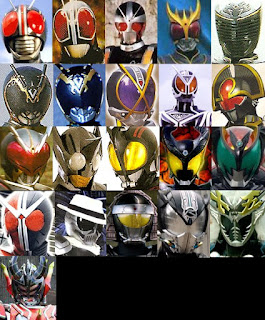 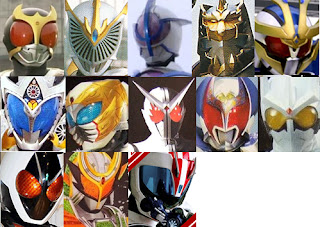 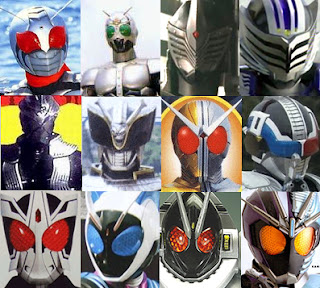 Silver (12)
Super-1 was mostly silver. Shadow Moon of Black RX was completely silver. In Ryuki, Gai was a dark grey and silver and black, while Tiger was silver with indigo. In Hibiki, Shoki (who didn't appear that much in the series) had some silver. Yu-ki from Den-O had a silver form. Double's Metal form is just silver, simple as that. And the G Den-O, he has blue and red but mostly black and silver. Kamen Rider OOO's Sagohzo Combo is almost white. Kamen Rider Nadeshiko's suit is silver with periwinkle while her helmet is black and white. Kamen Rider OOO's Magent State is all silver but he has a black head. I would love to put Kamen Rider Chaser as purple but his suit is mostly silver.

Shades of Yellow (10)
Glaive of Blade was yellow. Nishiki of Hibiki was completely yellow! In Kabuto, Bee was yellow and black and Caucasus was a yellow metal. Den-O's Axe form was yellow for sure.  The yellow part of Double's Luna Memory is a shiny yellow, a bit like TheBee's. And as for the Kamen Rider OOO's LAtortar Combo, his yellow is almost gold-ish. Accel Booster is yellow. Kamen Rider Meteor Storm is a metallic yellow, almost gold. Kamen Rider Wizard's Land Style is yellow. I moved Fourze's Elec State to gold but I still maintain that Meteor Storm is more of a yellow.

Cyan (8)
In Spanish, light blue is called celeste and it is a color in its own right in Russia, Spain and other European countries. In Kabuto, Drake was a light blue, different shade than before. In Decade, Kamen Rider Abyss from the Ryuki World is a cyan and Diend is supposed to be cyan but looks more like a cornflower blue. Kamen Rider Meteor is a metallic cyan. Kamen Rider Fourze's Cosmic State was a bright blue, a neon aqua. Kamen Rider Type Formula has some white and blue but let me consider it blue. Kamen Rider Aqua is clearly aqua and cyan and blue. Kamuro (Lapis) is mostly silver suit but has a lot of light blue accents. 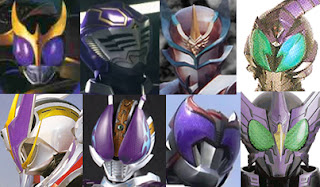 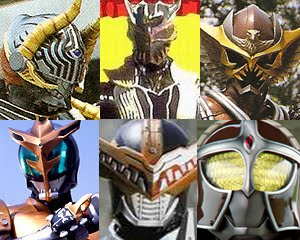 Brown / Bronze (6)
Kamen Rider Imperer had gold and a coffee brown, he was the first brown I suppose. In Hibiki, Toki (who didn't appear that much in the series) had a light orange or brown. Also, Habataki was all brown. In Kabuto, Ketaros was a copper color, like a penny. In Den-O, Gaoh was a bronze color. I personally don't like brown but Habataki looks good. Kamen Rider Gridon of Gaim is brown mostly.

Orange (5)
Kamen Rider Scissors from Ryuki is considered orange but he is like a goldish yellow. Sabaki (Hibiki) was like Vermilion, which is a red-orange. Kamen Rider OOO's Burakawani Combo's helmet is bronze-like but rest of body is orange. Kamen Rider Fourze's Rocket Drill States is orange. I haven't seen the series but in some pictures he has a regular mode helmet but the toys have him in both orange and white helmets. Kamen Rider Bravo of Gaim's suit is mostly black or dark blue but his armor is light yellow-orange.

Pink (4)
I hear Decade is suppose to be Magenta, he looks like a softer tone of Magenta. Raia is a highly debated color, some say pink, I say raspberry red or deep Carmine. Decade is clearly pink, the first real pink Rider. Also, Kamen Rider Marika of Kamen Rider Gaim is pink, a true pink. Kamen Rider Jam is silver and black but mostly pink accents, this was a tough one but I am making the judgment.

Light Green/Olive Green/Lime Green (4)
Kamen Rider Ryuki's Kamen Rider Verde was a lime green, Verde is Spanish for Green. As for the new Kamen Rider The First revival, one of the Kamen Riders is a aqua-green. Den-O's wing form was a light olive green.  Kamen Rider Bravo of Gaim is lime green, regular green and tangy purple.