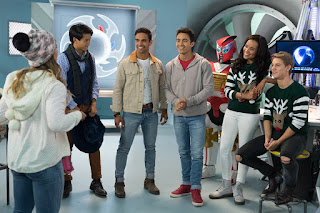 Summary:
Sarah gave presents to the Ranger in the school. The Rangers don't have a present for Sarah. A female cat monster Cleocatra arrives, the cousin of Cat O'Clock. They review what happened with him. She froze the Rangers but Sarah escapes and is saved by Santa. Santa and her travel through time to where she made clones to get Power Stars. She uses a device to enter the lab and talks to her past self. She gets the Pink Ninja Star. Sarah thinks back to when they first met Levi. Brody had attitude of not being a Levi fan and saving him from a villain. Sarah goes back in time. Levi offers a bodyguard job to Brody and Sarah speaks to Levi. She asks to borrow her Power Star.

He gets the Power Star from his manager. Sarah returns to Santa and talks to him about the Ribbon Tree. They protected the tree from men who wanted to bring down the tree. She wants to get the stars from Calvin and Hayley from the tree. She gets the stars easily. She thinks about to when Hayley and Calvin were running for class president. She finds Preston on his own when the rest of the school were having a food fight incited by Victor and Monty. Santa asks for a snack, Sarah says its serious business. She quickly nabs the star and says she needs the Red Power Star. Red Ranger was at the mercy of a magnet of Galavanax who had already taken 5 Power Stars.

Sarah thinks she can't get it from Brody since he had to keep the stars to save everyone else. Santa says she has to try. Brody tells Mick he can't give up. Sarah arrives and confuses them. She asks for the star. He says he can't. Sarah says she is in the same boat as Brody. She says knows it sounds crazy but he has to trust her. He says of course he trusts her. He asks how he saves the future. She says when the time comes, he will know what to do. She returns to the present and unfreezes everyone. They morph and Cleocatra returns. She runs away from them. They catch up with her and beat her up. Red puts on the Lion Armor.  He uses the time device and glows and becomes big. She becomes big too and they fight it out. Robo Red helps too and the two fight against her. He destroys her. Sarah returns the Power Stars to where they go and destroys the controller. She apologizes for getting upset and thinks they are the best present. They surprise her with Santa offering a ride around the world. She loves it and says it is the best gift.

Review:
Santa is the same actor from the Dino Charge specials. Chip sure does love time travel. While Sarah is not my favorite character, the episode had its decent logic.
Posted by Lavender Ranger at 12:31 PM No comments: