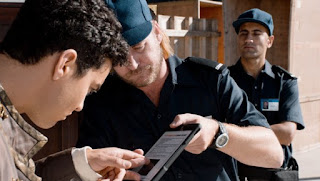 Episode Summary:
Ivan thinks a package is his new training dummy, having signing it with his finger on a tablet instead of ink and feather. Fury has an idea to use Gold Digger and Spell Binder and create Spell Digger, making people greedy. Heckyl likes it and takes Singe's gun and gives it to Fury. Singe is upset at being called untrustworthy. He slashes the clothing into pieces. Kendall is on the phone looking for it, telling Ivan the practice dummy just arrived. Kendall fears and tells her that what he smashed was a valuable antique suit of armor. She is fret, Ivan clearly doesn't understand. Meanwhile Heckyl hands out gold coins to the people of Amber Beach. A man arrives and complains how much the amount of the food to Chase and Tyler. They spot gold coins and grabs them and become greedy and walk off. Kendall and Ivan discuss the problem as the owner Mr. Smith  arrives. Mr. Smith tells Ivan money is what he owes. Kendall tells Ivan the museum doesn't have money lying around. Mr. Smith says he'll but the museum and sell it off. Shelby asks for Chase and Tyler. The two find Heckyl. Heckyl gives the bags to Spell Digger and he puts up an act about having vast treasure. Tyler says it can be a trap, Chase runs off after him. Fury goes after them. Ivan finds Chase and Tyler and is confronted by Fury. Ivan morphs and fights Fury. Tyler and Chase find gold coins. Little Rexy comes to Tyler and they follow after him. Little Rexy bashes Fury and comes to Ivan's side and tells him he brought help. Tyler and Chase are morphed. Tyler goes Super. Fury wraps him in electricity but Tyler breaks it and blasts him. Fury runs off and the trio de-motph and Ivan realizes they are collecting the coin. Ivan thinks it is to pay off the debt. Ivan realizes he would not use monster's gold and runs off. Tyler goes to the Amber Beach Bank and asks for a gold bar that he left for and doesn't have ID. She asks for something with her name on it and he takes out his sword. She presses the alarm and he runs off. 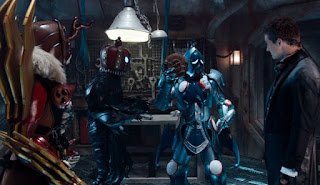 Shelby, Koda, Riley and Kendall go over things they can sell like fossils. Tyler and Chase come full of gold coins. Kendall tells the others not to touch them. Mr. Smith is already figuring out what to demolish the museum. Ivan confronts him and tells him he will sworn to protect him. He tells him that his assistant protects him. Fury recaps Heckyl and Wrench tells him he turns Spell Digger's chest plate will trap the Rangers in a portal. Kendall figures out the coin activates the part of the brain that makes one greedy. Ivan comes and sees the items they can sell. Ivan says they can't be sold. Kendall says the museum is lost. Koda comes up with the idea of using the coins after the monster is destroyed. 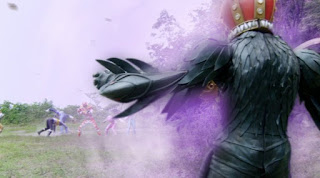 The Rangers go on the trail. Shelby and Riley follow one trail to Spell Digger and morph. They go to the woods and their blasts go into his portal in his chest. The others blast at him. The six fight Gold Digger. He keeps absorbing their attacks. He tries pulling them in. Tyler does Tri-Ankylo formation and goes towards the chest and punches him down. Tyler does final strike on the monster. The coins rain down on them and the spells come off Chase and Tyler. Ivan says the gold that once evil will do good and they disappear. Spell Digger becomes big and T-Rex bites him. Plesio Charge Pachy-Rex formation is made. Ivan goes Dino Superdrive with the others and they fight the monster. Tyler does the final attack with the saber and destroy the monster. Back at the ship, Fury says the monster was a failure. He then hears Singe. 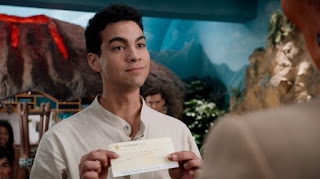 Singe is talking on a communicator device. Fury asks who he is talking to. Singe says his grandmother. Fury says he is not fooled. Back at the museum, the seven await Mr. Smith. Ivan implores him to be generous with his heart. Prince Phillip comes in and says the police said Ivan visited the bank. The gold bar King George gave him earned value and gave Mr. Smith the check. Kendall thanks Phillip. Mr. Smith tells him Ivan would be rich, Ivan says the museum helps the community and honesty has its own rewards. Mr. Smith says to forget it and gives Ivan the money, they fight over it. Mr. Smith has his assistant go after Ivan. 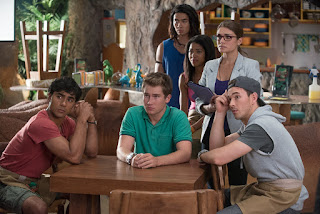 Episode Review:
While watching Chase and Tyler chase after gold coins is mildly funny, Ivan is not a fully dimensional character to fulfill a whole episode. He not only is a fish out of water but also seem to lack common sense. If he is going to a bank, even in the medieval ages, he had to have some sort of proof. And to even hit the suit of armor lacked common sense. I'm not saying Davi Santos is a bad actor but the character is just badly written and flat. And why didn't Kendall intervene with Ivan's check and just took the money in the name of the museum? Yes I am upset that Kendall doesn't transform and helm her own zord but meh, what are you going to do? She's not in the footage and even though they shoot new footage, that would mean another person to suit up and props to place

Posted by Lavender Ranger at 12:49 PM No comments: