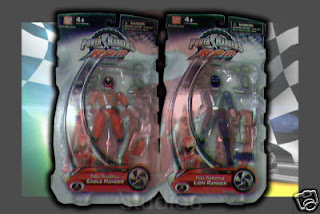 Well, there is finally a title to the 2009 Power Rangers and it is called Power Rangers RPM. So far there has been pictures of the red and blue ranger, called Eagle Ranger and Lion Ranger. In Go-Onger, the red Engine is half condor and half racecar. It has been changed to Eagle, it is unclear if this will be kept for the series. Like all the other logos before it, this logo is better than the fan-made logos, it of course has a tire like the Go-Onger logo but doesn't use all the same colors. 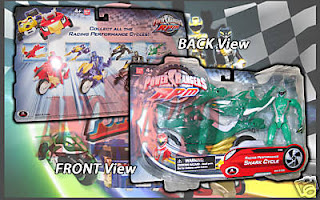 I figured the Green Engine which is Orca/motorcyle would be changed to shark and above it says Shark Cycle for the green (even though it doesn't look like a shark), so there you go. One fan on a board joked that the sixth ranger Go-On Gold (whose Engine is a chicken/helicopter) to be called Chicken Ranger. Now seeing this art work, you start thinking why did people wonder why this wouldn't fit with Power Rangers. I like that in the back view of the toy has the yellow Engine there, the Yellow beast or Ranger were not shown at all in the art work of Jungle Fury. Anyhoo, these bikes look great, fortunately we won't be having 'new' rangers this year.

Posted by Lavender Ranger at 11:21 AM No comments: