Hyakujuu Sentai Gaoranger (2001) take became Wild Force, Hyakujuu means a hundred beasts, and in the final episode, there is actually 100 animals. Here is the official list from Toei, the Sentai robot design concept book showed early sketches and designs. The order they are in is not the order they appeared on the show.

An early design for Gao Hunter (Predazord) had an Aligator, Scorpion and a Bat. 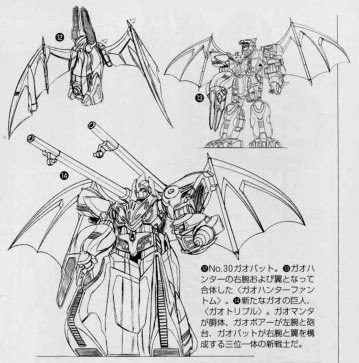 Gao Triple (Bottom)
In this sketch, the Boar is the left arm and the cannons and the Stingray is the legs and the Bat is the right arm.

These scrapped designs show 13 other Power Animals, we had 25 in the series, we would have near 40 of them. It would had made sense to make a sequel series to Gaoranger to place all these Power Animals, but Gaoranger wasn't that great of a series nor as popular, so it is understandable it had no spin-off. The designs look awesome though.

GaoVulture is still a reference to Jetman, since the condor was already picked for GaoGod, so they went with the closest thing.

are their pics for all of them

Apparently GaoApe was released as a repainted GaoKong in grey/black.

There's also supposed to be a release of most/all in black, a white gaolion and a chrome silver series, but it's difficult to find a full list of options.

Conversion of a pair of Bear mechs to GaoPanda is fairly easy with blades to scratch off the paint on the ears and front white feet (difficult to paint over, and the front feet are rivetted in).

The Lions (both red and black) are apparently designed to split, but the function has been disabled in the molding process and a lot of units were glued shut, but it is possible to disassemble and re-add the splitting function. Doing so allows the lion to open to about 70 degrees, and/or it seems likely that a clip could be used to attach the Peacock or Manta over the thinnest part of the lion's torso.

I'd also guess that GaoMammoth turned out to be too expensive to manufacture, so the Large Gaolion was hastily written-in as an alternative.