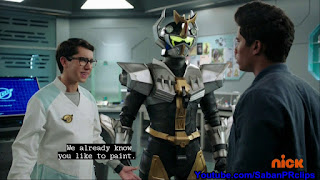 Episode Summary:
Ravi paints a mural. His mom jogs nearby and he pretends it isn't his and he saw the real artist run away. Back at the base, Ravi washes his hands. Nate and Steel ask what he was painting. Ravi lies to them, tells them he was painting his house. Zoey and Devon tell them to look at the news. His mural is on the news. Devon tells him it looks great. A crowd is at the building and Ben gives Betty a boost to take a picture of the painting and get on a skateboard. Betty grabs unto a light post. Ben crashes into a hot dog stand. Betty stays on the lamp post. Zoey and Devon reveal they know it is Ravi's painting. Ravi admits it and Nate and Steel hear this. They ask him why he lied. Nate shames him. Ravi says lies are a reflex. 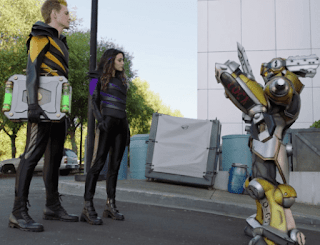 Roxy and Blaze make a Robotron out of a key and lock. They want him to enter Grid Battleforce, he opens a gate up. Ravi finds the Robotron. Ravi morphs and fights after a civilian fight. The Robotron locks his weapons. Gold and Silver appear and fight. The three of them follow Robotron outside and fight. Robotron falls down some stairs and runs away. Red and Yellow arrive and Robotron teleports away. Back at the dimension, Robotron explains what happened to Evox. Evox and Scrozzle don't like Blaze and Roxy's plan. Roxy explains about Ravi lying. Scrozzle comes up with the idea of making explosive paint and disguising Keytron as the mystery painter. Keyton says he wants to do an accent. 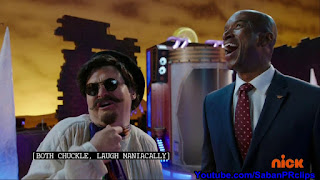 He becomes a stereotypical French painter (played by Kelson Henderson). Evox becomes the mayor again. Back at GB, the mayor has people bring in the explosive painting to make a mural outside of the GB base. They wanted the same artist and the Rangers are surprised to meet the artist--who is claiming he was the one. Ravi says he never saw him before and his mom finds it strange, poking holes in his lies. Ravi lies again. Ravi says the guy is taking credit. Zoey wants to tell the commander. Ravi says it means so much to her and he doesn't want to let her down. The Rangers tell her the truth. Nate keeps shaming him. Ravi agrees to tell the truth. 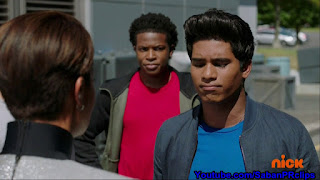 The Rangers run in before they paint. Ravi says he is an imposter. He admits he lied and admits he painted the mural. She at first doesn't believe him and he shows her his initial painting. She is upset that he was lying. The Tronics try to spray paint on them, they jump out of the way and the paint explodes. The painter and the assistants reveal to be Keytron and the Tronics. Mayor lies he didn't know and runs off with the Commander. The Rangers morph. Keytron locks their comms so they can't call the weapons. The Rangers fight. 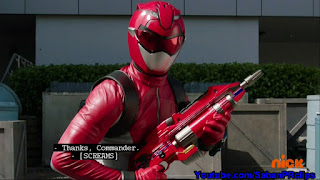 Evox transforms back in the dimension and gets Morph-X. Commander is the GOAT and comes in with more weapons so they defeat Keytron. A new Gigadrone comes in and the Ultrazord is formed. Gigadrone makes another dome thing. The Keydrone locks Ultrazord. Gold makes them fly in the air. They drop down on the drone. The drone gets up and its key is broken. Their systems are back so they transport the Cheetah Blaster and destroy the Gigadrone. The dome fades. Back at the base, Ravi and his mom have a heart to heart. She doesn't like he lied. He said he was afraid she wouldn't approve as she said painting was a waste of time. She tells him her attitude didn't let him be himself and he can tell her anything. She wants to know what art makes him feel. He says it makes him happy. She promises to support whatever makes him happy. She has him sign his original mural. People applaud. She proudly says her son did it and tells him she is proud. Firefighters try to rescue Betty but she jumps up and down the trampoline. 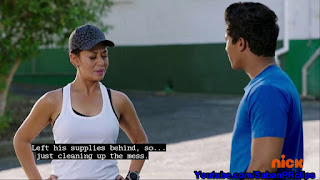 Review:
I don't like Nate lie shaming everyone. It is not like Ravi lied about killing a man. I love the Commander's final thoughts to Ravi. A lot of time what parents say or do affect their kids. It is good she said she will support anything that makes him happy. It not only a good message for the kids but to parents as well. Some parents get stuck on their doctrines and not what makes the children happy.
Posted by Lavender Ranger at 10:57 AM No comments: