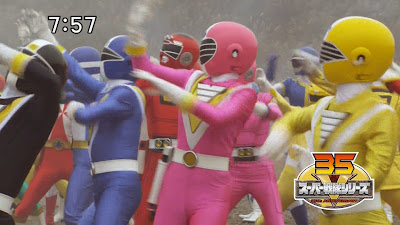 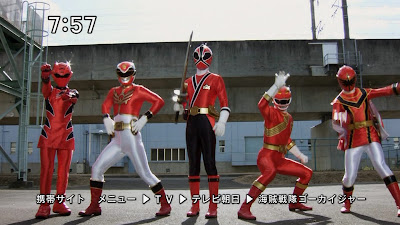 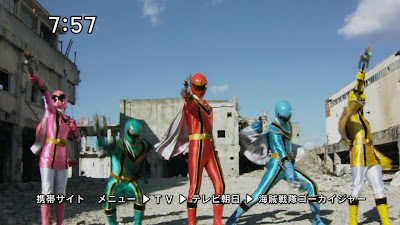 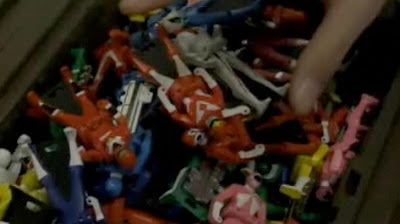 They have a treasure chest full of Ranger Keys. I think I see Red Hawk, Shinken Red, Geki Chopper, Bouken Red, Magi Pink, Red Ninja, Go Pink, Geki Blue (?) and Magi Blue. I envy the prop makers. They probably only made 50 or more keys, not all 167 keys (34 teams)--I think this because maybe they didn't have time to make all the keys and/or it would be overkill to ask the props department to make so many keys if not all will appear on screen at once. I figure when they send these keys cover to New Zealand for Power Rangers, that they have to sort them and take out any that aren't for Power Rangers. At first, I thought it would be hard for them since they aren't familiar with Sentai, but a lot of the stunt people are Japanese and know about Sentai, so they can help set them apart.
"Video games for Nintendo Co.’s Wii and DS will be released this year, and a movie may follow in time for the live-action series’ 20th anniversary in 2013, Dekel said."
http://www.bloomberg.com/news/2011-02-07/saban-reboots-power-rangers-with-new-shows-to-recapture-glory.html 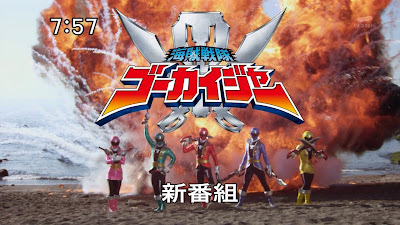 You can see the promo here:
http://www.tv-asahi.co.jp/go-kai/contents/next/cur/index.html 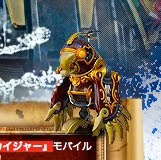 Picture above from some unknown site Sungel (Rangerboard member) found on a board. 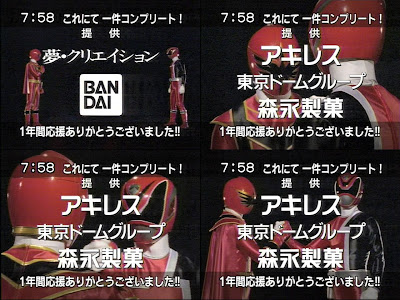 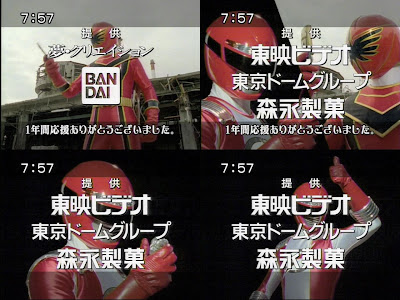 Magiranger to Boukenger
They call each other. Magiranger outside and Boukenger in black background. 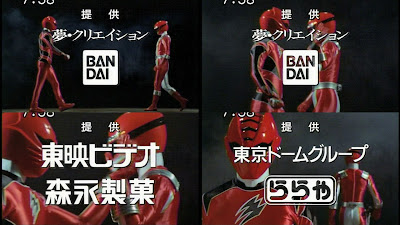 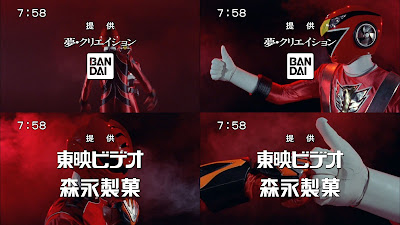 Go-Onger to Gekiranger
With red light and black background, their fists meet each other, Go-On Red with thumb up. 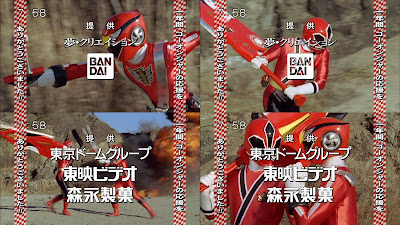 Go-Onger to Shinkenger
Outside, they race towards each other with their weapons. 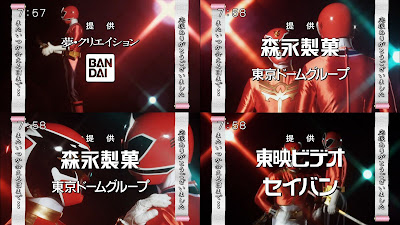 Shinkenger to Goseiger
In black background with red and green lights. Gosei Red pats Shinkenger on his left shoulder. Gosei Red is noticeably shorter, as the new sit actor is shorter. 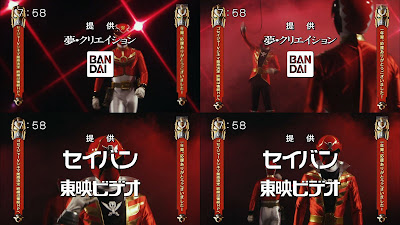 Goseiger to Gokaiger
Gokai Red drops in with a rope and high five in a black background with red lights and red mist.
Posted by Lavender Ranger at 6:36 PM 4 comments: 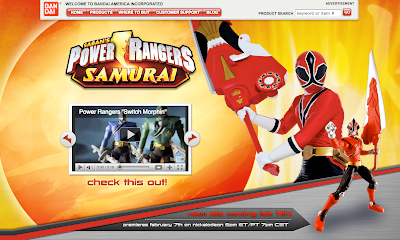 http://www.bandai.com/powerrangers/samurai/
Posted by Lavender Ranger at 3:59 PM No comments:

UPDATED 4/5/11 6PM EST
Non of these warrior and allies had toys and they only appeared in one or two episodes and they are rarely mentioned by Toei or fans.

Arashiyama Misa
The Commander's daughter. she transformed into "Shiro Bara Kamen" - white rose mask. she was also Commander Arashiyama's secretary and took care of the talking dog Shee Shee. She got her own figure in th Girls in Uniform collection.

Magne Senshi (Bioman)
A Tarzan-like friend who liked Yellow Four, he was experimented on by the villains into a warrior, who was being controlled and fought the Bioman. He then defected and fought alongside them. He appeared in two episodes.

Commander Ibuki (Changeman)
The leader of the EDS who seems cruel at first but has a caring side too. Eventually, he is revealed to be Yui Ibuki of the planet Heath Star which was destroyed by Gozma.

Nana (from Changeman)
A young girl from the more advanced Planet Rigel with superhuman abilities, she used in tipping the scale for Gozma for when Rigelian girls reach a age they release a massive energy which would give whoever is caught in its path. Though aged by 20 years old thanks to Giluke's scheme to become stronger, Nana gains telepathic abilities along with heighten physical abilities. 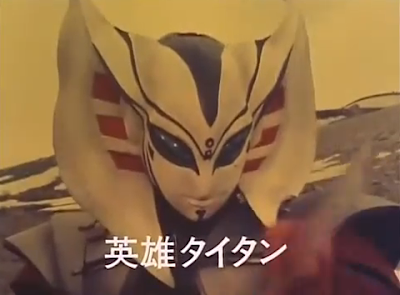 Flash Titan (Flashman)
A legendary warrior of the Flash Stars. He is the one who the Flash aliens based their Flashman technology and mecha after. He was an honorable soldier who tracked down Mess from planet to planet in order to stop them. As a result of his travels away from the Flash system, he developed the Anti-Flash Phenomenon and died while in battle with Baraki.

Dan (Jetman)
Dan is young and curious, he falls in love with Ako. Dan can change into a 'birdman' form and does so to avenge the murder of this friends and duels Radiguet. Radiguet stabbed him in the gut and he dies in Ako's arms as she makes him a ring out of daisy for him. He appeared in 2 episodes. He later played Dan/Tricera Ranger in Zyuranger.

Neo Jetman Team
A team created by Supreme Commander Ichijou to replace Jetman. They received powers from Birdonic Reactors implanted in their bodies. J1 is armed with Neo Sword, J2 is armed with Neo Stinger scythe, and J4 is armed with Neo Slicer boomerang. They are all wield Neoshooter guns and Neomine grenades, and their group attack is brought from their Flarebuster twin cannon. They locked in a room with Meteor BEM by their commander. They eventually gave their Birdonic energies to Jetman, whose own Birdonic energies had been stolen by Meteor BEM. They appear from Episodes 40-41.

Kujaku (Dairanger)
A follower of the Mahamayuri Vidyaraja, the Peacock Buddha, and a master of kenpo. She was Gaja's rival and they had a long personal history. Shishi ranger (green) loved her.

Lunajel (Magiranger) / Gatekeeper (Mystic Force)
She was a Sky Saint in Magiranger, this giant form appeared in one episode but she appeared in a handful of episodes. She had no memory of who she was and when she got in back, she was harsh to the Magiranger team. She fought Wolzard on her own, he kidnapped her and opened the gates of hell. In Mystic Force, Clare took the spot of her deceased mother to fight Koragg but was kidnapped and made to open the gate.
Posted by Lavender Ranger at 1:30 PM 2 comments:

(This was written in February 2011, before the Extra Hero Keys appeared)
Now that it has been established that the sixth Gokaiger is Gokai SILVER and that his henshin device includes the faces of 15 past 'sixth rangers' such as Dragon Ranger, Kibaranger, King Ranger, Mega Silver, Time Fire, Gao Silver, Shurikenger, Abare Killer, Deka Break, Magi Shine, Bouken Silver, Go-On Gold, Go-On Silver, Shinken Gold and Gosei Knight.

18 heroes that could be counted that does not include Gokaiger to be 200. 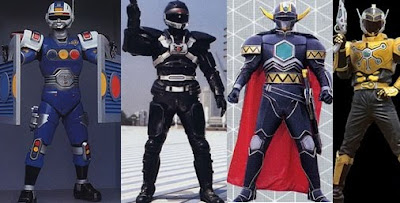 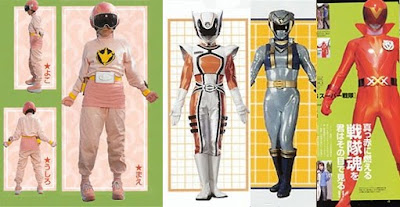 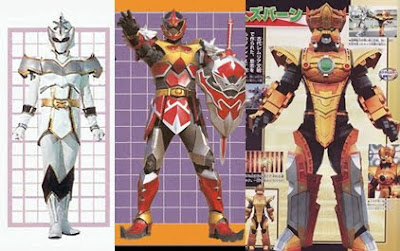 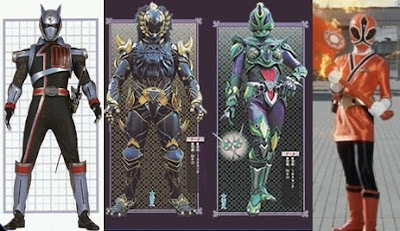 I also think there could a 7th hero, an Extra Hero who becomes past extra heroes, maybe it excludes Deka Swan, Deka Bright, MagiMother, Magne and Mask X-1 and just the heavy armored ranger-like extra heroes like Ninjaman, Gunmajin, Singalman, VRV Master, Bull Black, Demon Hunter Seig, Wolzard Fire and Zuuban (9). Or maybe Demon Hunter Seig will not be included. I know people love Rio and Mele, but most likely they are counted as villains. If the villains do not become past villains, then maybe the Gokaiger in some form will become them. 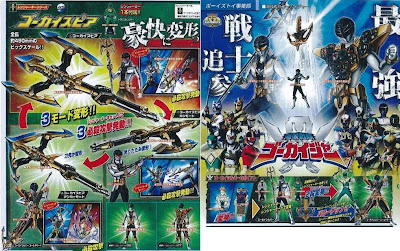 I was impatiently looking for the Sixth Ranger info and a few minutes later rewarded with pics on the new sixth ranger. Gokai Silver that becomes "GokaiSilver Gold Mode". Gold Mode will be sold as #7.

I knew he would be silver. So I guess Bull Black is officially not considered a Sixth Ranger. I am sad that the first ever sixth, Mask X-1 is not included. 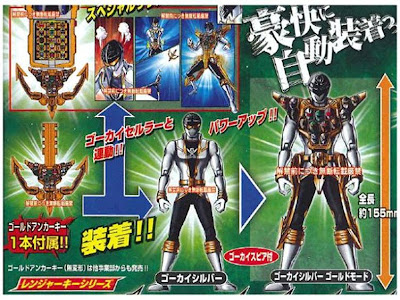 So now there are 6 'Silver Warriors' since Toei counts Gosei Knight as silver. Him being Silver confirms the theory that all anniversary 'seasons' since 2001 we get a Silver Ranger. Gokai Silver has on his chest 5 Silver Rangers, 3 White, 3 Gold, 2 Green, 1 Black and 1 Red.

Chest Bottom: Gao Silver, and Deka Break
I am glad that Go-On Silver is included. 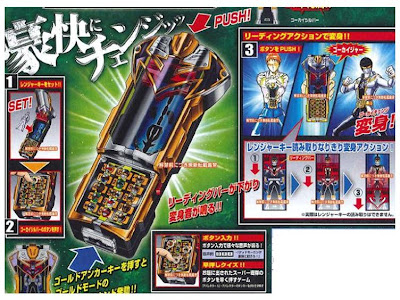 Fifth Row: Gao Silver, Time Fire, Deka Break
Seeing that the cellular has Go-On Silver and Go-On Gold on the same key, most likely Go-On Silver will magically appear next to Gokai Silver as Go-On Gold. 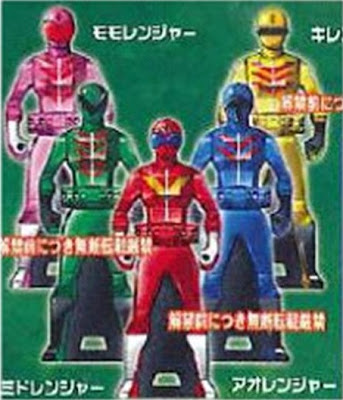 Dukemon22 says:
Steps for transforming:
1). Insert Ranger Key (In Ranger Form)
2). Press corresponding button
3). Push the top of the phone, causing the reader (the red anchor thing) to move down over the Ranger Key, reading it. SFX Sounds.

Some people are complaining that GoseiKnight is counted as a sixth ranger because he wasn't human, and in build, he is a lot like BullBlack, but promotionally he was considered a sixth ranger and that's the way it is. Technically Shurikenger had no human form we saw, because after he became Shurikenger, he lost his human face. And with the 15 helmets on his chest, he is being compared to Decade Complete Mode.