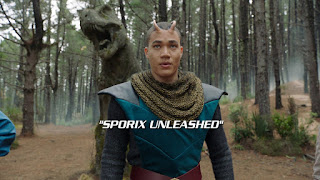 They practice morphing but Ollie and Amelia keep getting it wrong. "Link to the Morphin Grid" is the morphin phrase. They ask questions. Zayto says they lost the other Ranger keys when they lost the Rangers. They have Boost Keys which are upgrades. They then teleport back into the base. Amelia asks who names the zords, they get no answer. They find Void Knight's scanner which Ollie fixates on. He says if they can find all the Sporix, combine with her mom's drone, to find the Sporix. Solon says it is dangerous to mix alien tech with human tech (but isn't that what they are already doing?). They arrive in the city, Zayto says it has changed. They tell Zayto to blend in. Zayto makes them disappear. They arrive to the park headquarters. Zayto says no one can know they're Rangers. 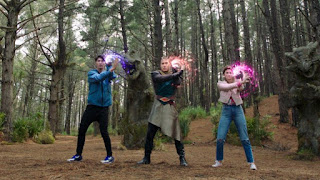 They meet with Ollie's mom and the warden. They are banned from Dinohenge. They tell the truth about Sporix but the warden doesn't believe them. Ollie tells his mom about the Sporix and shows the energy scanner, going against Solon's wishes about the drone. Later, Amelia's boss Jane shows her new assistant J-Borg, from Hartford RObotics (PROO reference). Amelia has arrived with Zayto. The robot finished but made a mess. She then stacks the papers rapidly. Everyone applauds. Amelia approaches Jane. One lady shows a video of a Sproix running after a victim. Zayto wants to know the location. Void Knight and a Sporix arrive. He finds a forcefield and Ollie and his mom. They hide. Ollie and mom try to lift the scanner. Zayto tells Ollie a Sporix hatched. Ollie tells his mom and leaves. Void Knight tells his monster to get the scanner and he has a plan. 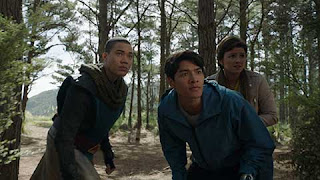 Ollie, Amelia, and Zayto face Mucus, the female Sporix. They morph. Zayto slices Muscus into slime. The monster from the last episode arrives and they fight it. Zayto uses the Stink Dino Key--a boost key and uses Stink Boost and throws a stink bomb which the Rangers don't like. The monster beats him. Mucus arrives. The Hengemen fight them. Mucus and Shockhorn fight. He answers to Void Knight. They teleport away, Mucus said she likes taking orders. The Rangers arrive to the base. Amelia wants to try the Boost Key. Zayto says people need to be warned. There is an alert. Ollie says they going along with his drone plan which the others don't. They teleport to Ollie's mom and she is surrounded by Void Knight, Mucus, and Shockhorn. They morph. Ollie's mom wraps a rope around Mucus and uses her drone. It explodes on top of Shockhorn.

Shockhorn flies away. The scanner is destroyed. The Rangers stop Void Knight and he teleports away. Blue asks Ollie's mom if she is okay, she says he sounds familiar and he says no. She thanks him. Zayto says he will activate his zord. Shockhorn grows big in the city. The Rangers teleport and use the Boost keys. Zayto and SOlon deploy the T-Rex Champion Zord from the base. Pink uses the Gravi Dino Key and uses the Gravi Ball to attack and hold SHock Horn. Ollie uses a key and tries flying at him but is knocked down. The zord arrive sand roars. It knocks Shockhorn down. Red activates Battle Mode. He teleports in the cockpit and fights Shockhorn. Tail detaches and does tail lash. Then the head detaches and uses Mega Fury Saber. He does the Champion CHomp and destroys the monster. Tagline is Dino Fury Victory. Sporix eggs goes down. They go down to get it but Void Knight catches it and leaves. It will be stronger. They go back to base and de0morph. Zayto says they fought well. Ollie learned his lesson and apologizes. Zayot as Red Rnager sends a message through TV about the threat. Mucus and Void Knight find a base out in the woods, called Area 62, a facility abandoned long ago.

Dialog? Good. Logic and reasoning? Good. But overall pacing suffers again by timing. Some parts feel rushed, some are perfect. The show benefits from teleporting again. The moralizing is not as bad but Ollie’s realization came tacked on. The show suffers from short runtime.