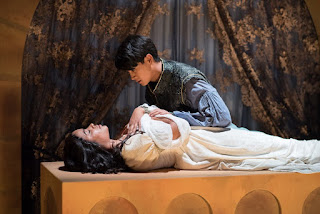 Episode Summary:
Calvin notices a female necklace Preston has. Preston and Hayley are being mysterious about their drama class and Calvin doesn't know how to feel about it. Meanwhile the Galactic Ninjas arrive at Galaxy Warriors. Hayley is worried. Preston helps her out, they are keeping a secret they will be in Romeo and Juliet, The drama teacher comes and they practice the death scene. Victor and Monty come in. Victor in Shakespearen clothes and acting hammy dramatic. The teacher berates him for not auditioning three weeks ago and lets him be the understudy. They figure they can do something to Preston to be the lead. The teens reunite. Calvin notices the necklace Preston had earlier, on Preston's neck. The others notice Calvin is not feeling well. He tells them they are spending a lot of time together.

The others tell Clavin to talk to them. Calvin and Sarah see Preston and Hayley holding hands and Hayley kisses Preston on the cheek. One of the evil ninjas arrives and attacks the duo. The rangers lose their memories except for gold pink and yellow and they fight the monster and his minions. He then takes pink memories. He threatens Yellow and leaves. Gold beats the minions, thy take the test to the base. Meanwhile Monty comes up with a crate to send Preston to Africa. Victor and Monty gets lock  in and shipped away. Meanwhile the others discover the base. Calvin and Mick talk about what he thinks. He drops a game rob his foot. He says it will be replaced. Calvin tells him he is jumping to conclusions.

Calvin and levi trick the monster with the scarecrow technique and they get the memory orbs she return then to the Rangers. Mick runs off the Rangers morph. They fight, he grows big, they call the zords. Wolfermean runs off and they get out of the zords. Sarah encourages Calvin to talk to Hayley. Later Preston and Hayley perform at the play. Calvin apologizes and Hayley says he is cute when jealous. Meanwhile, Victor and Monty find themselves in Africa. 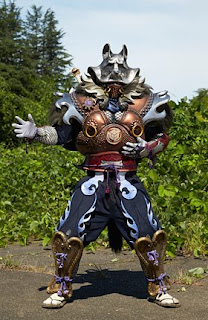 Episode Review:
Interesting to have themes of death, romance, infeldity and jealously in Power Rangers which rarely happens.
Posted by Lavender Ranger at 12:39 PM No comments: