Late last night or early today (considering your time zone), producer Simon Bennet revealed Power Rangers Dino Fury will continue in the third season called Power Rangers Cosmic Fury. At Power Morphicon today on August 28, 2022 (the 29th anniversary of Mighty Morphin Power Rangers), the Dino Fury cast was interviewed in a panel to reveal they know almost nothing about the new season. Here is a breakdown of the information and speculations and one spoiler from Dino Fury.

Things we yet to know:
SPECULATIONS: 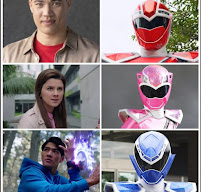 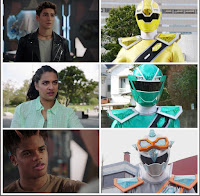 If Kyuranger is used, the Rangers could fall in their color slots.
Red - Zayto
Blue - Ollie
Pink - Amelia
Gold - Aiyon
Black - Javi
Green - Izzy
Purple - Terrick
Now the rest is just my speculations:
Orange - Blair (singer from one episode)
Silver - J-Borg
Yellow - Aquitarian (not one specifically, could be new character)

Or they could go for budget and use the Kyuranger character suits and use the footage. Blue, Black and Gold have creatures so they can keep those. Pink and Purple were also costumed characters too. Then it would be...
Red - Zayto
Yellow - Ollie
Pink - Amelia
Orange - Javi
Green - Izzy
Silver - Aiyon

Blue - a wolf alien
Purple - Terrick
Black - a bull robot
Gold - an android
Or they could use the same Dino Fury costumes.
SPOILERS AHEAD:
Read more »
Posted by Lavender Ranger at 6:27 PM No comments: