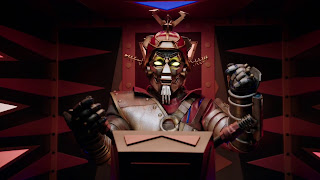 Episode Summary:
The Rangers and Beast Bots set up the Christmas tree in the headquarters. The Beast Bots want to spend Christmas with them but unfortunately, Nate is busy, Zoey will spend it with her mom and grandmother, Devon with his dad and Ravi with his family. The Rangers get a call and leave. Jax remembers when Zoey's mom helped with the Morph-X Bikes and then when Zoey's mom had a chance to reveal the Rangers' identities and chose not to. Chase remembered about Devon's dad. when Devon got a job at a carwash and how Devon's dad went to save Devon. Smash remembered how Ravi's mom reprimanded Ravi about going after Roxy and losing the Megatransporters. 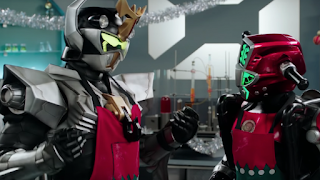 Scrozzle comes out of the woodwork and the Rangers morph. Scrozzle zaps Nate into a tree ornament. The Rangers fight. Steel tries to get help. Devon and Zoey can transform into tree ornaments too. Steel and Ravi manage to get Scrozzle to leave and take the tree back to the base. In the base, Steel accidentally turns Ravi into an ornament too. The Beast Bots feel bad. The Rangers remind them on how they helped before Nate reminds Steel about how he helped when the Steel imposter broke Nate's computer. Zoey reminds Jax on how he stood up to a Robotron. Devon reminds Chase on how he saved him from danger. Ravi reminds Smash on how he saved him from Turbotron. The Beast Bots go to use the Zords against a new Gigadrone.

Nate helps Steel fix the tree zapper. The Beasts Bots fight and destroy the Gigadrone (and in turn destroy Scrozzle) with their zords. Steel releases the Rangers. The Rangers surprise the Beast Bots with a trip to the North Pole with Santa.

Review:
Cute episode but the blandness of colors from the Grid Battleforce base set makes me a bit dizzy. And the sitcom-like framing also makes me a little sick. The Dino Charge set at least like a cinematic-type environment. As clip shows go, this one had a story. I wish Scrozzle had a one to one battle instead of a Gigadrone death like Blaze.  I like how the Beast Bots got focus in this episode.

Posted by Lavender Ranger at 1:05 PM No comments: