[I missed last week's episode, if it is on Netflix next month I'll review it.] 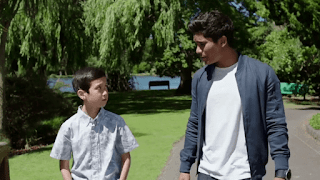 Summary:
Ravi is drawing a boy playing the tuba. Bullies bully the boy and he throws away the bully. Ravi talks to him. The boy says it's stupid. Ravi says his granddad played in a Jazz band. They shake hands. Ravi offers to train Joey. The boy leaves. Roxy arrives and takes the tuba. Tuba becomes a monster and Roxy gives him the chip to collect the Red Ranger's beast power. The Rangers morph and fight the monster. The monster blasts them with sound. Roxy fights the Rangers as well. Roxy goes into "Ranger mode." Red fights Tuba, Robotron bumps into Roxy. They retreat. They return to Scrozzle who tinkers with the Tubatron. 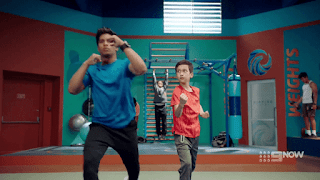 Nate is fixing the detectors to detect Tubatron's sound waves. Back at Riptide, Ravi and the little boy Joey meet to train. Joey can't get the tornado kick right. Ravi gives him a pep talk. Joey says he shouldn't throw away the tuba. Ravi tells him to see him tomorrow. Back with Scrozzle, he upgraded Tubatron.  Roxy wants Tubatron to blast Blaze. Blaze objects but gets blasted into the brick wall. Roxy is giddy. Back at the base, Ravi polishes tubas and instruments. Ben and Betty play around with the instruments. Ravi says they belong to his grandfather. Commander says a Power Rangers cannot have distractions. He tells her it is for a friend. She says there is more important things to do. Betty tries to unclog the sax. Hilarity ensues. Ravi keeps training Joey and shows him a sketchbook. Joey sees the drawing of him and Ravi and he puts them away. Ravi says he is not an artist, it is a distraction. He gives Joey the tuba. Ravi gives him another pep talk. Joey plays the tuba and the detector catches it. The Rangers find Joey. The Rangers get blasted by Tubatron who has arrived with Roxy. The Rangers morph. 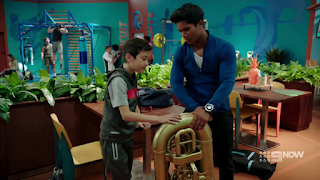 Joey watches the Rangers. Devon uses his beast power and gets blasted back by Tubatron. All the Rangers go down. Nate thinks of making a similar soundwave. Joey hears this and goes in front of the Rangers and he blasts at the monster. The monster goes down, the Rangers go up and blast him. The upgrade goes off. Silver and Gold protect Joey while the main trio goes after Tubatron. They avoid a blast and the chip falls off amd Roxy takes it to Scorzzle. The chip is fried and Roxy is mad. She asks for a Gigadrone. Gold records the sound of Joet's tuba. The Rangers fight the Tubatron. Tronics arrive. A van is dispatched. The trio destroys the Tubatron. 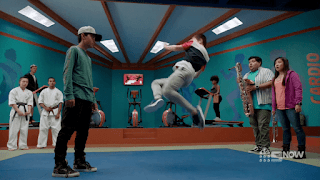 Tubadrone and the zords are deployed. Nate uploads the data file to the zords to use against Tubadrone. It sends sound and Blue does too, they cancel each other out. They freeze the Gigadrone and Red uses his blaster and they destroy it. Joey tells the trio about it at Riptide. Betty and Ben come with instruments. Thet both sound horrible. The bullies from before come and take Ben's instrument and white goo splash on the other bullies. The main bully is upset. Joey stands to him and does te backflip kick on his hat and he leaves. Joey framed his drawing. They hug,

Review:
Doesn't Joey look like one of the kids from All That (2019)? Also, why didn't Ravi have Joey take out the tuba from the trash? That's the first thing I would've done! Oh, Ravi, haven't you become genre-savvy already? Nate has. I guess it is just one genre-savvy ranger per season. Jayden was the one for Samurai and Dino Charge Rangers had their moments. And that's about it, Megaforce and Ninja Steel didn't get the memo. Mick was pretty genre-savvy but not sure if he counts. Joey stood up to the bullies but with martial arts, not his tuba. I would've liked it better if it was with the tuba. Like playing really well, not blasting him...

GRADE: C
Posted by Lavender Ranger at 8:31 AM No comments: