The Rangers are in their Megazord fighting an Attackbot and it makes an oil spill making it slippery. They are split apart. Ziggy says he should have called in sick. Dr. K makes a long comment on how he isn't sick. They make ValveMax and High Octane and destroy the monster. At the evil lair, Venjix uploads himself in a new body (Hiramekimedes) and plans for the Rangers to come to him. Back at the garage, Summer hypnotizes Dillon to get more answers from his past and Dillon berates Dr. K for unleashing the virus but it seems everyone else has forgiven her.

He is hypnotized with his musical clock and is in front of the Venjix pole and sees himself with a woman in a place called Kenmore, so he wants to go to Kenmore. They find out Kenmore is far away from Corinth but the Rangers want to go anyway. Colonel Truman is against it but Scott tells him he is going to go regardless. So the team is on a road-trip in an old RV belonging to Colonel Truman and it was supposedly built in the 70's. It is actually the Go-Onger bus Ginjiro Number One, the home and base of the original Japanese counterparts of the RPM Rangers. The producers left the Go-Onger name on the bus and it is referenced by Flynn, Scott gives the logner name for it as it is an acronym in this universe.

They lower the shields and heads off, only to in counter Venjix himself (though they don't know it is him) and a barrage of Grinders, who he powers-up. They destroy the Grinders and Dillon recognize Venjix's voice. Venjix reveals his identity. He calls for his sword and he fights Scott. The others surround him when Scott is knocked down. Dillon's gun is used against Summer. Flynn and Dillon are then flung down. Green and Yellow fight Venjix to no avail. Then Venjix attacks them all with his main chest weapon. They all de-morph. Venjix calls for his ship. The five 'fall back' and run in the bus.

To use the footage of the original footage, the ship chases the bus, but the beautiful green Japan has been doctored to look like an American wasteland. Venjix leaves as the Rangers stay in a tunnel like in the original episode (15). It is Scott's call and they form Zenith Megazord. Venjix comes in his ship and blasts at them. They split into their six zords and go 'airborne' which means they all give Red a boost to fly and attack the ship. The ship splits into five. Then out of the mountains, two new Zords appear. The two Zords attack the bad guys. We hear familiar voices. Venjix is surprised and shocked. Gold asks Silver if she is hungry, she says she is starving.

The other ships are destroyed. Ziggy is impressed. Flynn wants to know who they are. The two generals fret over the death of Venjix, Tanaya thinks she should be the new leader, the three fight for the job. Tenaya thinks there should be a fair way to figure it out but Tenaya beats the other two up but Venjix arrives in his pole, saying he is immortal and brings in a new copy of the same body and enters it once again. He says that the Power Rangers are walking into his deadliest trap yet.

Review:
Ingenious to use the Ginjiro Number One a.ka. Go-Onger bus. I also like how they kept the name in order to honor the series. Making Venjix into Hiramekimedes is interesting, I am sure he can download himself into other bodies when the Hiramekimedes footage runs out. It is interesting how they mixed Episodes 15 and 16 and in a different order. Because in Ep 16, Hiramekimedes powered up the Oil Banki, which did not happen here. Also, I want to know if Venjix is really as dark as he is promised to be or just like every other main male villain.

UPDATED 5/17/10 8PM EST
In order to dispel any more confusion, which I thought stuff that was pretty clear but I suppose it was not. Super Sentai teamups started in 1977, there was JAKQ vs. Goranger and a couple after that but it did not become an annual thing until Ohranger vs. Kakuranger. In Power Rangers, the first teamup started with the Zeo Rangers and Alien Rangers in "Rangers of Two Worlds Part 1 & 2" and did not become annual until Lost Galaxy and Space Rangers in "To the Tenth Power."

There was no team-up between Wild Force and Ninja Storm in Power Rangers Ninja Storm becuase Ninja Storm was the first series filmed in New Zealand and there was cost problems and cast costs didn't let them do it. Bascially they couldn't afford to fly the Wild Force Rangers. Hurricanger vs. Gaoranger did happen and the Elephant, Tiger and Shark merged with the 'Ninja Storm' megazord. 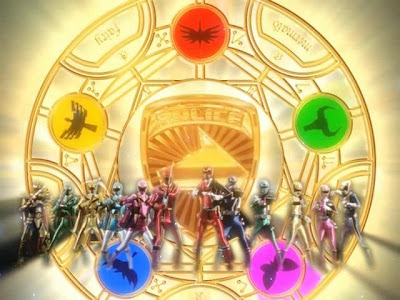 Mystic Force and SPD team-up never occurred, what did happen was the character Piggy appeared in the episode "Ranger Down" and met Jenji. Some optismtic fans thought this meant it was just a sneak-preview to a real teamup but what it really was the closest thing to be a teamup because the actor who played Piggy also played Toby so he was on the payroll. The reason it didn't happen was because of budget cuts. They had decreased the episode count in that series. I believe it was also about money to get the SPD cast because majority of the SPD cast was from Canada and the United States. In Magiranger vs. Dekaranger, the SPD battlizer appeared, which it is the first Battlizer to ever appear in Super Sentai because Super Sentai has no battlizers. Battlizers originated in Power Rangers. 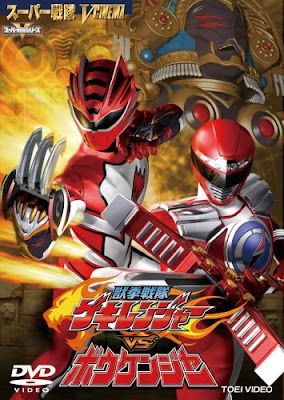 Jungle Fury and Operation Overdrive teamup didn't happen because of costs once again. Also why the Red Ranger didn't get a Battlizer. What he got close to was the cycle armor. In Gekiranger vs. Boukenger, we got GekiRinToujaWolf--which also appeared in Go-Onger vs. Gekiranger but did not appear in Jungle Fury. 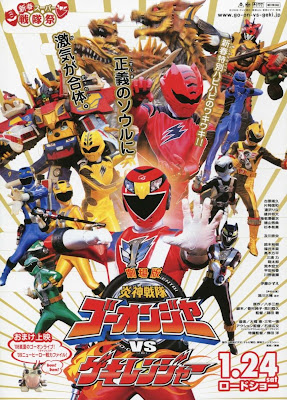 There was no RPM and Jungle Fury teamup because of budget cuts. The closest thing we got was the Jungle Karma Pizza place briefly appearing in Corinth in the episode "Ranger Green."

The Long Line of Alphas 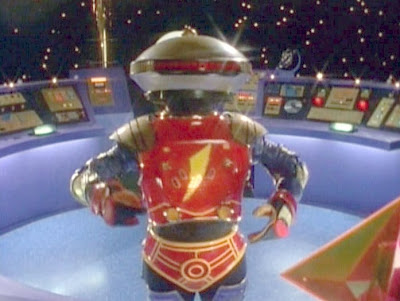 ALPHA 5
We all know this robot, everyone commonly know him as Alpha. He was played by mostly women. In order to tie in Mighty Morphin Power Rangers with Saban's Masked Rider in the 3-parter "A Friend in Need," Alpha's background was revealed to be that he was built by King Lexion of Edenoi. But this tie-in was later cut off in the Masked Rider series and never mentioned again in Power Rangers. 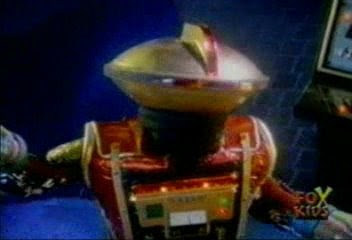 ALPHA (Original Look)
In the pilot, which didn't air on Television until 1999, revealed that Alpha had a different look before the look we all knew. He had a bigger horn on his head and more junk on the front of his torso and no 'power' lightning bolt. 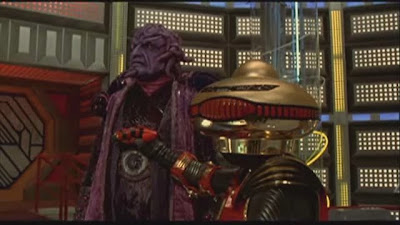 ALPHA 5 (Movie Look)
Not only did the Rangers, Lord Zedd and the Command Center get a new 'movie' look, so did Alpha 5. I liked this darker and shinier look but not so crazy about the red visor line looking like it is over-bubbling, but it was interesting. 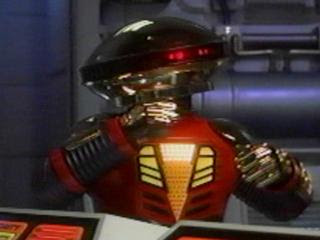 ALPHA 5 (2nd Look)
For the second movie "Turbo: A Power Rangers Movie," Alpha got a new look and this went on to the TV series without any explanation. Later when Dimitria and Alpha 6 came into the scene, Alpha 6 said he came from a long line of Alphas and no explanation on Alpha 5 being built in Edenoi. This made me believe that the Edenoi origin was stripped and now Alpha was one of many built in a place of good or whatever. Alpha 5 got his old body back when he was last seen in "Passing the Torch Part 2." 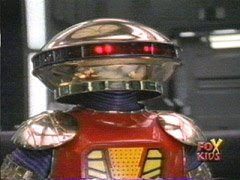 ALPHA 6
Alpha 6 first spoke like a hip-hopper or New Yorker, probably to be more 'cool' but fans just found it annoying. Alpha 6 had the same look as the new Alpha 5, it was the same suit. In Power Rangers in Space, Alpha 6's voice was changed to something more similar to Alpha 5's. He last ended up in Miranoi. In "Forever Red," there was a robot with the same look that in the script and credits was called Alpha 7. 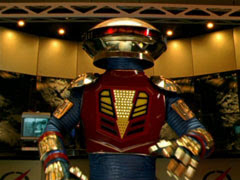 "ALPHA 6" (Operation Overdrive)
The same suit but taller actor was used. Now this robot was called "Alpha 6" but many consider him to be "Alpha 5" because Alpha 6 was in Miranoi and what would he be doing in a box in a warehouse in Angel Grove? It would make more sense that Alpha 5 was put for safe keeping there while everything was going on.
Posted by Lavender Ranger at 9:11 PM 2 comments: 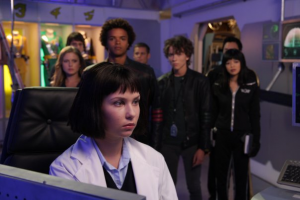 Power Rangers RPM
Everyone is asking when new episodes will air. According to spoilers, the Silver and Gold Rangers will appear in Episode 15 and Eddie Guzelian's last episode as producer is Episode 18. The colors indicate the Ranger or Rider I believe the episode will be about. These are subject to change of course!
Sat June 13 - Embodied (14)
Sat June 20 - Ghosts (15)
Sat June 27 - Rerun
Sat July 4 - In or Out (16)
Sat July 11 - Prisoners (17)
Sat July 18 - Reruns
Sat July 25 - Reruns
Sat Aug 1 - Belly of the Beast (18) 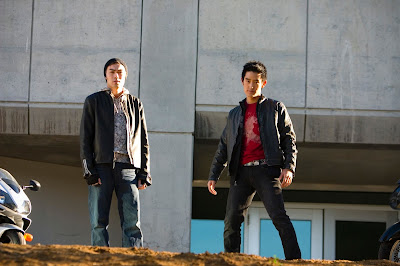 *- as of September 4th, this are all incorrect.

I don't have the titles of the rest of the episodes but I estimated that the last episode will air either on January 17 or 24th.