The following are early designs of mecha in Super Sentai from a concept art book released in 2002, so there isn't anything past Hurricanger. 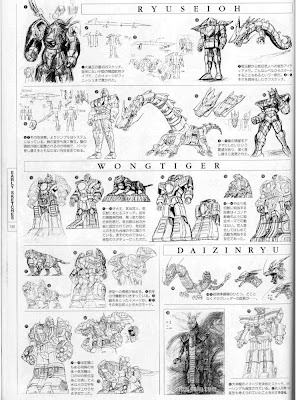 Dairanger - Ryuseioh, Wong Tiger, Daizinryu
Early designs of Ryuseioh (Red Dragon Thunder Zord), the warrior form was more boxy and had shoulder pads and the dragon form had two legs only. Also included in the scan is the final design. Wong Tiger (Tigerzord) had originally combined, using the Lion as arms. Its warrior mode was slightly different. Daizinryu (Serpentera) was to have a robot warrior mode. They were known as Thunderzords in MMPR. 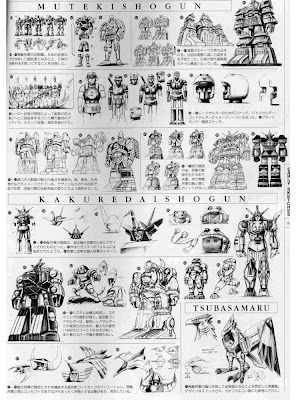 Kakuranger - Mutei Shogun, Kakure DaiShogun and Tsubasamaru
Muteki Shogun (Shogun megzord) wasn't much different, the individual mecha looked more armored. The Juuzou Fighters (Battle Borgs) looked slightly different. As for Kakure Dai Shogun (Ninja Megazord), the ape was more ape-like and the frog was fatter. They had one form of it with thicker horns (being the original crane's wings), one slim version and another boxier look. They were known as Ninja Zords in MMPR. 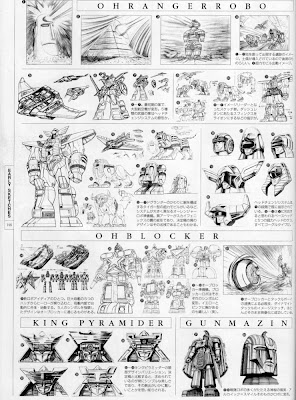 Ohranger - Ohranger Robo, OhBlocker, King Pyramider, and Gunmazin
Originally the robos of the Ohranger Robo (Zeo Megazord) were a Phoenix, Sphinx, Taurus, Tiger (yellow) and a monument (pink). The Taurus was more stream-lined. The helmets for the robo had the animal themes, Yellow looking more tiger-like. One form of Ohranger Robo was a jet. Oh Blocker (Super Zeo Megazord) came from some battle ship. And the Rangers would enter through the shapes. On the bottom of the scan different faces for King Pyramider (Pyramidas). They were known as Zeo Zords in Zeo. 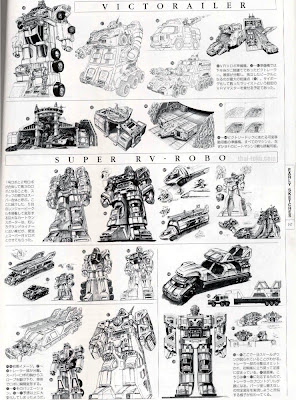 Carranger - Victorailer and Super RV Robo
The Victorailer (Artillitron) was to actually stand up, combine with the other vehicles I think, not sure. Alternative designs to the base. VRV Robo was to be called Super RV-Robo and to have a more futuristic look like trailers that carried other vehicles. Five alternative forms on the bottom of the scan. They were known as Turbo Zords in Turbo. 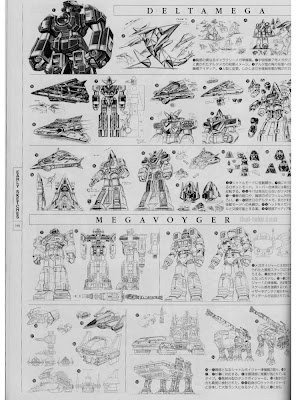 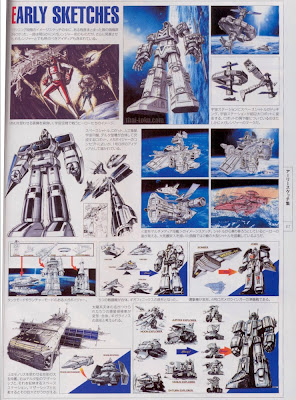 These look like more different designs for Megaranger, because the use of the word 'Mega.' Also interesting is the top left picture of Rangers in jets, meaning they did plan for them to be in space, or just to fool around with the Power Ranger guys more, into thinking the series was to be in space, to only find out it was more video game-based. 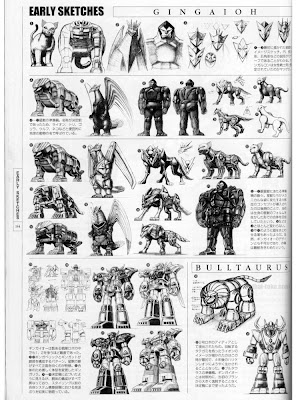 Gingaman - Gingaioh & Bull Taurus
Alternative looks for the Ginga Beasts (Galactabeasts) are interesting. The wolf looked more fetal and wild. Condor seemed to always looked the same, just different heads and wing designs. The Bulll Taurus (Toro Zord) seemed to had been a lion to begin with. Gingaoh (Galaxy Megazord) itself seemed to be bigger and longer and one version with wings poking out from the back. They were the Galactabeasts in Lost Galaxy. 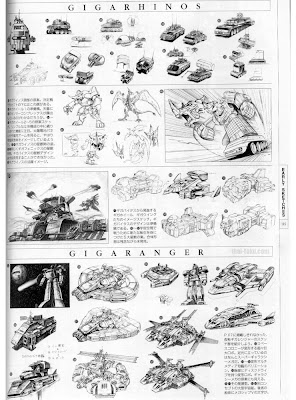 Gingaman - Giga Rhinos and GigaRanger
They were the Galactabeasts in Lost Galaxy. Giga Rhinos (Centaurus) had alterntive looks. They have some sketches of Giga Phoenix (Stratoforce) as well. Also five ships that had the heads of the Ginga Beasts (Galactabeasts)--that would have helped the Lost Galaxy look. Giga Ranger seemed to be another robo for Megaranger or maybe Megaranger was to be called Giga Ranger, it's not for sure. 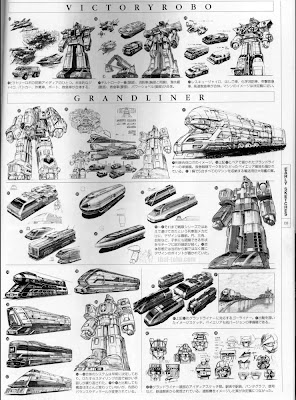 GoGoV - Victory Robo & Grand Liner
Victory Robo (Lightspeed Megazord) had alternative vehicles, some tank, jet, and crane. GrandLiner (Suepr Train) was to be a bit rounder and bulkier. Other sketches of the trains looked rather interesting and innovative. Two sketches show the trains as different shapes and forms, other than how they are now, looking the same. These were the zords used in Lightspeed Rescue. 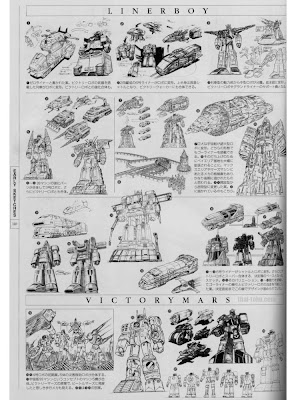 GoGoV - Liner Boy and Victory Mars
These were the zords used in Lightspeed Rescue. In GoGoV, Liner Boy worked on its own but in Power Rangers, it was Titanium Ranger's. Here are different designs and ideas, including give vehicles that fit in one shuttle, making a boxy rocket-like robo. Victory Mars was to be five different warriors and be more stream-lined. 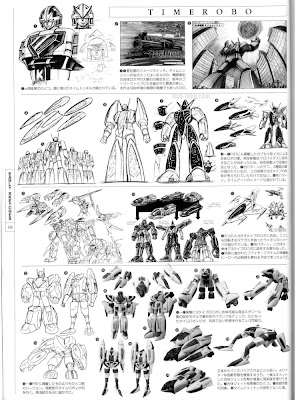 Timeranger - Time Robo
These are early sketches of what became the zords for Time Force. The jets were to be more cylindrical and phallic. On the bottom, it shows alternative forms to it just becoming two robos, it was to have a Gorilla look, a canine look and a frog-like form. One version of it was a lion and bird. 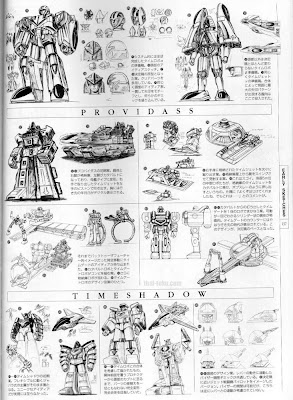 Timeranger - Time Robo, Providas and Time ShadowOn the top, it is closer to what we had for Alpha and Beta. Providas (Time Warp) had different forms, one was a shuttle base that became a robot. One was a base that was half warrior on top. If people didn't like Providas punching the jets into time, other ideas had it playing gymnastics over a ring. Time Shadow had ring-like arms. 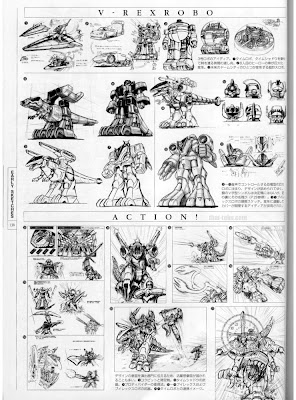 Timeranger - V-Rex Robo
V-Rex Robo was known as the Quantusaurus in Time Force. Early forms had it as a space ship, a car and a round robo. The rest is the dinosaur form and design ideas of how it would attack. 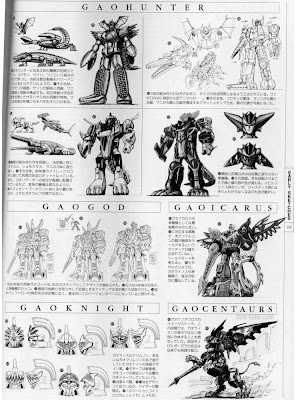 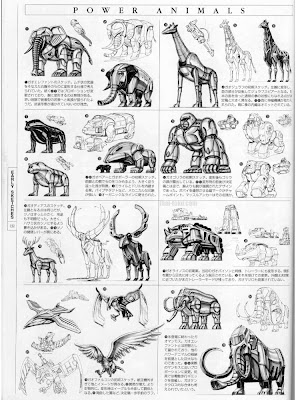 Gaoranger - Power Animals
Other alternative looks for the Power Animals (Elephant, Giraffe, Bears, Gorilla, Rhino, Deer, Falcon and Mammoth). It seems Armadillo didn't originally come with the Rhino. And yes, they planned for a Mammoth but it never happened. 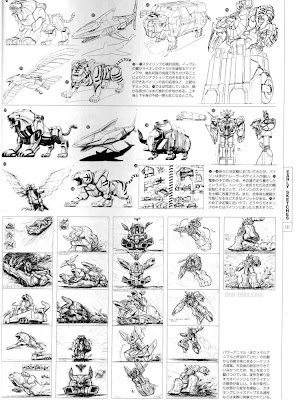 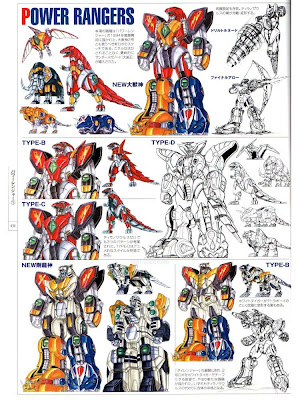 The most popular page of conversation is these concept designs Plex did. Plex is the company that designs everything for Bandai and Toei. Here we have different versions of the Dino Zords to combine with an alternative version of the White Tiger Zord, probably these were made for the second season of MMPR, instead of using the ones from Dairanger and tie in the White Ranger. Many fans tie this with Zyu 2, which is a fan nickname to the footage Toei made for MMPR.
Posted by Lavender Ranger at 5:03 PM

Great post! Really interesting images.
It's a shame there aren't higher quality scans, both so that people could really get a good look at them and so that someone could take a crack at translating to get some details on the alternate Megaranger ones (looks like I see the phrase "Gigaranger" in there, but it's pretty difficult to read) and the potential Zyu2 ones.
But yeah, really interesting stuff!

I've seen the book up close, I just couldn't afford it at the time. It was at a comic book store where the owner was a Sentai fan and someone had ordered it but I got to flip through it.

i wish these could be translated