Jungle Fury: How many Phantoms will there be?

The following is just speculation. Opinions and facts may change in a few weeks.

A few weeks ago on the show, it was revealed that there will be 8 Phantoms, many thought this was the 8 Twin Phantoms, the underlings to each General of GenJyuKen. But Monday night, it was revealed 3 are "Snapping Turtle, White Tiger, and Avalon Dragon." That will be Sanyo, Suugu, and Ron (above). They are the generals, the other two generals were Rio and Mele. There are some speculation, the Rio Gryphon suit will be used. But I think it is him, Ron's Beastman outfit. I think maybe they will be going with the animals in the motif, I guess they will not be going with the Mythical beasts because Sanyo was Basilisk and Suugu was Chimera.
According to this scan, there will be Sojo (Addanc user)--left (his head can be seen) and Dorou (Capricorn user). They are fighting the Shark Ranger. 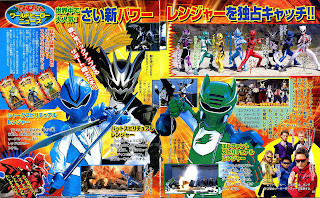 Even though they are based on mythical creatures, the GenJyuKen monsters also had an animal motif. Dorou was a Capricorn but had a goat motif and the Addanc user Sojo had a rat motif. There is Kou (Cereberus user), the Bat Ranger is fighting him. Kou was Cerberus but obviously has a dog motif.

Also on her resume, Sarah Thomson (Fran) says she will be the voice of a character named Lepus. "Lepus" is the name of a constellation of a rabbit. So, Hiso is mostly the suit that is gonna be used. She had a Rabbit motif but was a Fairy-fist user.

I think Mele's Phoenix outfit and Rio's Gryphon outfits will be used, Dai Shi and Camille will become them. So if that is 7, then the other might be Shiyuu, the Minotaur user.

Because there is an episode description "Blue Ranger, Twin Dagger" which implicates it will use the footage from the episode using Shiyuu. His motif was the Ox.


So then most likely the suit definitely not being used will be:

As for Gouyu (Catoblepas/Boar), it's hard to tell if he will be used. Even though I know there will only be 8 Phantoms, but this one is pretty important. If skipped, I guess they can work around it. But in his 'giant' footage, he is accompanied by Sanyo, well Sanyo takes him away---which could be used for the show to have more 'hype' or 'terror' over the phantoms. Also, Violet destroys Gouyu in front of the Gryphon when taking him on. So dunno, maybe they will use Gouyu and skip Haku or say she is a regular monster.

Posted by Lavender Ranger at 7:53 AM No comments: