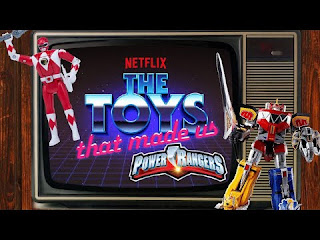 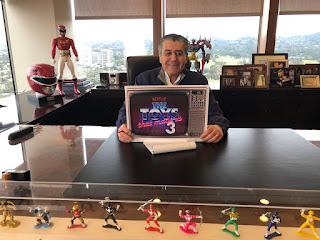 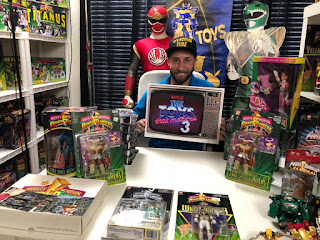 Source: https://www.cclemon99.com/2019/11/the-toys-that-made-us-mighty-morphin.html
Posted by Lavender Ranger at 12:57 PM No comments: 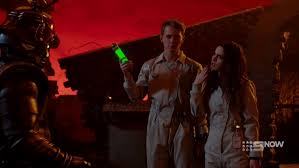 Summary:
Steel wants to own a pet. Nate says if he can take care of a potted plant for a week, then he will get a pet. Meanwhile, the villains are about to execute the plan. Vargoyle presses the button and the memory pulsator will change everyone's memories in the city.  They won't remember Evox. He will replace their memories, making them forget the evil avatars. The new memory is that Blaze and Roxy became Red and Yellow Rangers. Zoey thinks she works in the laundry and surprised she is in the lab. Steel is with his plant and calls the plant Spot. Devon is frozen and Steel is not affected. Devon doesn't remember Steel. 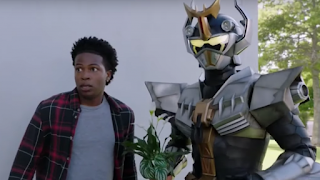 Steel convinces Devon to go with him to Grid Battleforce for the simulator. They spot Blaze and Roxy going inside. They hide behind a van. They see the other Rangers. Devon doesn't believe Steel's story. Steel realizes that must be the plan. He says bad guys always forget he is a half-human and half robot. Ben and Betty don't recognize him and think they stole the communicators. Devon gives his. They tackle Steel and he lets go his hand and the hand spanks them and plays with them. Devon and Steel run away. The hand returns. They don't have their wristcoms. Vargoyle arrives. 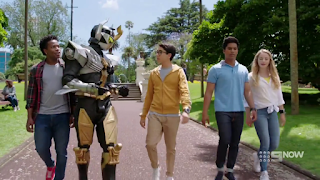 Vargoyle mentions the broadcast tower, Devon and Steel figure out where the Memory Pulsator is. Steel fights Vargoyle and fails. Devon tries helping and returns the Spot Plant. Devon fights Vargoyle. Steel puts Spot down. Vargoyle beats them up. Vargoyle notices the plant and cuts it. Devon runs fast and saves it, realizing he is the Red Ranger. Steel tells him to get the wrist coms back. Vargoyle burns the plant and Steel mourns it. Vargoyle throws Steel in the trash. Devon gets the wrist coms. Steel gets out of the trash. Devon tells him to not give up. They get the Wrist Coms and go after the pulsator.

Blaze and Roxy want the Rangers to help load the Mega Transporters. Roxy goes to her real body and puts a data chip inside the box. Ben and Betty crack a transporter and end up teleporting to a bunch of random places. Devon and Steel arrive to the pulsator. Steel tries blasting it but it is immune. Devon gets shocked trying to climb it. Steel climbs up the tower even though it shocks him. Devon is to turn off the power and runs off. Muriel's boss stops him but Devon explains and Vargoyle is after him. Devon morphs.

Vargoyle's Morph-X is low and Blaze and Roxy stop Scrozzle from transporting some. Devon fights Vargoyle. Steel gets to the pulsator and turns it off. It explodes and he falls down. The pulse stops and everyone's memories return. Devon calls Steel but he does not respond. Steel shuts down. The Rangers put the transporters in a van. They remember and battle pose. Blaze and Roxy teleport and steel the transporters. Devon continues fighting Vargoyle. He blasts him and destroys Vargoyle. Back at Grid Battleforce, the gang worries about Steel. A Gigadrone arrives and the Rangers leave in zords. Gigadrone arrives and the Beast-X Megazord is formed.

They fight. They destroy it. Steel is back to normal and is called a hero. He feels bad for his plant. Nate says because he saved the city, he can have his pet. They get him a puppy which freezes Devon since dogs make him freeze up. A girl loves the puppy and the mom says they couldn't find a puppy at the shelter. Steel offers the dog to the girl. The Rangers congrats him on his generosity. Steel says he doesn't have the time. Ben and Betty arrive from their trip, which Betty wants to do it again. Ben does not. Everyone laughs. Back with Evox, Blaze and Roxy show off the Mega Transporters and they sabotaged the stasis pod.

Review:
Nice to see Muriel's boss back to continue the continuity. This episode shows the heart of Steel and that he can have emotions not just one-liners and being a flat character. It was great to see Blaze in the Red Ranger suit though.

Grade: A-
Posted by Lavender Ranger at 12:28 PM No comments: 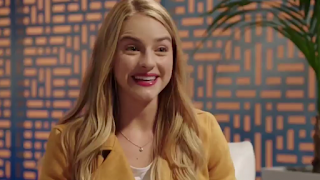