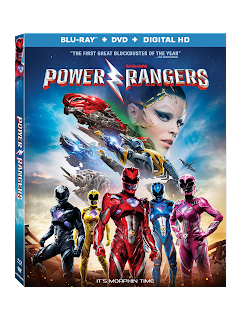 “Nostalgia has never felt so morphinomenal”
- Time Out

Five Ordinary Teens Morph Into Extraordinary Super Heroes to Save the Planet in the Action-Packed Blockbuster Arriving on Digital HD June 13
and 4K Ultra HDTM Combo Pack, Blu-rayTM Combo Pack, and DVD
on June 27 from Lionsgate

4K Ultra HD™ to include both Dolby Vision and Dolby Atmos

SANTA MONICA, CA (May 3, 2017) – The action-packed, coming of age feature film Saban’s Power Rangers will morph onto Digital HD June 13 and on 4K Ultra HD Combo Pack (plus Blu-ray and Digital HD), Blu-ray Combo Pack (plus DVD and Digital HD), DVD and On Demand June 27 from Lionsgate. As part of the 24-year-old global phenomenon and based on the five Rangers from the original TV series, “Mighty Morphin Power Rangers,”, the reimagined movie features a modern generation of Rangers including Dacre Montgomery (TV’s “Stranger Things”) as Jason the Red Ranger, Naomi Scott (The 33) as Kimberly the Pink Ranger, RJ Cyler (Me and Earl and the Dying Girl) as Billy the Blue Ranger, Ludi Lin (Monster Hunt) as Zack the Black Ranger, and Becky G. (Neighbors 2: Sorority Rising) as Trini the Yellow Ranger, as they attempt to stop the evil and unpredictable Rita Repulsa (played by Elizabeth Banks, The Hunger Games Franchise) from destroying their city…and ultimately the world. Bryan Cranston (“Breaking Bad”) as Zordon, and Bill Hader (Finding Dory) as Alpha 5 train the Rangers to morph and master their powers as a united team.

The epic adventure, Saban’s Power Rangers follows five ordinary high school kids who must become something extraordinary when they learn that their small town of Angel Grove – and the world – is on the verge of being obliterated by an alien threat.  Chosen by destiny, the unlikely group of teenage heroes are the only ones who can save the planet but first, they have to band together in order to harness their super powers and become Power Rangers.

The Saban’s Power Rangers 4K Ultra HD, Blu-ray and Digital HD releases feature never-before-heard audio commentary with director Dean Israelite and writer John Gatins, as well as a nine-part documentary featuring commentary from the actors and filmmakers including Power Rangers Creator, Haim Saban which looks behind the scenes of the film at the casting, training, special effects, and creation of Saban’s Power Rangers, with deleted/alternate/extended scenes and outtakes. The 4K Ultra HD Blu-ray will also feature Dolby Vision™ high-dynamic range (HDR), making it the first title from Lionsgate to feature both Dolby Vision and Dolby Atmos®. Dolby Vision transforms the TV experience in the home by delivering greater brightness and contrast, as well as a fuller palette of rich colors. Together with the captivating sound of Dolby Atmos, consumers will experience both cutting-edge imaging and state-of-the-art sound technology for a fully immersive entertainment experience.

ABOUT DOLBY ATMOS
Dolby Atmos delivers moving audio — sound that can be precisely placed and moved anywhere in three-dimensional space, including overhead. It brings entertainment alive all around the audience in a powerfully immersive and emotive experience. To learn more about Dolby Atmos, visit dolby.com/Atmos.

Lionsgate's home entertainment business is an industry leader in box office-to-DVD and box office-to-VOD revenue conversion rates. Lionsgate handles a prestigious and prolific library of more than 16,000 motion picture and television titles that is an important source of recurring revenue and serves as a foundation for the growth of the Company's core businesses. The Lionsgate, Summit Entertainment and Starz brands are synonymous with original, daring, quality entertainment in markets around the world. www.lionsgate.com

ABOUT SABAN’S POWER RANGERS
Saban’s Power Rangers franchise is the brainchild of Haim Saban, creator and producer of the original “Mighty Morphin Power Rangers” hit series that launched in 1993. Following its introduction, “Power Rangers” quickly became the most-watched children’s television program in the United States and remains one of the top-rated and longest running kids live-action series in television history. The series follows the adventures of a group of ordinary teens who morph into superheroes and save the world from evil. It is seen in more than 150 markets, translated into numerous languages and a favorite on many key international children’s programming blocks around the world. For more information, visit www.powerrangers.com. 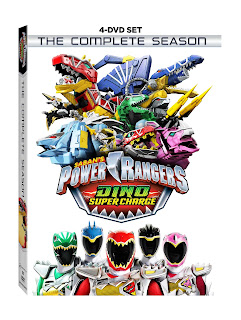 PROGRAM DESCRIPTION
Catch all of the dino-charged adventures when Nickelodeon’s iconic, 23-years-running “Power Rangers” TV series returns with Power Rangers Dino Super Charge: The Complete Season, arriving on DVD and Digital HD on June 27 from Lionsgate. The Power Rangers must battle an evil intergalactic villain in this action-packed franchise that remains one of the top-rated and longest-running children’s live-action series in TV history. Including four discs with over four hours of action, the Power Rangers Dino Super Charge: The Complete Season DVD will be available for the suggested retail price of $19.98.

OFFICIAL SYNOPSIS
The Power Rangers continue their search for the Energems after Sledge’s defeat, but soon learn that his most dangerous prisoner, the evil Heckyl, survived! In light of this new threat, Kendall creates a powerful new Dino Charger that unlocks the Red Ranger’s T-Rex Super Charge mode! It will take every Zord, Megazord, and Dino Charger in the Power Rangers’ arsenal to finally unite all ten Energems and save the universe!