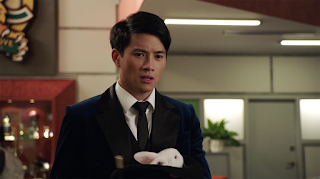 Summary:
Preston does another magic show in the school common area, the Rangers applaud it. Victor takes out a rabbit out of his hat. Some people boo him. Preston is sad. Back on Galvanax's ship, Galvanax judges cards of monsters. Ripcon shows Galvanax's championship belt, saying he is a heavyweight. He wants to take on the Red Ranger. Brody tells Preston to not give up. Preston shows a bracelet his dad gave him. The rabbit appears again. More rabbits come out, he doesn't know where they come from. Brody says the Ninja Steel has to do with this and talk to Mick. Preston comes into the wreck yard when they see they fixed Brody's dad's truck. Hayley's shake falls on Calvin and Preston freezes the drink. Calvin doubts and Preston drops it on him. 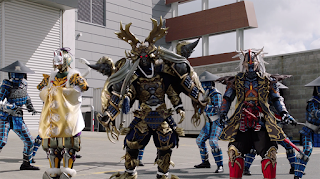 Mick asks Preston if this started recently. Mick says it is him because he has a great love of magic, the ninja steel can magnify his truest desires. He has to be careful with it. Brody leaves the bunnies when he sees the buzz cams and calls the others. Brody faces Galvanax and his henchmen. Brody clarifies Galavanax that he made him lose his dad and kept him prisoner. The others arrive and the guys are kind of fearful of Galvanaz. Pink and White egg him on. Pink calls her a chump. Everyone on the ship watches. Galvanaz sends Slogre. The Rangers morph and fight the baddies. Slogre releases fog that makes the Rangers feel strange. Blue uses magic on the baddie and he retreats. Slogre says his mist will slow them down. 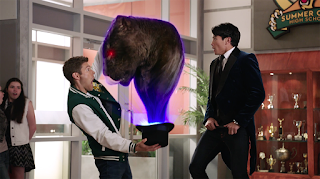 Preston does another show. Hayley, Calvin and Sarah are all down and leave. Preston performs magic with Victor, revealing a panther instead of a cat. Victor sits down. Preston asks for another volunteer. Monty comes. Calvin and the others are slow and talking slow. Slogre arrives. Preston split Monty apart with a magic box. Monty's legs run away. Brody gets a call and gets Preston. The three try morphing and Slogre takes their stars. Galvanax is happy. Brody and Preston arrive. Brody tells Preston to use his magic. Preston is hesitant but performs magic on Slogre and Brody gives the stars back. Preston asks why it doesn't always work. Brody says it could be he doesn't use them for personal gain. Only works when he is helping others. The two morph. They fight Slogre elsewhere as he gets away. They do a dual attack. 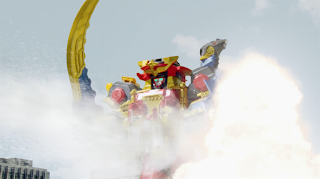 The trio comes back to normal. Cosmo Royale asks if Slogre should get another chance and they say yes and he becomes big. The Rangers calls the zords. They put their Master Mode armor and fight the monster. Slogre flies. Robo red comes loose and fights. Preston goes in the Dragon Zord and flies and captures Robo Red. Red says the Megazord should have wings. Preston tries Dragon formation and the cockpit changes. Ninja Steel Megazord Dragon Formation is made and fights the flying monster. They destroy the monster. Back at school, Preston puts Monty back together. He gets out and he is squared like Minecraft, he says he likes it. Preston apologizes, he is forgiven. They blindfold Brody and surprise him with the truck. He loves it of course. 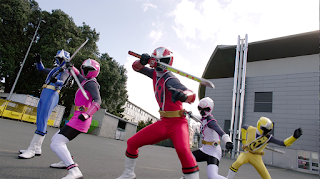 Review:
It was a good episode but very similar to the last one. A character has good intentions but does a misstep and learns a lesson. We see Calvin and Hayley still holding hands but nothing more. We see more interesting American footage mixed in with Japanese footage, pretty much the same ratio as Dino Charge, but not as much as Samurai and Megaforce.
﻿
Posted by Lavender Ranger at 8:30 PM No comments: