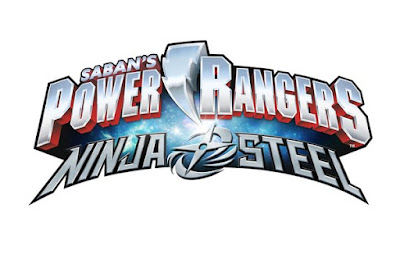 Saban Brands sent Power Force this logo by the way.

Posted by Lavender Ranger at 9:53 PM No comments:

Finally since being spotted by fans in Febraury, ZyuOh the World has arrived. Originally I thought it was orange but his suit is gold, silver and black. 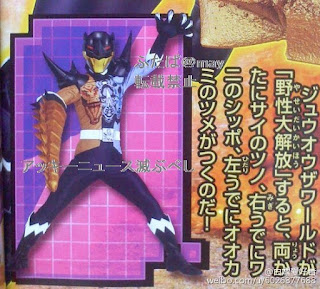 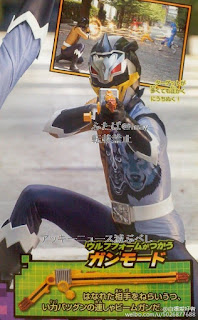 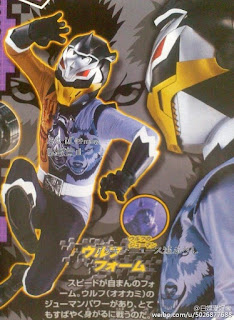 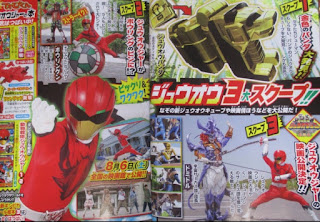 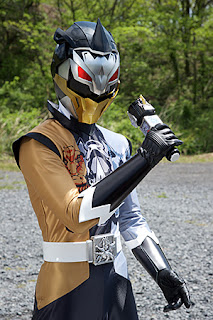 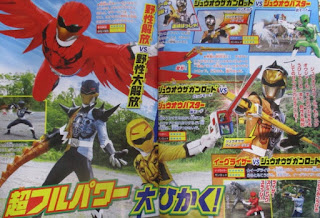 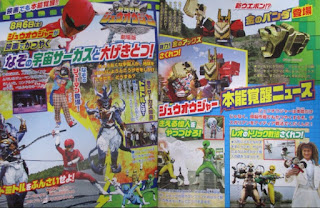 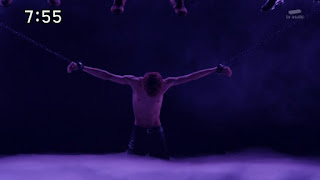 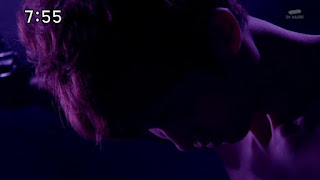 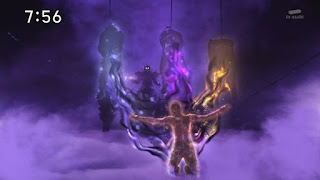 http://henshingrid.blogspot.com/2016/02/zyuohger-6th-member-and-more-cubes.html
Posted by Lavender Ranger at 7:31 PM No comments: 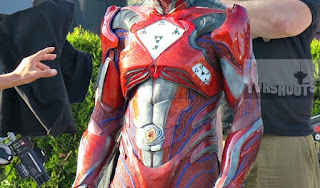 Primary shooting with the main cast has ended but they are still shooting. Here is a stuntman in the Red Ranger costume and men in green suits representing the Putty Patrol. 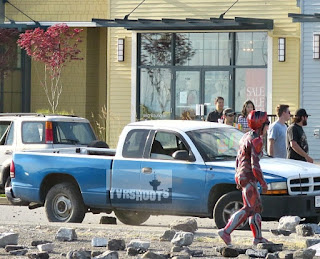 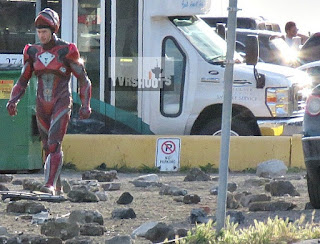 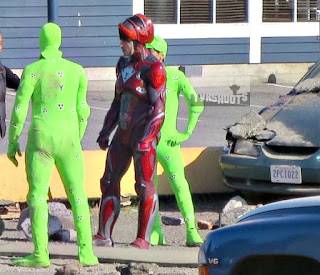 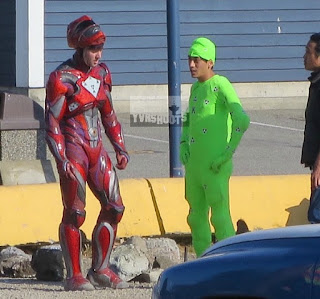 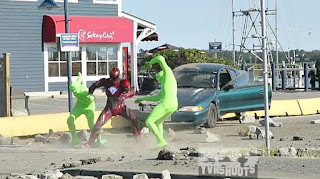 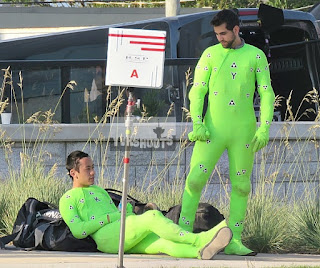 Related: http://yvrshoots.com/2016/05/shoot-power-rangers-red-ranger-in-action-in-steveston.html#.V0ootPkrLIU
Posted by Lavender Ranger at 7:28 PM No comments: 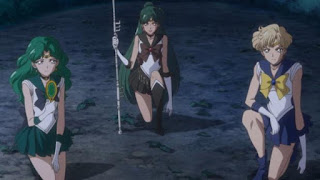 The three guardians gather, Chibi-Moon and Pluto hug. Pluto explains that she was reincarnated thanks to Neo Queen Serenity. Sailor Moon changes to Neo Queen Serenity. Chibi-Moon feels Pluto has changed to be stronger. The three Guardians kneel in front of Usagi and introduce themselves. Uranus and Neptune apologize for being rude but they swear it was to protect the universe and her. Neptune explains they have battled invaders from distant galaxies and watch over Silver Millennium from the far distance. Pluto explains they were reborn like them and awakened anew on Earth. Neptune says they might be too late as the enemies have already come. They overlooked it. Venus asks who Death  Busters are, they explain they are from the Tau Star System. 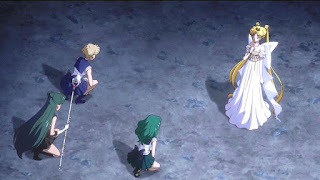 Pluto's orb glows. She says the aliens were attracted by the area they now inhabit. A warp has occurred in the space-time whether by accident or design. Uranus and Neptune say they can't disguise as students anymore. They apologize for getting the Inner Senshi involved, Usagi says it is fine. They want to help but the Outers say they will do it by themselves. Uranus says they are in the way. Usagi wants to help. Uranus says they will be in danger. The Outers monitor the enemy and swear not to fail. Uranus touches Usagi's head and tells her she didn't mean to confuse her. Neptune says Uranus is both female and male (which I doubt, the character has always been physically female). Tuxedo Kamen asks if their 'stronger items' are the three Talismans that will bring destruction. They explain they have to use the Talismans to bury the Deity of Destruction. 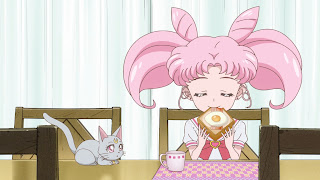 Usagi wakes up late the next day as Chibi-Usa eats breakfast and hears about the Mugen Academy being closed and showing Hotaru's dad. Usahi's dad says he was famous long ago. In the base, they found info on Dr. Tomoe, who bought the Mugen District. Luna wants Chibi-Usa to keep an eye on Hotaru. Ami says Tomoe is suspicious too. Usagi asks Chibi-Usa if she will do it, she agrees. Meanwhile, Tomoe tells Kaori to concentrate on eliminating the Senshi. Kaori/Kalonite goes to the master and he says they must gather the powers of the Senshi. She holds a crystal in her pool and various lights (of the Senshi) gather around it. The Outers are the strongest ones. She calls Cyprine, the last one of the Witches 5. Later, Chibi-Usa will go out with Hotaru. Usagi's dad spots the Holy Grail that Usagi and Mamoru made for Chibi-Usa. Elsewhere, Hotaru is being operated on. Chibi-Usa waits at the movies but Hotaru is late and she calls her. Chibi-Usa worries for her and runs to her house. 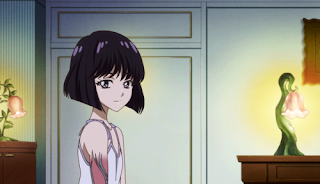 Hotaru has been given new body parts that are cybernetic. Professor thinks there will be no accidents. Hotaru worries about Chibi-Usa, who stumbles in and sees her and freaks out and leaves. Hotaru remembers the fire she was in and her mom dying and waking up to new robotic limbs. She says she didn't want anyone to know the secrets of her body. She thinks back to Chibi-Usa offering her the Holy Grail and them pinky-swearing. Hotaru cries. She sees shadows of the Outer Senshi. She throws her crystal at them and they disappear. She has pain from her forehead like something is trying to emerge. Chibi-Usa stops running and wonders what she should do. She feels like she hurt Hotaru. It starts running hailstones that take energy, she falls down, her crystal glows. She meets up with Usagi and Mamoru. The other people are turned to zombies. Uranus sees Cyprine who targets her. Uranus transforms. Neptune and Pluto join in. The Inner Senshi notice this in their base. 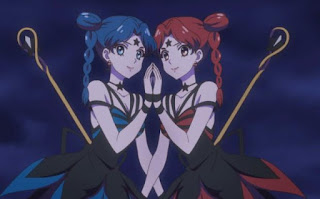 Usagi enters and tells them they must go. Cyprine attacks and the Outers go down. Mars does Mars Snake Fire. The Inners arrive. Uranus tells them to go back. The Senshi get tied up by Cyprine. Cyprine turns them evil and they fight, except for Usagi. Usagi tries to stop them. The Inner Senshi do their Season 2 Attacks (Venus Love Me Chain, Burning Mandala, etc.). Sailor Moon does her Moon Spiral Heart Attack on Cyprine. Cyprine splits into two, the other one is Pitol. Tuxedo and Chibi-Moon arrive. Pink Sugar Heart Attack doesn't work, Jupiter attacks but Tuxedo blocks the attack. Moon says the Outers saved them and look after them. Tuxedo and Chibi-Usa hold hands with Moon and they combine their hearts and the Holy Grail appears.

Episode Review:
This episode will pretty much exposition and a pre-cursor to the next episode. Also, Naoko originally wanted Hotaru to be a cyborg but her narrator was against it.  I read the manga and that cybernetic and doll stuff was in there. A bit of the flashback was removed from the original manga and moved to Act 33 of Sailor Moon Crystal. 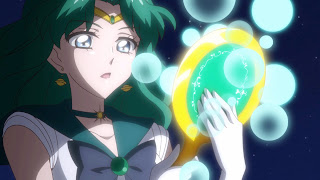 The Holy Grail is made from Tuxedo Kamen, Chibi-Usa and Sailor Moon while the Senshi fight each other because of Cyprine and Pitol. (The whole end section for the last episode is repeated here) A wave goes by and all the Senshi are good again and stop. Moon asks them to share their hearts. The Tailsmans glow and bubbles come out of them. The Senshi glow and they send their energy up and makes a rainbow and glowing balls of lights. The Holy Grail opens and the lights go in. Moon pours it and says "Moon Crisis Make Up!" She becomes Super Sailor Moon. The Senshi's brooches become heart-shapes. Chibi-Usa remembers her mom telling her about Super Sailor Moon. Kaolinite and Professor Tomoe can't believe this. Meanwhile Hotaru doesn't want something to come out. Pharaoh 90 feels the energy, saying her power exceeds the power of their crystal. Hotaru hyperventilates and changes into another person saying it is the Legendary Crystal's power she wants. 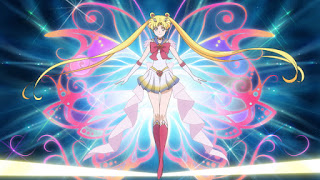 Super Sailor Moon says she won't hesitate again and does her new Rainbow Moon Heartache and destroys both Cyprine and Pitol. The crystal falls and cracks. Kaolinite is mad and throws her cane. She wants to be the master's partner. The being possessing Hotaru sees Kaolinite through the crystal and mocks her. Hotaru returns to normal and faints. Super Sailor Moon stops glowing and says the power was from everyone. The Outers are shocked the Tailsmans gave her power. Neptune says it is the first time her mirror resonated like that. Usagi thanks them for lending her their power. Usagi says they are all friends. Neptune thinks that even that much they resist, their talismans gave in so easily and maybe they should tell Sailor Moon the truth. They all fly into Uranus' apartment which has been ruined by Cyprine's attack. Uranus says she won't have enough money to repair, the place is one million yen a month, they have patrons. 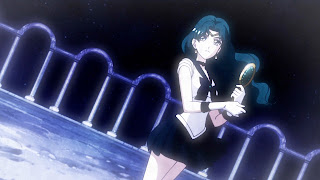 Neptune says the only time the three Talismans have activated was when the Silver Millennium went into ruin. Back then, when the Inner Senshi died, the Outers weren't allowed to leave their guarding territories at the time. Mamoru comforts Usagi as she doesn't want to hear it and cries. The Talismans glowed and the three went sent to the castle. They joined the tailsmans and summoned the Last Guardians who should never have been awakened. We see Sailor Saturn in the flashback. The trio learn the end had to come. She swung down her Silence Glaive and destroyed everything. Neptune says the tailsmans are meant to wake up Saturn. They must not do so because then the world will end. Mars now realizes what the premonition meant. They say they were never meant to meet but they were reborn as humans on Earth. 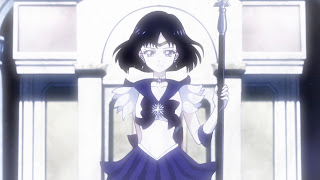 Michiru shows them Hotaru. They are shocked. Chibi-Usa especially. Tuxedo asks if Saturn's spirit has been calling the tailsmans. Neptune says the time of her awakening is approaching. Pluto says they know the future exists. Uranus says they can't let be awake and kill Hotaru. The other Senshi of course object. Mercury says the Tailsmans might not wake her, Uranus says that the tailsmans' energies are full so they will. Usagi says there has to be another way. Uranus says Hotaru's body won't last long anyway and asks Chibi-Usa if she has seen her body. They explain her body is a shell like a doll after the accident thanks to her father Professor Tomoe. Chibi-Usa asks if she can be saved. Uranus admits the only way to heal her is for her to awaken as Sailor Saturn but that will destroy the world. Moon says they shouldn't kill Saturn because the future exists and they all survive. 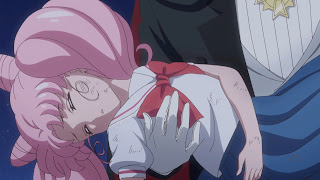 Pluto says she knew Moon would be against it. They turn away and say they can't be friends and won't fall in line. They don't mind if they think them as their enemies but they will destroy the Death Busters and go away. Chibi-Usa wonders if Hotaru will bring them their destruction. Chibi-Moon runs off and jumps buildings to Hotaru's house thinking she must save them. The Outers are stake-outing the house. Hotaru has fainted and Chibi-Moon goes to her. Hotaru's eyes glow, the glass shatters, wind blows. Kaori and Tomoe feel it. Hotaru's hair grows and she becomes taller and her hair grabs Chibi-Moon. Tuxedo Kamen tries to go to save her but is knocked away from the new Hotaru. Moon arrives. Chibi-Moon's energy is taken and she faints. The cats watch this from the base. Hotaru blows wind, the three float in a rainbow orb. The Inners arrive. Hotaru now has the crystal. Uranus notices the Tailsmans aren't glowing. Hotaru says she is Mistress 9, holding the future crystal. The Senshi all watch. Chibi-Usa is not breathing. 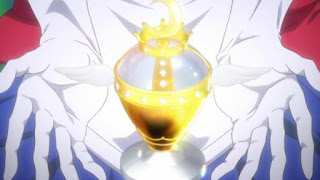 Review:
This was a great episode. I love the backstory. Yet another exposition but this time it was in between the action which was a better place for it. Also the pathos and moments are really played well here, especially the reveal of Mistress 9. It wasn't a surprise as I already know the story but you get involved in the story, that it plays out well. I read the manga today and a bit of the flashback here was taken from the manga Act 32.
Posted by Lavender Ranger at 7:25 PM No comments: