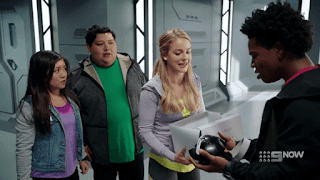 At Riptide, Devon fights a blindfolded Ravi and Zoey. They finish and Betty and Ben come with a reality headset. They get called about Blaze. Devon tells Betty and Ben for nothing to happen to it. Betty uses it and she is surfing in the game but knocking everything out in the actual place. She falls but she says she is fine. A shark comes up to her and she and Ben fall and breaks the headset. Gold and Silver fight Tronics. The others arrive and Blaze is about to make a Robotron when Devon slices the laptop in half Blaze leaves. The Rangers clean up the Tronics. 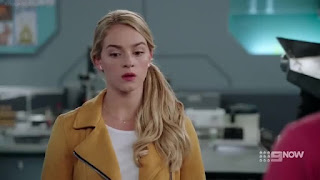 Back at base, Devon tells the commander. Betty and Ben show Zoey the broken headset. She tells them he will be less mad if she says she did it. Betty is against it. Zoey takes the blame. Ben and Betty lie. Zoey takes Devon. Evox is mad at Blaze. Blaze leaves and Roxy plots. Scrozzle fixes the Robotron Maker. Roxy asks if his computer and break things apart. Her plan is to break the weapons of the Rangers. Nathan makes a Gigadrone detector. Zoey says she hated the gigadrone that came from under the one. Devon enlists Ben and Betty's help set up the detectors. Each Ranger takes one as well. Roxy spots Ben and Betty. She opens a truck cargo bay and gets a wrench. She makes a Robotron out of the wrench. He 'undos' a bike. She puts a chip on him and spots Zoey. Tooltron is tasked to take apart Zoey's wrist communicator and he takes apart the Gigadrone detector. Roxy leaves. Back at base, Commander tells Nate to activate them. He says Ben and Betty's unt isn't working. They access the camera and see it is apart. Zoey, Ben, and Betty came with ice cream. Ravi thinks he didn't do it. They show it is in pieces. 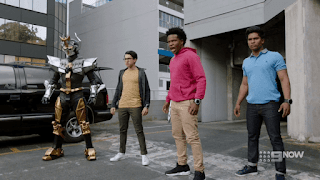 Devon figures Ben and Betty broke his headset. Zoey admits she covered for them. Devon says why should he believe Zoey. Zoey pulls the friend card and Devon talks about honesty. Zoey leaves. Jax follows Zoey. He says he believes her but Devon had a point. Zoey says she needs space. The boys fix the broken detector and it is linked. Roxy and Toolreon appear. The boy Rangers morph. The weapons are taken apart. Tooltron wants to take about Steel. Blue hands Steel a hubcap and the ray destroys the detector again. Roxy fights the four while Tooltron runs to het Silver. Red speed runs on Roxy. Blue uses his beast power but Roxy leaves. Zoey's morpher is taken apart and Tronics are sent after her. Tooltron collects her jackrabbit power on the chip. The other Rangers and Cruise arrive.  Cruise gives her her morpher and the blasters. They destroy the evil blaster and the tronics.

Zoey morphs and the Rangers fight Tooltron and the Tronics. Red and Gold destroy Tooltron. The Rangers head back to base when Scrozzle returns and gets the chip. He scolds Roxy for leaving the data chip behind. He makes a delta gigadrone and the detectors go off. All zords are deployed. Wrecker Zord goes into battle mode Beast X Megazord is formed. Gigadrone arrives and another comes out of him. It is a new Gigadrone. The two Megazords fight them. They destroy the Gigadrones. Devon apologizes and gives a carrot smoothie toe Zoey. She apologizes as well for being dishonest. They agree to be friends forever. Ben and Betty give him his new headset. Betty tells him about the shark. The shark comes and he freaks out and slips on a familiar skateboard (Chase's with the Kiwi on it) and Ben catches the headset.

Episode Review:
A solid episode, the plot made sense and all the characters came together. The Ben and Betty plot was not forced in and meant more to the A plot. I did notice that there was very little Blaze in this episode.

Posted by Lavender Ranger at 12:45 PM No comments: 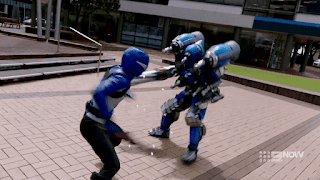 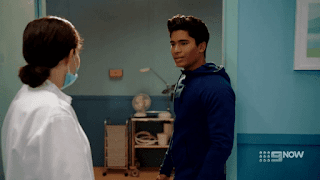 Posted by Lavender Ranger at 6:53 PM No comments: