Netflix: Global this time so no international spoilers

Villains: Lord Zedd and a new family of monsters

Drawings by Leanne Hannah, don't know if she designed them or a team.

Sounds great about the battles being new footage and new suits. The using of zord footage sounds a bit confusing. If it is indeed 22-minute 10 episodes, it might not be all the zords of Kyuranger. And if they go by the Ranger colors, then orange, yellow and silver zords of Kyuranger would be considered auxiliary or extra zords. I doubt there will be extra rangers. If it is indeed 10 episodes, they might skip the purple dragon, and red phoenix. Maybe only the Orion megazord. Speculations are abound. They might skip zords like Megaforce did with Goseiger.

Posted by Lavender Ranger at 7:40 PM No comments: 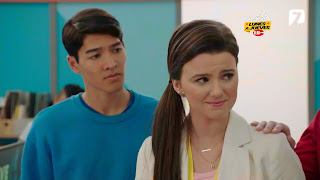 Izzy and Fern and Stan and Annie play a game at BuzzBlast that is Valentine's Day themed. Stan and Jane lose. Izzy and Fern are the winners. Ollie walks in with flowers. Fern comments on the flowers. Ollie lies and Amelia makes fun of him. He gets touchy and leaves, dumping the flowers. Lord Zedd returns to Void Queen and Void King. Sizzuari and Scrozzle came in. Void King says Scrozzle can use old robot blueprints. Lord Zedd says he has a score to settle. Back at the base, Amelia was researching on Raftkon but in reality, she was looking up a cafe that Ollie mentioned. Izzy asked and she says she will handle it. Amelia thanks Izzy. Ollie teleports in and Amelia teleports out. Izzy says maybe Amelia wanted to be her valentine. Ollie tells Izzy that the flowers were for Amelia. Izzy tells him to tell the truth but he says it is too late. He teleports away. 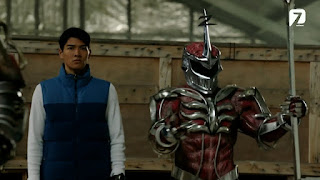 Sizzuari arrives and fights Ollie. He slashes Ollie and he glows blue. Lord Zedd arrives and Ollie obeys him. J-Borg finds Ollie's card for Amelia. Amelia opens it and finds out it is from Ollie. Amelia confronts Ollie at the base but he turns her down. He teleports away. Solon and Amelia talk and they get a call about Lord Zedd. The Rangers arrive at the warehouse with mind-controlled Ollie. Scrozzle calls a new Boomblaster, like Boomtower. Lord Zedd and Scrozzle teleport away. Ollie morphs. The Rangers morph. The group fights. Pink uses Hyper Key. Red uses the Dino Knight Key. Blue uses the Smash Dino Key and fights Aiyon. Black uses the Snooze Key. He makes Blue go to sleep. 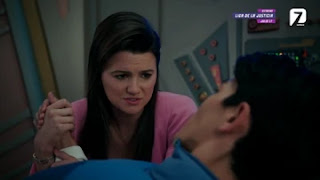 Solon works on Ollie in the base. Pink and Red fight Void King, Sizzuari, and Boomblaster. Sizzuari becomes huge and the zords are called. Pink stays with Void King and Boomblaster. The Megazord fights Sizzuari. Pink dons a key sleeve and fights Void King. He kicks her butt. Boomblaster teleports away for Zedd. Void King leaves and Amelia joins Zayto. Aiyon uses Ptera Freeze Megazord and goes with the other Rangers. They attack the monster and he freezes. They call the Mega Fury Saber and destroy Sizzuari... Or they thought. He survives and teleports away. Back at the base, Mucus fans Void Queen. Void King enters. They wonder where Lord Zedd is. Void Queen breaks the fan. Back at the base, Solon says Ollie is back to normal but needs a jolt to wake up. Izzy convinces them to get buckets of water. Amelia sits next to him. Amelia tells Ollie she really likes him. He wakes up. They almost kiss when the others arrive. Ollie asks if they defeated Lord Zedd. He says he knows his plan. Zayto sees it--with two parts of Raftkon message. Scrozzle uses it. The planet survived and they have coordinates.
Episode Review:
This is one of the better episodes. It has heart and it is smart. Only problem is too many villains to keep track of. But that comes par the course with Lord Zedd.

Posted by Lavender Ranger at 2:47 PM No comments: 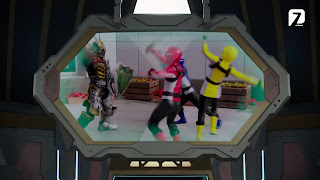 Amelia interviews her grandfather in front of Area 62 for BuzzBlast, who used to work as a janitor. He says he didn't see any aliens. He says once late at night he saw a ghost, but it was a scientist. He runs off into the forest because of a phone alert and falls in a blueberry bush. They hear about Bigfoot and run off to show her boss Jane. Amelia shows her co-workers photos and files she has. She gets a call from Solon and leaves. The two co-workers head to DInohenge. The Rangers expect a call from Commander Shaw of Battlegrid, many villains have escaped. The Beast Morpher Rangers fight a monster. The DIno Fury Rangers hear of an attack and go to the new monster. 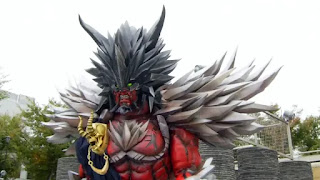 Amelia figures out the monster is the 'Bigfoot' from the video. The six morph. The monster beats down Izzy and Ollie. The Rangers continue to fight. Red uses the Blazing Dino Key and his attack is stopped by the monster. Gold uses the Electro Dino Key and his attack goes down. Amelia asks Ollie for ideas. Ollie has nothing. Red unleashes his Red armor and is knocked back. Lothorn, is the nephew of Lokar, he is not a Sporix Beast. He is insulted and leaves. The Rangers return to base. Solon scans the city. Javi says Coral Harbor is close but there is no way he came from there. The co-workers come to Dino Henge and find Lothorn. Lothorn starts attacking Dino Henge. Annie calls the Ranger Hotline. They see what is happening to the statues. Stan and Annie want selfies with Pink but she teleports them away. The Rangers protect the statues from a blast. 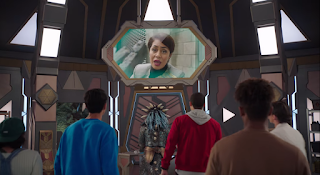 They teleport Lothorn away and fight him in the city. Black calls his shield key. Lothorn goes big and the zords are called. Lothorn does a huge light show. Mosa Razor kicks him. They combine their zords to make Primal Ultrazord. They fly in the air and attack the monster. Lothorn says he can see Angel Grove from space. They conduct Final Ultra Blast and destroy it. On BuzzBlast, Jane does a cooking segment with PopPop and blueberries.Stan and Annie were excited about a Blue Ranger---instead of Pink. Amelia apologizes. Then with he Rangers, she shows them her folder with her mom and dad. They were supposedly lost in a fire. Zayto apologizes. Aiyon and Javi says they will help solve the mystery. She cries and hugs them. They get a call from Solon. They go back and talk to General Shepard, Scrozzle is the only one that escaped. The plan was to send Lothorn after them and Lord Zedd was the one behind it all. 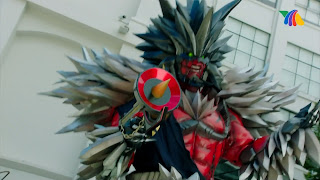 Episode Review:
Interesting to link Lothor to this unrelated monster as it is supposed to look like Satan and since Lokar was DaiSatan... then it is logical they would look alike. A pretty basic episode, as it leads to a bigger arc.
Posted by Lavender Ranger at 2:24 PM No comments: