Thanks to Davi Santos for making this interview possible, he contacted Ryan Carter (who portrays Heckyl on Power Rangers Dino Supercharge) for me for this interview. He was born in New Zealand (lived there for 19 years) and currently lives in Australia. I accidentally spelled Heckyl as "Jeckyl", he said, "Haha, I can't tell if your typo of "Jeckyl" is a typo or a comment on the character, but either way, Jeckyll and Hyde is a definite inspiration for the characters!" And as with the last interview, I had my grandnephew Jaiden ask questions as well!

Lavender Ranger: How did you hear about the role of Heckyl for Power Rangers Dino Charge?
Ryan: It was pretty run of the mill for me hearing about the role. I basically got an email from my agent asking if I would self tape for the character and I was like "hell yea!"

Lavender Ranger: How was the casting process? You told to prepare?
Ryan: It started with a self tape which I filmed while I was living in Australia, then the callback occurred in New Zealand. It was basically a couple hours of script readings, receiving direction from the casting directors and producers as well as doing some (pretty terrible) high kicks to show I have at least some form of co-ordination. Then they did make-up tests yada yada yada. I did meet Davi and James at my audition though, which was lovely. Davi seemed to know more about my character then I did.

Lavender Ranger: I heard there is a story of Heckyl's goggles?
Ryan: There are many! I don't know which one you are referring to, but on the first day of filming I didn't notice I wasn't wearing them until after a few takes in...which is bad. Luckily Chip was there and he added in some genius extra lines to make me randomly whipping out my goggles make perfect sense. 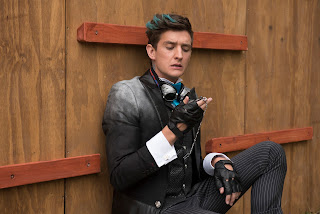 Lavender Ranger: The scene I referred to was Chip remembering the forgotten goggles. These goggles resemble the goggles of a villain from another Japanese series unrelated to the dinosaur one called Go-Busters. Go-Busters was skipped in favor for where the Dino Charge footage comes from. What other goggle stories are there?
Ryan: As far as the goggles go I think the idea for them just came from the costume designer, Sarah, and it's mainly a coincidence that they are similar to the Go Busters character. Haha the other goggle stories are far less interesting then the first, they mainly involve me having to quickly put on the goggles and accidentally slapping myself in the face, poking my eye or the goggles being so askew that Heckyl looked drunk.

Lavender Ranger: In "Forgive and Forget," we discover Heckyl has revealed his true name to the Rangers, why do you think didn't give him a fake name?
Ryan: As much as Heckyl is very cunning, I think he is also a bit cocky. He is very confident and has total faith in his plan and doesn't think the rangers are very smart, so spending time on a fake name and a disguise when they don't know who he is to begin with, would be a waste of time (and a little cliche and tacky in his opinion).

Lavender Ranger: How different is it interacting with costumed characters in Sledge's ship and normally dressed characters?
Ryan: Well I spent most of my time talking with stunt actors in suits. All the lead stunt actors were Japanese and they were some of the most amazing, talented, hard working people I've ever met and acting with them was a ball. They used their skills to make those massive plastic suits into real characters, which made my job a lot easier. Of course acting with the rangers was great as well, they're also very talented at what they do. 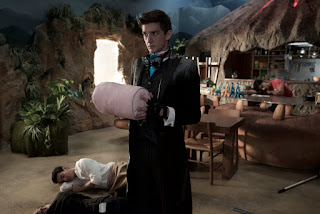 Lavender Ranger: Speaking of stunts, did you get to do any stunts?

Ryan: The stunts were almost entirely done by the pros, but I was lucky enough to do a few fight scenes and some minimal stuff at the head and tail end of the stunts (aka I pretend to get blasted, Aki the stunt guy does 4 flips through the air, then I fall 3 feet to the floor).

Lavender Ranger: You have done stage work before, what was your favorite production?

Ryan: Ummm, that's a tie between two productions. One when I was younger and acting in New Zealand in a show called Exchange where I got to play a collection of completely insane characters ranging from a 13 year old bratty German kid to a wannabe american cowboy. The other was Rausch, just before I did rangers. It was a small show with a short run but the material, the cast, crew and director were all fantastic. 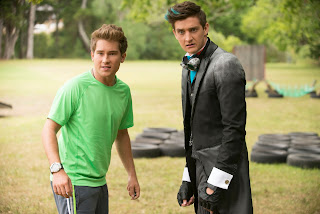 Lavender Ranger: How did stage prepare you for Power Rangers?
Ryan: I think for a character like Heckyl theatrical training comes in handy. Chip wanted a big, expressive personality and all the stage work I had done helped me to be comfortable in that "bigness".

Lavender Ranger: Have you ever watched Power Rangers before? If so, what season?
Ryan: While I was growing up in NZ Power Rangers was never on TV (I think it was due to some parents being waaaay to over P.C and it wasn't show due to apparent violence) so instead I watched a lot of Dragon Ball, The Simpsons and any weird creepy horror movie I could get my hands on.

Lavender Ranger: Did you know Snide is modeled after the Power Rangers Dino Thunder villain Zeltrax from 2004? He also has an action figure. Fans are upset that Snide and Zeltrax aren't connected. Any idea why that costume was selected for Snide?
Ryan: Yes, I did know that Snide is based on a previous character, but I don't know much about the season the original character came from. I think that the costume portrayed everything they wanted Snide to be, vicious, strong and reckless, as well as the links to Heckyl's style. Snide also looks very different from any villains that have come on Dino Charge so far so I think that helped too. 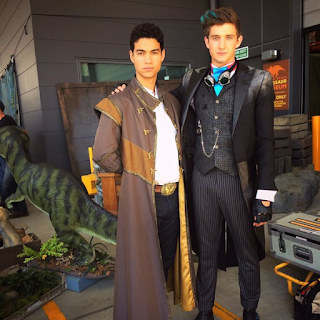 Lavender Ranger: Other than I, have you had any interaction with the Power Rangers fans? Were you warned about how we can get (notorious for being intense) by the other actors?

Ryan: Haha I was warned about the ranger fans! So far all the interactions have been lovely though. Lots of nice fan art and people seem to enjoy the character (at least I hope they do!)

Lavender Ranger: Have you ever been to the United States?

Ryan: No! I haven't been to the US but am planning on going over soon, sometime this year I hope!

Lavender Ranger: Some ADR is done in the US, I assume your ADR is done in New Zealand?
Ryan: My ADR is done in Sydney where I am currently living, but they do ADR all over the world for the rangers wherever they are at the time. Its' so much fun though, I love ADR. 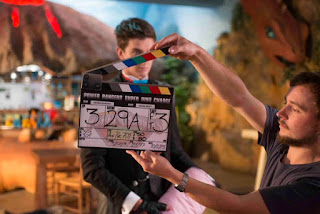 Here are my grandnephew's questions:
Jaiden: Do you have a pet?
Ryan: I always have pets! In Sydney my flatmates have a little dog called Skitch, so she is kind of like my current pet. Big dogs are my favorite though, in New Zealand my family have always had Labradors, the one we have now is a failed guide dog called Charlie....we also have 2 cats, but they just eat, sleep and ignore humans.


Jaiden: Do you have a car?
Ryan: In NZ I have a car...I don't have the best track record as a driver though...my cars are often stolen or totaled.

Jaiden: This question for Heckyl, are you a good guy or a bad guy?
Ryan: That's a hard question. I don't think anyone is strictly good or bad. Even characters like Sledge and Fury think that their actions are justified. In the eyes of the Power Rangers (and most sane human beings) I am definitely a bad guy though.

Jaiden: If you were a Power Ranger, what color would you be?
Ryan: The color blue or black. Sadly those colors are taken and I don't think that Koda or Chase will be giving up any time soon.
﻿
Posted by Lavender Ranger at 6:21 PM 4 comments: 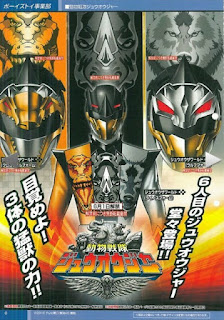 ZyuOh The World is the sixth member of Zyuohger, he is a mix of a golden (or orange) crocodile, black Rhino and silver Wolf. 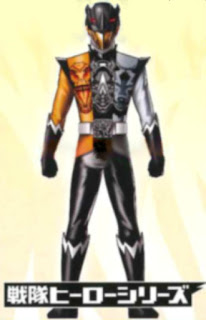 This is a mock-up image, as the catalog pics have either watermarks or wrinkles in pages. Bascially his legs, globes and boots are black. 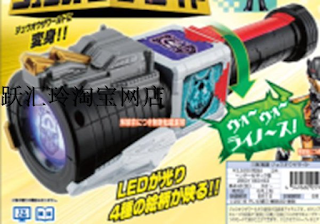 Zyuoh the Light
Zyuoh the World's henshin device is a flashlight. 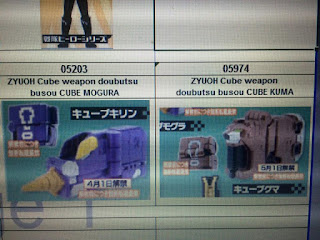 Cube Moguira which is a drill /mole and Cube Kuma, Kuma means bear, this is the first bear to be brown. 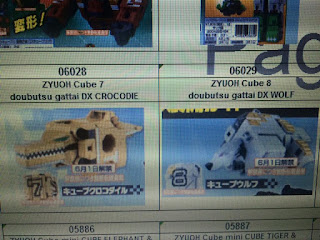 Crocodile and Wolf  are #7 and #8 for Zyuoh The World.

Posted by Lavender Ranger at 9:44 PM No comments: 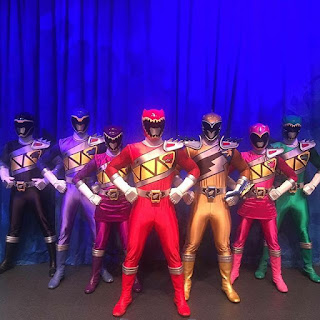 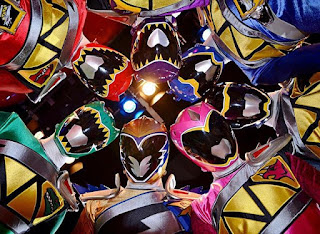 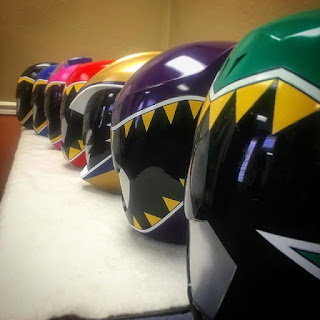 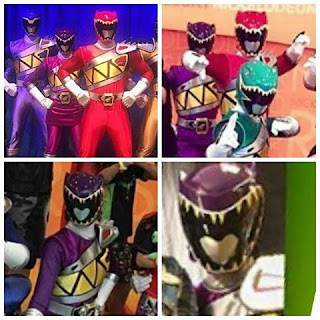