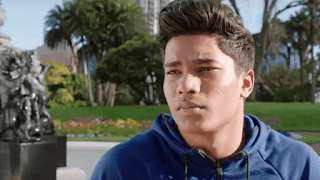 Summary:
Ben and Betty have Valentine's Day gifts for the Rangers and chase a bee. Ravi visits the real Roxy in her coma case and wishes her a happy valentine's day and remembers last year they were together. Meanwhile in Snoozle's dimension, Roxy says she has her memories but no emotions. She comes up with an idea against Ravi. Nate meanwhile gets flowers. Roxy comes and takes Morph-X and creates a monster from a construction dozer vehicle. Nathan calls GB. Back at GB, Devon's cookies are rejected. They are called by the Commander. The trio arrive. Tronics are called and the Rangers call their weapons. Ravi fights the monster. Roxy trips Ravi and he is at the mercy of the Robotron. 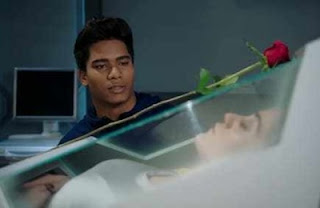 Roxy stops the monster and leaves. Commander wonders what the robotron was after and wanted to know why Nathan was out. She put him on the buddy system and he hates it--he considers it a babysitter. They ask about Ravi, he shows them the picture and saying the avatar rescuing her. He asks Nathan if he thinks the real Roxy is in there, everyone thinks she's evil. Nathan says Ravi is a stickler for the rules. Devon figures he still loves her. Avatar Roxy gives Ravi a rose and says Happy Valentine's Day. She needs a device from Nate's lab from Ravi and he agrees. She leaves. 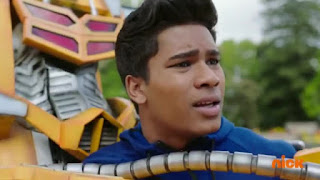 Ravi comes to Nate and asks about the Neural Aligner. Nate says it is theoretical and he would need the virus. Ravi takes it anyway. Devon and Zoey figure out what Ravi is up to and go to the park. Ravi meets with Roxy. The Robotron grabs Ravi. Roxy plans to infect Ravi with the virus. Roxy reveals she is all evil. The Rangers stop it. The Rangers fight the monster. She teleports away with the Neural Aligner. The Rangers morph. Tronics are called. The rangers fight the Tronics. Blue and Yellow fight the monster. Beta Gigadrone is sent to become Shoveldrone. Cruise comes to Devon and he deploys the Racer Zord. The battle mode fights Shoveldrone. He outruns the missiles. He changes to Cheetah Mode. Yellow surprises the monster with a back attack. The zord becomes battle mode again and Devon calls his blaster to finish off the Gigadrone and the others destroy the Robotron at the same time.

Snozzle tries using the Aligner on Evox with a machine he makes. Blaze and Roxy listen to this. Back at GB, Ravi talks to sleeping Roxy. Ravi apologizes to the Rangers. They say they have to work together. They side hug. Zoey gets flowers from a secret valentine. Commander Shaw tells them  of the gifts in the hanger. Betty has a big sticky fly paper to get the bee. They get stuck on it and the Rangers find them.

Review:
A little late for Valentine's Day episode but nice they tried. I liked the moments between Ravi and Roxy. Great episode expect it felt Story A took over Story B and Story B was about a bee so good they kept it short. Also, Nate having a crush on Zoey is interesting as he is still being treated as a kid so it would be interesting if they is explored. Hopefully the Neural Aligner will return to help Roxy and Blaze.
Posted by Lavender Ranger at 8:39 AM No comments: