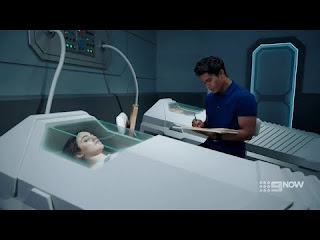 Summary:
Late at night at the base, Nate leaves and Ravi asks if he can work on his saber. In reality, he is working on his artwork. He paints Roxy as she sleeps in the chamber. Smash comes in and Ravi erases his memory. Smash gets the urge to paint and paints the base and then public property. Ben and Betty find him when they are on their bike. Betty tells the commander. They try using water from a hose but fail. The Rangers arrive and a new Robotron arrives. The five morph. Turbotron goes after Smash while Roxy and Blaze fight the five. Devon beats Turbotron back. Ravi leaves with Smash. Devon fights Tronics and Turbotron leaves. 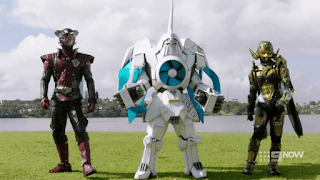 Ravi puts Smash in a warehouse when Turbotron arrives. Turbotron blows them with a turbine. Ravi tries hitting him but is blown away. Ravi fights the air and uses his gorilla strength. Smash comes and protects Ravi. Scrozzle puts together the beast power discs. Vargoyle arrives and asks for the fury cells and Scrozzle blames Roxy and Blaze. He beats them. Evox arrives. Scrozzle made Vargoyle but he turned against him. Evox offers him to work for him for the beast powers and Blaze and Roxy are mad. Evox said he would reward his strongest servant. Nate checks on Smash, Commander says working on art is a waste of time. Smash is corrupted and they can't use the zords. Ravi admits it was him and have them promise not to tell his mom. 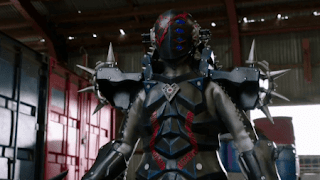 The Rangers go fight Vargoyle (in a cloak) who is collecting Morph-X, who play-acts for the drama. The five morph. Vargoyle calls Scrozzle, whos says he is playing games with his enemies. The Gigadrone attacks a tower. Devon and his zord come but can't climb the tower. Zoey comes in on her zord to help Devon. Zoey flies away. Nate wants Smash to paint and Smash leaves and goes to help Ravi. Meanwhile, Ravi and Steel corner Vargoyle. Ravi leaves and Steel is on his own. Vargoyle takes off the cloak and beats up Silver. Wheeler zord comes in and turns upside down. Racer Zord bounces off and slashes at he Gigadrone, destroying it. Silver continues fighting Vargoyle. He de-morphs and Vargoyle is about to blast him when Gold Ranger arrives. Vargoyle teleports away.

He shows the Morph-X to Evox and Scfozzle gives the upgrade to Vargoyle. Roxy and Blaze watch this. Evox promises Vargoyle power if he succeeds. Blaze says to work together to get Vargoyle, Roxy agrees. Later, Ravi apologizes to Smash and Smash reveals he knew about the art for months. He kept it to himself. Ravi says he was wrong for not trusting him and hugs Smash. Smash says he never did it before but Ravi says not to get used to it. Smash says his mom will accustom to it one day. Betty and Ben get buckets of soap water on their heads.

Episode Review:
It is interesting as Ravi keeps hiding stuff from his mom, especially artist talent. It is nice Smash protects Ravi and keeps secrets for him but would have liked his character would be different. I know he is 'cute' for kids and does stereotypical gorilla. Maybe if he was a bit more fleshed out of a character and less stereotypical and hammy. Other than that, a good episode and an interesting storyline about Vargoyle being a creation of Scrozzle that turned against him. Vargoyle is an interesting character but has the same generic villain voices they've been doing lately.
GRADE: B

Posted by Lavender Ranger at 4:14 PM No comments: 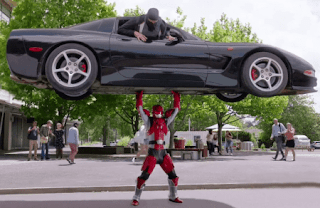 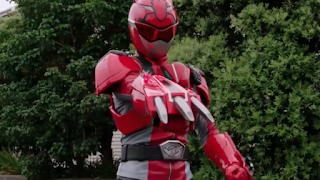 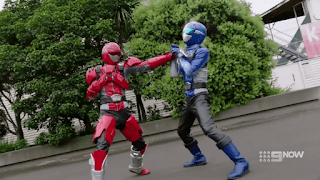 GRADE: B -
Posted by Lavender Ranger at 3:51 PM No comments: