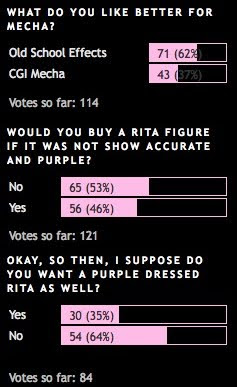 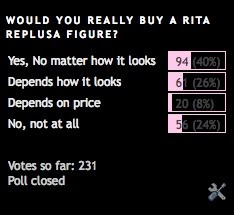 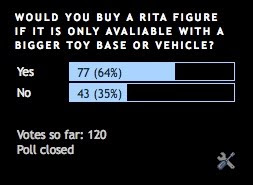 THANK YOU FOR THAT ATTENTION, BANDAI AMERICA!
Posted by Lavender Ranger at 2:39 PM No comments: 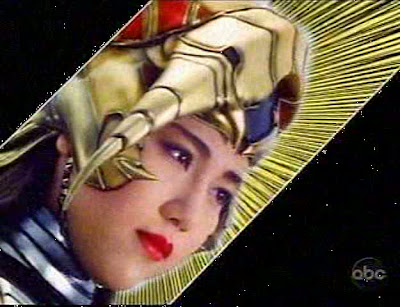 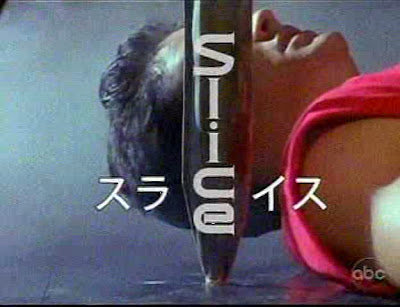 "Green With Evil Part 3" (The Rescue)
The remaining Power Rangers split up in order to find Jason and Rita resurrects Scorpina. The whole sequence of the Scorpina ball always seemed creepy and strange to me. The pulsating of the cocoon always seemed sensual to me. In the original Zyuranger footage, the ball continues going around houses and hits a house of a little girl. Goldar is relieved by the Green Ranger. The Rangers fix the communicators and teleport Jason just in time. Then they must fight Scorpina. Goldar has Rita pull her out at the last second and then Goldar goes to battle, having the Rangers fear what's next. 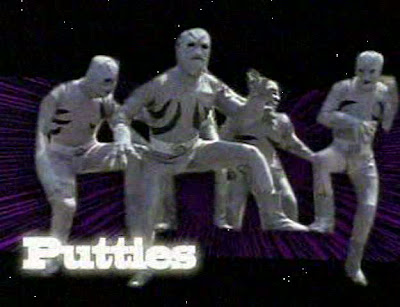 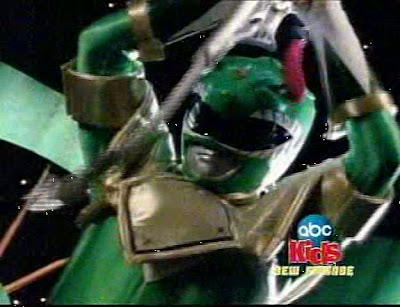 Review:
The reversion continues with the kanji in strange places. And the weird glows where there is no glows meant to be. When the Putties attack, we get a still frame that says 'Putties,' for some reason, you'd think kids would already know they are called putties. 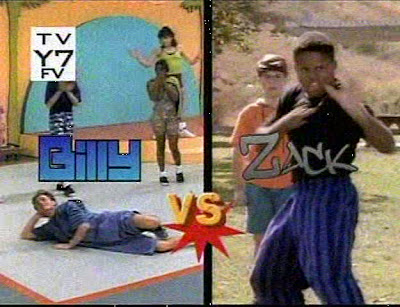 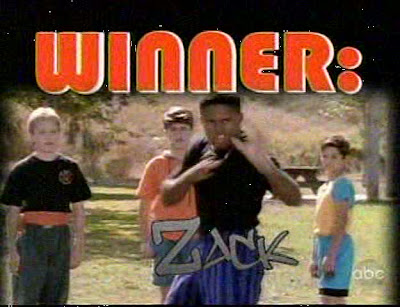 And for some reason, interupting the whole episode, we are treated to a 'Billy vs. Zack' Dance-off, taking two clips, Billy's clip is from 'Different Drum' and Zack's is from 'Itsy Bitsy Spider.' The same clip that had been removed from Zack's title card in the opening sequence. 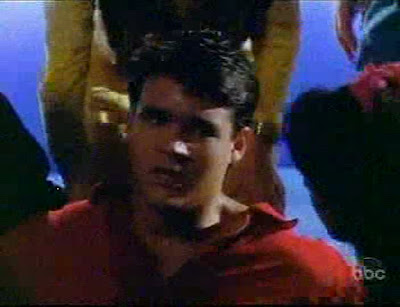 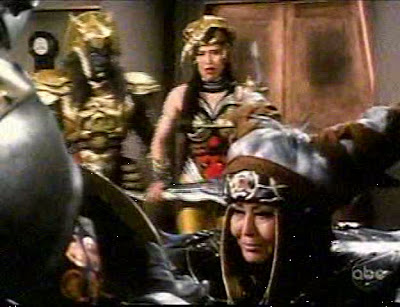 And what might be the biggest mistake of the original MMPR episode is Goldar speaks to Rita in the palace about Kimberly when Goldar is in the Dark Dimension. But we only hear Goldar, not see Goldar. Maybe he is communicating to her from the Dark Dimension. But how does he know about Kimberly when he is with Jason? So, yeah, a slip otherwise. And if it seems Scorpina and Goldar have a past, in Zyuranger, they were married.

Ami Kawai looks as sexy as ever in HD!
Posted by Lavender Ranger at 5:14 AM No comments:

I am only covering those giant robots called 'zords' on Power Rangers.

Dora Talos / Cyclopsis
In MMPR, it was Goldar's 'Warzord.' In Zyuranger, Dora Talos was a robot piloted by Bandora's son Kai and hypnotized children. Originally in "Doomsday Part 1 & 2," Rita was going to have a son named Bubba (Kai) and he was going to pilot it.

Daijinryuu / Serpentera
Serpentera was Lord Zedd's personal zord. Daijinryuu was no zord, it was a god, angry at the ruckus that the Dairanger and Gorma were making. Serpentera became the wedding carriage for Rita and Zedd. In Japan, this is the only one to get a toy. In America, it got a toy as well.

Braking / Metallosaurus
Havoc's robot, Metallosaurus almost became a toy. For Carranger, Braking came to RichiRitchihiker in a vision. They both defeated the first batch of cars and was defeated by the new five vehicles.

Norishiron 12 / Terrorzord
In Carranger, created from punch-out cardboard model by Grotch from a Space Land magazine brought by Exhaus. It accidentally reverted into carboard sheets from Chiipuri's youth cream. Porto built the Terrorzord and it was defeated when it was accidentally turned into a camel by one of Divatox's monsters. Elgar was on top of a camel.

G-Zord / Dragontron
Fans make a big deal that this was first robot in Sentai ever to be called 'Zord.' A living battle robot that was lost in a time experiment. After breaking away from Ransik, Frax built his own powerful Zord called Dragontron. In both cases, the Red Ranger from the future came to take the space of the present Red Ranger.

NeoCrisis / Doomtron
Gien and Frax's final robot, they had the same power source as V-Rex/Q-Rex, making vortexes in the sky. In Time Force, Ransik took it for himself, and made the enslaved Frax pilot the robot against the Rangers. Red blasted the Rex with its controler weapon, converting its blue crystal into a yellow one, giving it enough power to destroy the robot.

Megatagame II / Zurganezord II
They were both made and piloted by Sargain/Zurgane. It both had a slim version.

Megatagame III / Zurganezord III
They were both made and piloted by Sargain/Zurgane. They both were used to take the information from the Karakuri Ball/Power Spheres.

GainGain / Hyper Zurganezord
The other form of the last robot, that came with its own sphere.

Megatagame-sexy / Kaprizord
Before Sargain died, he left the others giant robots. This one was for Wendinu. Nanami punched the glass and painted Wendinu's face. In NS, Kapri got the zord and it was destroyed by the Hurricane Megazord and the Mighty Mammoth. Kapri and Marah got Shimazu to pilot one of 'their zords,' not saying it was Zurgane's.

Giant Musasabi / Shimazuzord
A re-colored model of Musasabi, the original didn't appear in NS. Sargain made it for Satorkara. Kapri and Marah gave this robot to Shimazu.

Lothor's Zord
This wasn't even a zord, nor a robot in Hurricanger. It was the big boss Tao Zanto. The Lothorzord is destroyed, but in the process, its destruction takes out the Storm Megazord as well.

Replicant Zord
Mezadon made a copy of the Thundersaurus. It appeared briefly. This is an actual zord. It was called Blizzard Force Megazord in the toys and had different colors. It was originally called Bakureno in Abaranger.

Zelzord
Same thing as Lothor's Zord, it wasn't a robot in Abaranger. it actually was their headquarters taken over by their boss. In Dino Thunder, it was called the Zelzord, Zeltrax's.

A-Squad's Megazord
This Zord (that went from flying drill to robot) was used by the SPD A-Squad Power Rangers when they kidnapped Cruger. Destroyed by the S.W.A.T. Megazord. All the robots used by the villains in SPD were not called 'zords.'

Moltor's Robot and Dragonizer could also be considered 'evil zords.'

Lavadactyls
They were designed to resemble the dinozords from Dino Thunder and were piloted by Lava Lizards.

Many of the robots used by the Fearcats, Flurious and Moltor could also be considered evil zords in Operaiton overdrive.
Posted by Lavender Ranger at 9:03 PM 1 comment: 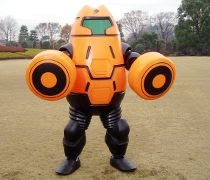 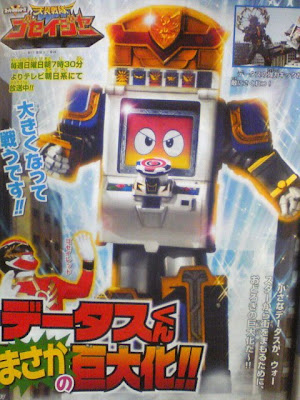 Related: The Long Line of Alphas
Posted by Lavender Ranger at 8:30 PM 7 comments:

African-Americans in the past and racism ignored

I wanted to mention this long before but I forgot. That I found it strange that when Aisha and Katie traveled to colonial or western times, the fact that they were African-American was not mentioned. From approximately 1776 to 1865, slavery of Africans in the United States was legal. But of course, Power Rangers is meant for children and to not upset anyone, they probably avoided it. But it is part of history and it could have been a nice history lesson. And for Katie, they could have sent someone else to the past. 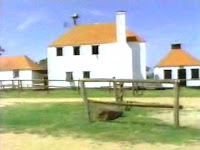 "Return of the Green Ranger" Part 1, 2, & 3
I don't have pictures of Aisha in the past. Aisha, Adam, Rocky, Kim and Billy were sent to 1795, colonial Angel Grove, California. No one took a second look at Aisha or said anything about her. And also the fact that there were no other African-Americans other than Aisha there.

"Wild West Rangers" Part 1 & 2
Kimberly was sent to 1880, when the Reconstruction was still prevalent and segregation was not passed by law, but was around. She meets Aisha's ancestor, Miss Alicia. She, again, was the only African-American and no mention of her skin color. But that's good isn't it? Maybe they were Northern and progressive.

"The Legend of the Clock Tower"
Katie landed in the past, somewhat between 1760-1800 in Silver Hills. She stood out but probably not because of her color. She was the only African-American there. They should have picked another Ranger to go to that era, it was just awkward.