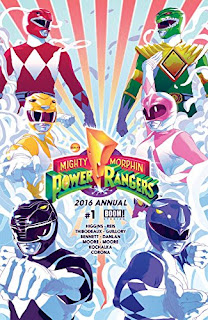 How familiar are you with the franchise?
I'm very familiar with the franchise! I watched the series premiere back in '93 when it first aired. I followed the series on and off, right up until the beginning of Turbo. After that, I dropped off for a few years and came back to it when I was in college. I got nostalgic for the show and went back to rewatch it, which led to me checking out the (then) current series - Wild Force. I loved all the new stuff they were doing and went back to catch up on everything I had missed. I've kept up with the series ever since, right up to this year with Super Ninja Steel. I've also added Super Sentai and Kamen Rider to my viewing list in recent years. 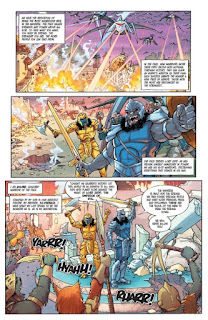 How did you get the job?
My father got into the industry 25 years ago and I would go to conventions with him; even giving away my own homemade comics at San Diego Comic Con back in the mid/late 90's. In college, I majored in English with a specialty in Creative Writing, and tried to break into the industry a few times with little success. Shortly after Boom got the Power Rangers license, they reached out to my father to do a short story in their upcoming annual. They suggested we do a story together - a father/son thing. That was my first opportunity and I gave it my best shot, hoping that I could deliver something good enough that they would ask me back for more work. Luckily, the fans have always responded very well to my work and Boom has continued to offer me great new opportunities to tell more stories.

How is it writing for Boom?
Boom has been fantastic to me. They have been so open and encouraging of my ideas. I've worked with different editors on different stories, and they've all been very accessible and eager to talk through anything I want. I wouldn't expect that type of communication with a guy like me who's writing a few pages in one of their books. I'm very grateful to them for that! 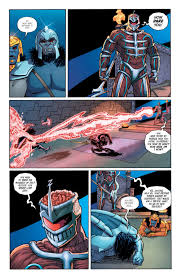 You mentioned your dad, how is working with your dad? Have you always had a good relationship?
I have a very good relationship with my dad. We're very similar in a lot of ways. Working with him was no different than working with any other artist. One thing I did enjoy was that there was a little more room for collaboration. With these short annual stories, I don't get much direct communication with the artist. With my dad, he could call me up and suggest ideas. For example, in my original Goldar script, Lord Zedd is the one who kills Silverback. However, it was my dad who called me up and said "I'm working on the pages and I noticed that this is Goldar's story, but he's not an active participant in it - he's just observing events and reacting. Let's get him involved. Maybe he can be the one forced to kill his brother." It was a great idea and I rewrote the scene to reflect that. I think strong communication between the writer and artist is key to a comic's success.

You mentioned the story of Goldar’s brother that story resonated With me the most. I like how it tied in alien Rangers, Master vile and Lord zedd’s origins with the zeo Crystal. Before focusing on silverback, did you guys know Goldar was based on a Griffin in Zyuranger? And that he didn’t originally speak until a spell was cast? Also, in the first MMPR movie, Morton the pig was to be his cousin.
Yeah, I'm well aware of the Sentai elements. I try to do nods to the original Japanese version where I can, but always focus more on the elements presented in the American version.

What is your favorite season of Power Rangers other than MMPR?
I have a couple of favorite seasons, but I think Time Force is the winner. I think that season did the best job of delivering both a complete story and character arcs. The tone was consistent throughout the season and all the characters were very likable (IMO). RPM is fantastic, but I think it's slightly held back by duplicating In Space's brother/sister story. In Space is brilliant, but given the job of wrapping up 6 years worth of storylines, I feel like there were some unanswered questions and lingering character threads.

Who is your favorite ranger?
I'd probably give you a different answer every time I was asked. The obvious and cliche answer is Tommy. He's essentially Optimus Prime - the face of the franchise. I'm a huge fan of Jason/MMPR Red & Zeo Gold. Jen/TF Pink. Doggie/Shadow. Those are the big ones for me. 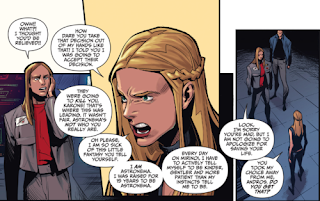 Which character do you feel you found a “voice” for?
I feel very comfortable with Karone/Astronema. I can put that character in pretty much any situation and know how she'll react to it. I also feel like I found a voice for Finster, though it sounds very different than the voice on the show. In my head, it's the same character, but we're seeing his dark side come out more when he's alone - as opposed to be surrounded by other monsters and Rita. '

Who is your favorite character, villain, ally or ranger?
I think Astronema/Karone is one of the most well developed characters in the franchise. She may be my favorite. Her arc from the beginning of Space to the end of LG was so well done.

Are you working on any future stuff?
There's nothing to announce right now, but I'll be sure to let you know when there is. 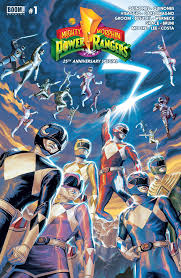 How is fan response to your work?
The fans have been awesome to me! Every time a new story comes out, people always have wonderfully kind things to say about it. Their positive comments have helped me to feel more comfortable with what I'm producing - that I'm on the right track. Occasionally, I'll see criticism and if it's constructive, I take it to heart and try to avoid that pitfall in the future. For all the fans who have been enjoying my work, I want to do my best to live up to their expectations.

What other sci-fi, fantasy and any other written work inspires you?
I try to take things from every type of storytelling I can find. I pull from movies, TV shows, cartoons, video games, music, books, comics, pro wrestling, etc. Growing up, I loved things like Star Wars, Final Fantasy, and heavier anime like Evangelion. I'm always drawn to stories that focus on characters above all else. I want to feel emotionally connected to a character. Make me cheer; make me cry! Take me on a journey. I try to do that with my stories. Even if they're only 8 pages long, I want the reader to feel something about that character by the end - good or bad.

Who are your favorite writers in general? Not only comics.
I really like Lewis Carroll, L. Frank Baum, JK Rowling, Neil Gaiman, and Alan Moore. The show runners on modern Doctor Who - Russell T. Davies and Steven Moffat. Joss Whedon. Matthew Vaughn & Jane Goldman are a great screenwriting duo. Those are the big ones that come to mind.

What comics did you like as a child? Have you re-read them as an adult? Has your perspective changed?
I grew up on the big ones - Batman, X-Men, Spider-Man. I've re-read most of them as an adult. The charm and nostalgia keep them enjoyable to me, but I see a lot of problems that I didn't notice as a child. Things go by too fast, there are odd logic jumps. There's a lot of big shock moments, but no time to stop and take it all in. However, they were made for a different era that wanted different things, so I always keep that in mind when looking at things from the past.

I like that what you said about the comics and pacing. I read about manga artists and they say they rely on the reader to be judgment on time and taking breaks but I see art as fluid, you need a page of space to let you know you need to take a break.
Yeah, every writer has their own philosophy! I approach storytelling more like a director - envisioning the flow of the story to push the reader towards the experience I want them to have. 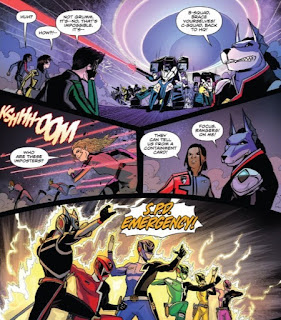 What PR character you wish you. Hold write for that you haven’t had the chance?
There's quite a few that I would love to write for. I'd love to do a Jason/Tommy story. It'd be fun to do something with the Alien Rangers. Wes & Jen from Time Force. I have a big soft spot for the Ninja Storm cast. And, of course, Doggie Cruger.

Any advice for aspiring writers?
Stay connected with the world - listen to the way people talk, how they think, and how they respond. If you want to be a writer, you need to be writing every day. Even if you don't have a job, be honing your craft. Whether you want to write comics or novels or screenplays, be doing it now. Get your rookie mistakes out of the way when no one's paying attention. If I wanted to be a musician, the first time I try to play guitar should not be in a recording studio. Same with writing; your first ever script should not be the one you publish.

Posted by Lavender Ranger at 3:21 PM No comments: 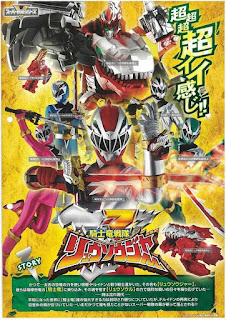 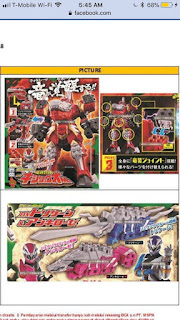 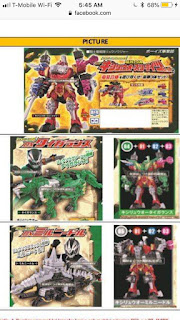 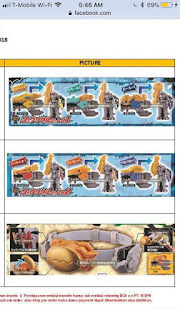 The RyuuSouls seem to be "knight spirits". They are definitely like RangerKeys, and install in the mecha.
-The RyuuSou Join ports on KishiRyuuOh are new, and lego-like.
-Triceratops should be "TriKen" as it's a sword. Still not sure what kind of weapon Akyloze is.
-The three initial mechs combine to form KishiRyuuOh 3 Knights. It's one part gattai, and one part armament.
-TigerLance combines with 3 Knights to form KishiRyuuOh TigerLance. This 4-combo seems to actually have a new head.
-MilNeedle (seemingly a stegosaur) combines with 3 Knights to form KishiRyuuOh MilNeedle.
-The Henshin Sound for the RyuusouChanger is "Ryuusou Cool!" (RyuusouChanger comes with another RedRyuuSoul.
-The RyuuSouKen comes with another Soul.
-Can't make out the names of the other Souls, but like the ZyuDenChi and KyuTama, they definitely give mini power-boosts/attacks. (One says MukiMuki, like Muscular.)
-The RyuuSouBuckle comes with another Soul, and can store 3 souls, as well as holding the RyuuSouKen

Posted by Lavender Ranger at 6:23 AM No comments: