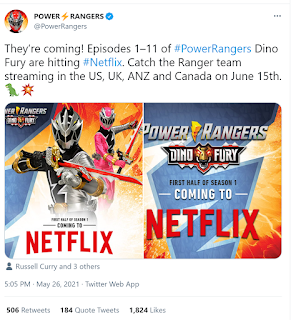 Power Rangers on Twitter announced on May 26 that episodes 1-11 of Power Rangers Dino Fury would premiere June 15th in Netflix in the US, UK, ANZ and Canada. It has been confirmed by Power Rangers Command Power Hour (https://twitter.com/RangerCommandPH) through their Hasbro source that it is true that episodes 9-11 will premiere. Episodes 1-8 have aired in the United States on Nickelodeon. Usually new episodes are released internationally before they do in the United States. This is the first time new episodes stream on Netflix in the US before they air on Nickelodeon US. I am not sure about the UK and Canada. This does not surprise me as it has already been leaked that season 2 will exclusively stream on Netflix and no longer be on Nickelodeon in 2022.
Posted by Lavender Ranger at 4:18 PM No comments: