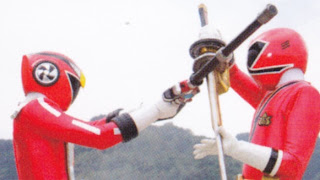 Christmas Together, Friends Forever - the Rangers reflect on their first year together as a team and learn about the spirit of the season.

Party Monsters - a scare-fest when the creepiest monsters from beyond get together for party and trade stories about their battles with the Rangers.

The Clash of the Red Rangers - a crossover special where the Samurai Rangers team with the mysterious RPM Rangers Red fend off the dual threat from Master Xandred's Mooger army and robotic super-villain from the RPM Ranger's dimension. When something goes awry, the two Red Rangers turn on one another and the fate of the world hangs in the balance.

“The new Power Rangers Samurai specials are a perfect fit for the international markets ongoing demand for event-driven programming which offers broadcasters additional opportunities to cross promote,” said Fernando Szew, the CEO of MarVista Entertainment. “The new season of Power Rangers continues to generate stellar ratings as it launches around the world, and we are pleased to be in a position to continue to build upon the brand by offering dynamic and fresh new content to our partners.”


The date to air these are not announced yet, most likely we will be seeing these Halloween and Christmas specials this year. It is great news that the RPM Rangers are from another dimension, explaining the whole post-apocalyptic thing. So this explains suspensions that they were filming a RPM teamup, and why Mike's actor Hector was communicating via Twitter to the actress who played Tenaya.

It is great news that they are from a different dimension. Now this RPM canon stuff can go to rest. Now only if they do the Decade teamup!

This is such exciting news. And not just the RPM team up, but the return to original Mighty Morphin holiday episodes. This makes me feel like kids today are getting an experience similar to my own.

Wow, I guess they've gone back on the "Disney seasons aren't canon" thing, then...

@Dessa Can you go over that again please I are you saying like they consider the Disney era apart of there era or something.

Dessa, even among the Disney era RPM was often regarded as being in it's own continuity separate from all the other seasons.

i think this is business move by saban, getting rpm actors would be easy since they r nearby and if he bought shinkenger footage, he most likely got shinkenger vs go-onger. and by 'advertising' RPM, a season that didnt get seen a lot, it has people go watch it on netflix.

Great news, I love team-ups, will be looking forward to the new episodes!

Nothing needed to be explained about where RPM fits in with the other seasons since it's in the future and not just a couple of decades in the future like SPD.

People need to stop overthinking and compartmentalizing everything. It's not that hard.