Red
Red usually represents aggression, love, negativity, passion, socialism, heat, fire, beauty, leadership, injury, danger, blood, and conservatism. Red is used as a symbol of courage and sacrifice, as in blood split in sacrifice or courage in the face of lethal danger. Red Rangers are usually Stalwart Leader, Reckless or Childish Leader, or young upstart. Recently Red Rangers have been reckless or childish, but there some that are serious and true like Scott and Jayden. Most Red Rangers have represented aggression, love, passion, heat, fire, and leadership, but rarely negativity, injury, danger and conservatism. Most of the time when a Red Ranger has an elemental power, it is to do with nature, Mystic Force and Samurai had to do with Fire. Troy of Megaforce was very stalwart and silent, we barley knew anything about him. Tyler of Dino Charge has been more like a kid, happy go-lucky, quick to get upset and as a leader, more like a buddy. 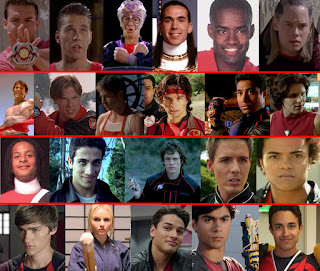 Green
Green usually represents nature, growth, hope, youth, sickness, health, spring, money, and envy. In many folklores and literature, green has traditionally been used to symbolize nature and its embodied attributes, namely those of life, fertility, and rebirth. Green Rangers usually represent nature, growth, hope, youth, health, and envy. Most Green Rangers are the comic relief, stubborn one, or the decent one. Ziggy, Bridge, and Joel are a few that represent comic relief. Most of the time when a Green Ranger has an elemental power, it is to do with nature, Mystic Force had Nature and Samurai had to do with Forest. Mike (Samurai) was impulsive and a prankster while Riley (Dino Charge) was a logical guy who liked puzzles. 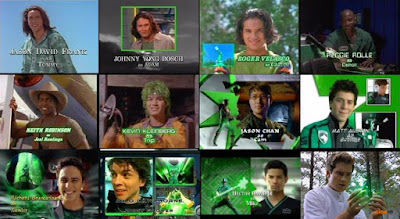 Blue
Ice, water, sky, sadness, winter, royalty, boys, cold, calm, magic, and truth. In the English language, blue often represents the human emotion of sadness, e.g. "He was feeling blue". Most of the time when a Blue Ranger has an elemental power, it is to do with nature, Mystic Force and Samurai had to do with Water. Most Blue Rangers are the calm one, sometimes the stubborn one, when a girl is a blue ranger, most of the time she is the calm one. Most Blue Rangers represent Calmness and truth. For example, Kevin (Samurai) and Kai (Lost Galaxy) have been serious. Lucas (Time Force) was the 'cool' one. Dax (Operation Drive) was the goofy one. Noah of Megaforce was the smart but insecure one while Koda of Dino Charge has been serious, heartwarming and a bit of comic relief. 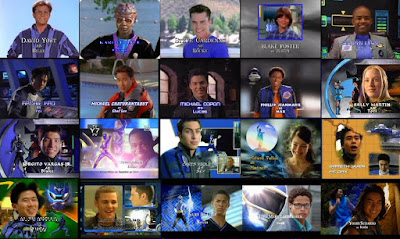 Yellow
Yellow represent sunshine, warmth, fun, happiness, warning, friendship, caution, intelligence, cowardice, love, hope, optimism, imagination, curiosity, surprise and thrill. Most Yellow Rangers are the happy-go-lucky ones (Kelsey, Katie, Emily). They have represented almost all the properties previously mentioned. There are some Yellow Rangers that are the opposite of happiness and optimism, like Taylor of Wild Force and Gia of Megaforce. When elemental, Yellow has been used for a variety of elements such as Earth and Thunder and Lighting like Chip of Mystic Force.

Pink
Pink has represented girls, love, health, fairies, beauty, cuteness, and glamor. And all the Pink Rangers have in some way represented all those aspects (fairies only to a few). The majority of the Pink Rangers in Sentai had to represent feminine side, be super girly. The few Pink Rangers that have been tomboyish have been Jen, Vida of Mystic Force, Rose, Shelby, and Mia. Emma of Megaforce was cheery and Shelby of Dino Charge was tomboyish and a dino lover.

White
Most of the time, White represents bravery, purity, nobility, softness, emptiness, knowledge, snow, heaven, peace, life, clean, air, sunlight, surrender, clouds, frost, angels, weakness, protagonist, winter, and innocence. White Rangers have represented bravery, purity, nobility, softness, knowledge, snow, peace, life, clean, winter, and innocence since half have been female and half have been male. The one that represented snow and winter is Udonna, the one that has been complete opposite was the evil White Dino Ranger. The newest white Ranger is in Ninja Steel. 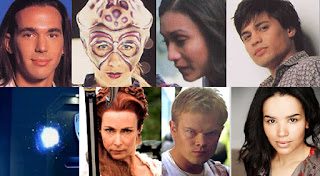 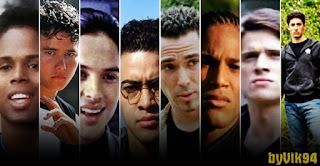 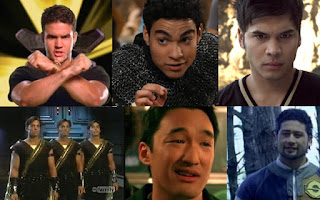 Gold
A cousin to yellow (orange and brown as well BTW) is gold. While green may be the color of U.S. money gold is the color of riches and extravagance. Because gold is a precious metal, the color gold is associated with wealth and prosperity. It can also represent praise, commendation, valuable, positive, superior, outstanding, excellence, and favored person. Most Gold Rangers as Sixth Rangers and are considered the best and powerful. Daggeron were stern teachers, Trey was powerful and serious, Gem was happy-go-lucky and liked shiny things and things that exploded, and Genta was happy-go-lucky, hard working and earnest. Jason, by extension of being the Gold Ranger as well was also seen as strong and powerful. Antonio of Power Rangers Samurai was happy-go-lucky and determined and doesn't give up. Ivan was more a comic relief, with his fish out of water stchick. At this point, the Gold Ninja Steel Ranger hasn't been cast yet.

Silver
Silver, especially a shiny, metallic silver, is cool like gray but livelier, more playful. Silver can be sleek and modern or impart a feeling of ornate riches. Silver often symbolizes riches, just as gold does. Silver can be glamorous and distinguished. While women are seen as old, gray-haired men are seen as graceful aging. The silver-tongued is considered witty, eloquent speaker. Most Silver Rangers (except for Nova and RPM) are sixth rangers and are considered the most powerful. Zhane, Merrick, Tyzonn and Orion are fall under this. Gema like her brother liked exploding things but was a bit judgmental but that changed. Orion is a fish put of water.

Violet
Purple is associated with royalty and nobility (stemming from classical antiquity when Tyrian Purple was only affordable to the elites). A mysterious color, purple is associated with both nobility and spirituality. Since there has only been one Violet/Purple warrior in both franchises, there is not much to go on. =R.J./Violet Wolf Ranger was a neo-hippie, very calm zen master, with his own daddy issues. There was also Koragg who was dark and mysterious. Albert was a scaredy cat and Kendall is the smart one.

Orange
Orange represents desire, fire, engineering, determination, compassion, endurance, and optimism. Fire is repeated from Red and Optimism is repeated from Yellow. There has not been many orange warriors. Most of the time it is mixed with white like with GekiChopper/Rhino Ranger and DekaSwan/Kat Ranger. The only real orange warrior in Sentai were BattleCossack and Toq 6 Gou in Toqger which was not adapted into Power Rangers. Deka Swan as compassate, Ken (Chopper) had endurance, and Dominick (Rhino) had determination.