The usual eprson who posts episode captures didn't post any at the same time as it aired. But Toei.co.jp did post pictures on their site for next week. Ahim and Luka meet Matsuri/Go Pink. And in the preview, they transform into sibling rangers such as Magi Pink & Magi Yellow (who was originally a guy), FivePink, FiveYellow, Go Pink and Go Yellow. The team of course become GoGoV. I wonder if a Six Ranger joke is made. Basco also shows up and brings Rio, Mele and Zuuban to life.

Matsuri helps a mother and daughter with delivering another child. The episode has had some fans questioning if Matsuri is that popular of a heroine to focus the heornie stuff on her, but I think it is the luck of the draw as she was popular, but I think Miku (MegaPink), Momo (OhPink), Mei (PteraRanger), and Nanami (HurricaneBlue) were more popular. Well, American fans are crazy about Mei and Miku.
Posted by Lavender Ranger at 7:13 PM 6 comments:

Calling out Wikipedia Writers for sites

In late August, I will be a full time teacher and unable to work on the blog and sites, we need writers. I am calling out the Wikipedia writers, who write for Power Rangers Samurai, Gokaiger Wikipedia pages and Morphin Grid Wiki pages. We need writers to write for the database of Power Rangers Central, for example the descriptions for weapons, villains, zords, allies, etc. And also for Super Sentai.com. I already got Blog helpers Henshin0 and Pat. Check my blogger profile and e-mail me and tell me if you are interested. You must have free time and watched episodes and have good grammar.

Requirements:
-Free time
- Good Grammar
- Decent Writer
- Show Knowledge
-Must be over 18 years of age (I forgot to add this)

The positions above are non paying jobs. The reason I put over 18 is because I'm 28 and a teacher and just don't want to deal with underage mombo jumbo that might happen. Might sound silly but I just don't feel comfortable with that.
Posted by Lavender Ranger at 7:30 PM 5 comments: 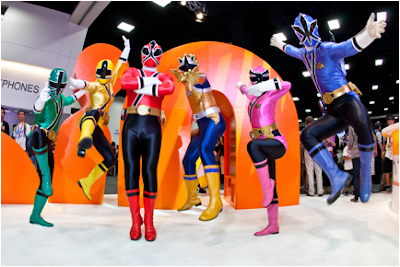 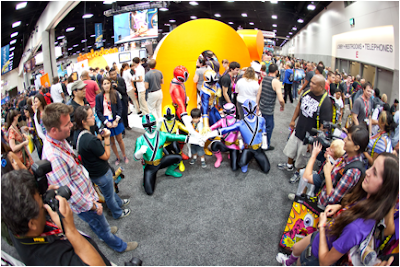 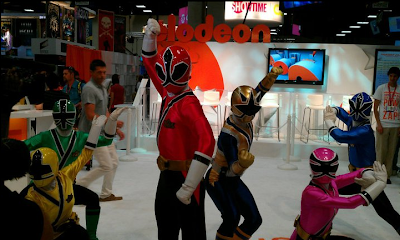 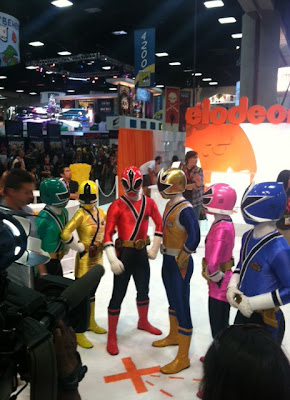 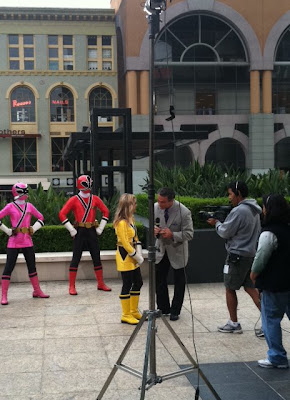 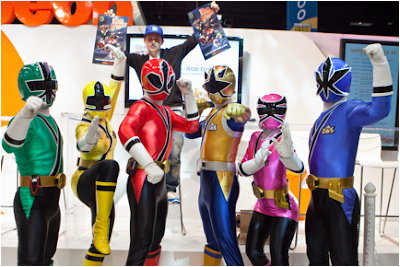 Today during 2011 San Diego Comic-Con International, the Power Rangers got the chance to meet and spend some time with professional skateboarder, Rob Dyrdek.
Posted by Lavender Ranger at 5:29 PM 10 comments:

UPDATED 7/19/11 6:30 PM EST
This had omissions because I was in a hurry, now I finished it.
There doesn't seem to be any 'set in stone' rules for 'unlocking' Legendary powers in Super Sentai. Because the 199 Heroes movie seems to be set in between of Episode 16 and 17 and in Episode 17, the Goseiger powers are used and it is stated they received 11 powers and we still get members from teams that the powers were supposedly unlocked. 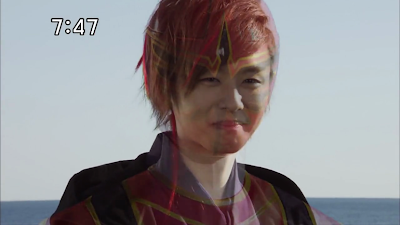 Episode Three saw our first Sentai alum. Atsushi Hashimoto as Kai Ozu, his sky saint Frajel made a cameo. Kai taught Don about 'Courage' and they gained the Magi Dragon. They saw the MagiRed helmet appear superimposed over Kai. The five Magiranger keys glowed. Episode 4 was a character-development episode. 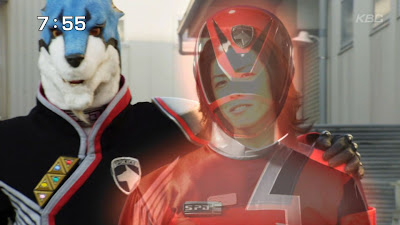 Episode 5 saw three returning Dekaranger. Doggy Krueger's suit actor and voice actor returned and he was in the majority of the episode. Jasmine/Deka Yellow made a cameo in the beginning and Ban/Deka Red made a cameo at the end. Marvelous saw Deka Red's helmet appear superimposed over Ban. They received the Pat Striker, the five Dekaranger keys glowed and made Deka GokaiOh. Episode 6 was a character-development episode. 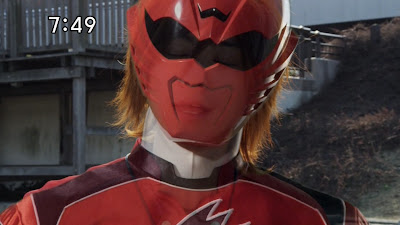 In Episode 7 Jan appeared and Master Shafu made a brief cameo in the end. The Gekiranger keys glowed, GekiViolet's key glowed violet for GokaiGreen. Don and Ahim saw GekiRed helmet superimposed over Jan. The GekiBeasts are set to come out of GokaiOh but no new formation will be made as there is no toy. Episode 8 was a character-development episode. 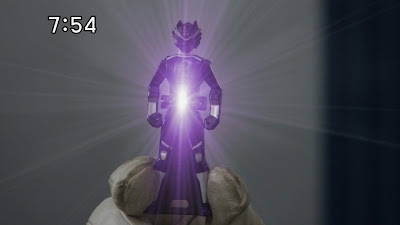 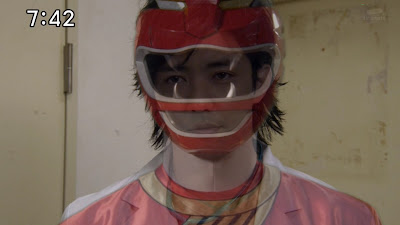 GaoRed's actor Kaneko Noboru appeared in Episode 9 for when the Gokaiger gain GaoLion and form Gao GokaiOh. They saw the GaoRed helmet superimposed over him. Their Gaoranger keys glowed. Episode 10 was a character-development episode. 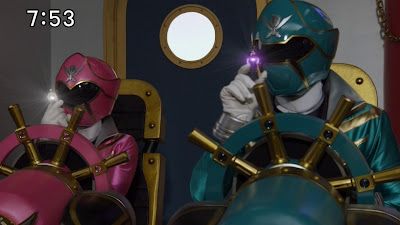 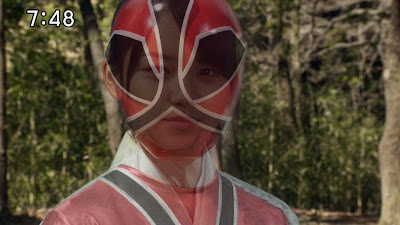 Karou Shiba appeared in Episodes 11 and 12, the first tribute to be two episodes. Their keys glowed and unlocked Shiniken GokaiOh. 13 was a character development. 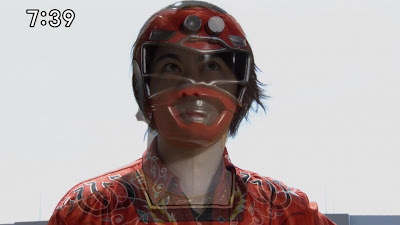 Episode 14 featured Red Racer of Carranger, the keys didn't glow and there wasn't a 'Gokaioh' special thingy and Navi said the powers were useless. They unlocked the powers by copying the Carranger pose and capturing the hearts of children. 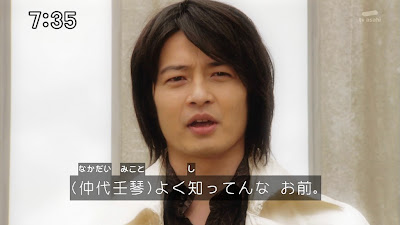 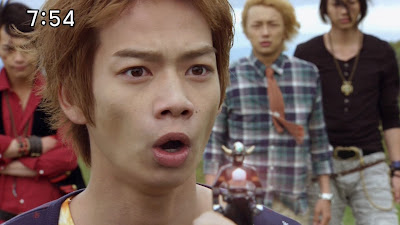 Episode 20 had not only GingaRed but Kuro Kishi/Hyuga, he gave his key to Gai, with the powers of Gingaman. The black key glowed Red. In Episode 40, Gai uses the key to make Goukaioh move like the GoTaurus in a attack movement. 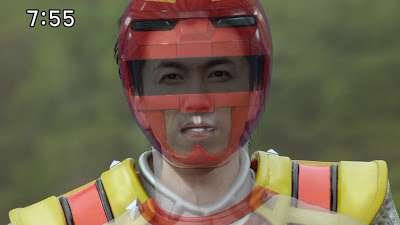 Some superimposing we see early and some later in the episode, some the Gokaiger see and some only the audience see. Red Racer played with his. 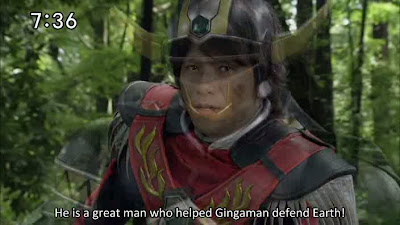 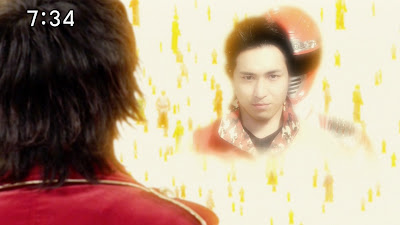 Episode 21 had Akashi, asking them for their help to get a Precious. When they were in GokaiOh, Marvelous took his BoukenRed key out which glowed and conducted a Gekiranger-esque power (because there's no toy) for GokaiOh, where they got DaiBouken's weapon and its spirit slashed at Ryuuwon. Ep 22 is filler. Even though supposedly they unlocked the powers of Boukenger in the 199 heroes movie, they did a tribute in this episode. Marvelous remembered seeing Akashi with the Bouken Red helmet over him from the movie.

From episodes 3 to 11 followed the pattern of 1 ep of tribute and the next for character development. Then on, it was random. 11 & 12 = tribute, 13 = character, 14 = tribute, 15-19 = 5 eps of no tribute (though powers were unlocked) and then back-to-back tribute with 20 and 21. The 'unlocking' of powers seem to be random, sometimes five keys glow, sometimes one key glows or none glow. 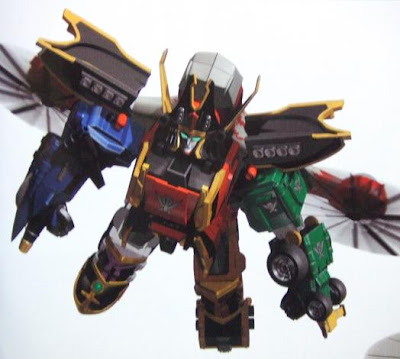 We know we are getting GoGoV (Episode 23), Hurricanger (Episodes 25 & 26), Liveman (Episode 30), Jetman (Episode 28), Ohranger (Episode 31), and Go-Onger (toy coming soon) tributes soon, we are just missing Battle Fever J, SunVulcan, Changeman, Flashman, Maskman, Kakuranger, Fiveman, and Megaranger; and it doesn't mean we won't be getting any of the movies once again, judging by Boukenger and Go-Onger. I'm hoping for Dairanger.

UPDATED 7/29/11
I didn't know where to file this and I just decided to add to this post.

Gokaigers seem to change into past heroes one to five times per episode so far. The least being one (Red, Pink and Green became JAKQ in Ep 10) and the most five I think the most (Luka became a bunch in episode 6). But there are plenty of other examples but this is just one example. Most episodes the Gokaiger become more than one team but in some episodes, they just become one team and the other Gokaiger become one of different teams (Green and Yellow have done a lot of this). There was less than 30 suit gender changes they presented in the magazines and Gosei vs. Shinken, but 3 1/2 unannounced officially before (NinjaBlack, AbareKiller, Go-On Wings and MegaSilver).

As of Episode 23, the past heroes that the Gokaiger have changed into a lot are: 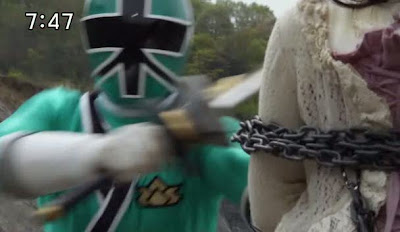 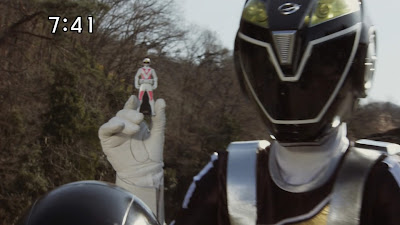 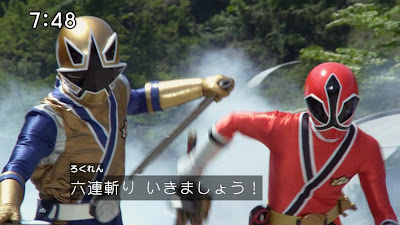 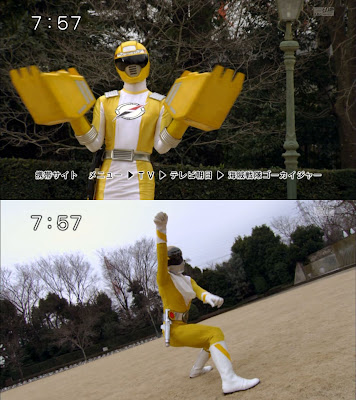 Gokai Yellow hasn't become a hero 4 or 5 times yet, but heroes she has become 3 times are Ginga Yellow, Gao Yellow, Deka Yellow, Magi Yellow, Bouken Yellow, Go-On Yellow and Shinken Yellow. The most changes she has had in one episode was in Episode 6, she had 6 changes (if you count Gokai Yellow herself). 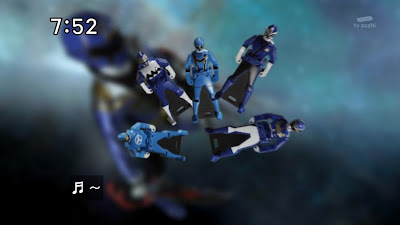 Gokai Blue hasn't become a hero 4 or 5 times, but has used a certain key 4 times. The heroes he transformed into 3 times each were: Shinken Blue, Go-On Blue, Gao Blue, and Ginga Blue. Because of his Blue Final Wave attack in Episode 5, he has used the following keys four times: Ginga Blue and Shinken Blue.