Now in the following weeks, we are getting more and more info on "Kamen Rider Dragon Knight" with pictures and such as it will be premiering on CW4Kids in January. Now I got the shock of my life today to find out Scott Bailey (best known to soap fans as Sandy Foster in "The Guiding Light" and to everyone as the centaur in those Old Spice commercials) will be playing James "JTC"/Kamen Rider Strike, the equivalent of Kamen Rider Ohja. Kamen Rider Ohja was the most dangerous of all the Kamen Riders in Kamen Rider Ryuki. Least to say, he was a serial killer and psychopath, sadistic and homicidal. I highly doubt he will be the same, but perhaps he will just be 'evil.' Oooh, the cast just gets hotter and hotter.

On another note, William O'Leary is also in the cast. He played Tim Taylor's brother Martin 'Marty' Taylor in "Home Improvement," he looks a lot like Doug Stanhope and I thought Doug was William. Hah. 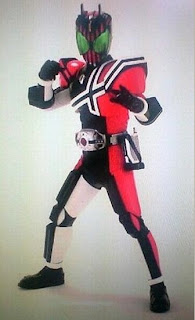 The upcoming Kamen Rider for 2009 is Kamen Rider Decade, which will be celebrating their 10th anniversary. 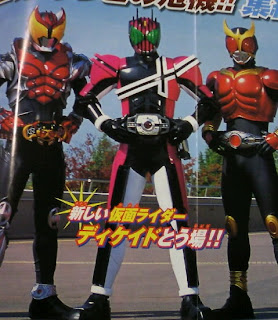 Kamen Rider Decade is said to have the power of past Riders from the Heisei era such as Kuuga, Agita, Ryuki, 555, Blade, Hibiki, Kabuto, Den-O, and Kiva. There will be cards he uses with each Rider on it. Heisei refers to the point in time we are now in Japan. 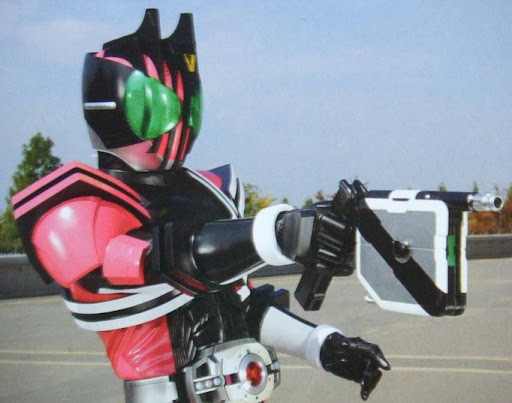 Now there is much debate over what color Kamen Rider Decade is. Many say he is pink. Since culturally in America, pink is currently regarded as a feminine color, American fans don't like the notion that his color is pink. I have said it once and I have said it before, regarding a color to a gender is ridiculous. According to the website "Gender Specific Colors," it would seem that assigning color to gender is mostly a 20th century trait.

Kamen Rider Raia of "Kamen Rider Ryuki," also known as Kamen Rider Sting in the American adaption "Kamen Rider Dragon Knight," has been brought up in the conversation of pink Kamen Riders. He was not be a traditional shade of red. Indeed, he was like a light red, what I like to refer to as 'raspberry red' but some regard as magenta. 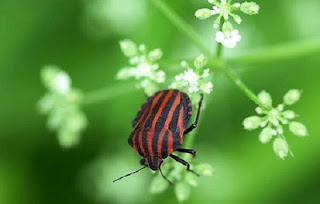 Kamen Rider Decade's color scheme is most likely based on the bug above, which I can not find its name. 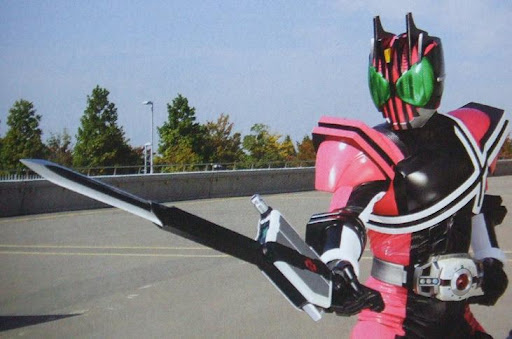 Pink was once a color associated with masculinity, considered to be a watered down red and held the power associated with that color. Red was related to the color of blood, which was what people wanted in the outcome of their victims in war. In 1914, The Sunday Sentinel, an American newspaper, advised mothers to “use pink for the boy and blue for the girl, if you are a follower of convention.” Blue was related to being the color of the sky and girls at the time were regarded to be close to the sky and angelic, blue was considered a fair and danity color. The change to pink for girls and blue for boys happened in America and elsewhere only after World War II. Since the 1940s, the societal norm apparently inverted so that pink became appropriate for girls and blue appropriate for boys, a practice that has continued into the 21st century. No one knows why exactly happened to cause this or to change it. Today, with the effects of advertising on consumer preferences, these color customs are a worldwide standard.

So to me it doesn't matter if he is indeed pink, I think it is and it is just as fine. He's 'masculine' or 'strong' as ever. (I put those terms in quotations not mockingly, but in quotations to note the notions we attached to such a term.) The thought that red is connected to blood and power for masculinity could be another key to why most Kamen Riders are red and majority of Sentai leaders are red. Other reasons, of course, are because of Japan's country's color is red and red is associated to power, strength, and triumph. I had one art teacher that would refuse to acknowledge Pink as a color, she considered a shade of Red, she said it was just Red. So if she heard this conversation, she wouldn't know what all the fuss was about.