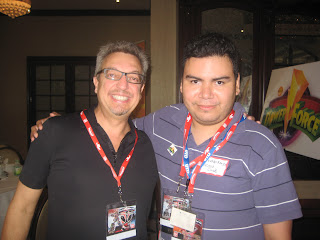 Oh Twitter, not enough space to explain stuff and that's how rumors start or stuff gets misconstrued. I was hoping Elie Dekel would be at the Power Morphicon, no one was sure. But when I was invited to the Power Force Breakfast, I was sure he would be there. When we waited outside and he passed by, I called his name and he looked like a deer in front of the headlights. He was surprised but nice. So later we went inside for the breakfast and Elie did his awesome speech and introduced the Samurai Rangers.
Then I spoke to Marni, who is in charge of online stuff and digital things (I have to get the official title some other time) about an idea of doing an encloypedia chronicling all 20 years of toy guide, character guide and episode guide. I had reservations about talking to Elie. Jill Sylvan, my old friend who I just met after 13 years thanks to PMC, pushed me to go to Marni and Elie because I was shy and had butterflies in my stomach. Marni was surprised and wasn't sure but did give me the all clear. I didn't want to be pushy.

After all was said and done (with breakfast, Samurai cast, kid photo ops, etc.), we (Elie and I) grabbed some ice teas and found a nice quiet corner. It was like a dream. Elie is not only the president of Saban Brands but he has been there since the beginning. I wanted to ask him about 'Zyu 2.' I said: "You know that footage that Saban asked for from Toei and Rainbow productions for season one and two?" He nodded and smiled and laughed. I continued, "You know that fans call it 'Zyu 2' after Zyuranger?" He laughed. He liked it. I asked him if they had the raw footage. He wasn't sure at first. He said they have the masters (final cut of the episodes is what we see on the DVD box set). But he wasn't sure about that footage. Now, I am just paraphrasing... That basically everything went to the mouse house but not everything came back. He said that as we spoke they were going through all the old stuff like props, monsters, suits, weapons, etc. to sort through things. In a panel with ADR director (audio) Scott Page-Pagter, producer Tony Oliver, director John Stewart, and writer Mark Litton about Behind the Scnes stuff, Mark Litton and Scott Page-Pagter said how they only got chunks of Sentai footage and didn't know the names of the shows. When some one said 'GoGo Five,' Mark Litton was like "What?" So if they saw Zyu 2 footage, they just treated it like regular Zyuranger footage, because they didn't worry what series it was. Some monsters were not selected NOT because the monsters were too scary but mostly because if something they did or they were afraid kids did. For example, Mark talked about a tongue monster that licked the Rangers, which was Impersenator ("Rangers of Two Worlds" part 1 & 2 from Zeo). He also spoke of a Iguana monster for "Putty on the Brain" which is 'Zyu2' monster Saliguana and Fox Kids didn't want them using the word Fire extinguisher on the script. They used the extinguisher because it was in the footage. 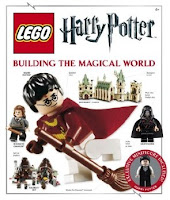 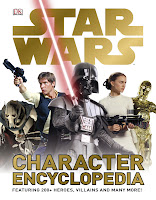 Anyway, going back to my book idea, Elie liked the work I put into it. He said they had one of his staff I believe, didn't catch her name, did a whole 'Series Bible.' When he said 'Series Bible' I thought he meant THE Series Bible. The one writers used. He said it had Red binding. I remember one of my insiders mention it. But this what he was talking about was something this woman put together with weapons, bios, zords, etc. He said they tried with publishers and the publishing companies said it wouldn't sell enough. It might sell but not in the numbers they want. That is why I had people retweet the idea. I know lots of fans would want it. He liked those white books that they do for Harry Potter, Cars, Star Wars, and Legos and others that are encyclopedias. Nothing is set in stone, it might still happen. He said maybe something digital like you download for a Nook from Amazon would work. He has great ideas. But there is a lot of legal stuff and publishing companies and other stuff to go through. So we'll see how that goes. Like I said nothing is set in stone and take this info with grain of salt.

Also, remembering now... He said he was taken aback that fans knew more things than he did. He asked how much I knew about Super Sentai. I said a lot and reminded him about my website Supersentai.com.

Posted by Lavender Ranger at 11:50 AM

I hope that they really gonna dosomething with that idea, it sounds great.

A MONSTER THAT LICKED THE RANGERS?!?!?! Is this FINALLY our answer to what happened to Pythor?!?!?! Like the action figure says "Darting Tongue Pythor" :)

no no, I think they are referring to the Pot monster from Dairanger. I didn't ask about Pythor, because I think I had to have a picture for Elie to remember.

I have had a Ranger Encylopedia of sorts for the last ten to fifteen years, covering Super Sentai, Power Rangers, and more, but have not checked to publish...only using it for my own records. The bad thing is though, that a lot of the show entries are copy and pasted from Wiki. Some of the other info is from personal knowledge and some from other sites. I have been meaning to go through and re-write the whole thing, but have not had the time. I call it "The Ranger Companion."

That is interesting info how they haven't gotten everything back yet.

I think it would have to be Pythor in regards to the tongue monster since it's definitely not the Pot Monster from DaiRanger.

Ok its not the dairanger pot monster. Me and Larry (my pal whose a fanatic of monsters) went through the list and couldn't figure it out. John green of grnrngr.com was not sure either.

Darkranger, email me. Matt and brent, watch the video I took of mark litton and tony oliver talking monster.