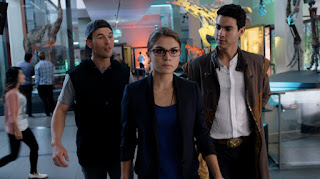 Episode Summary:
Chase and Ivan talk to Kendall about talking to the Silver Ranger and using the Plesio Zord to go to space but she says intergalactic communication is complex. Meanwhile, Tyler shows Koda how to use a sink hose which he is scared of. An elderly woman asks Shelby for tea in the cafe which seems to be empty. The old woman comes and turns off the water. Everyone comes in and Kendall wants a plumber. Kendall and the old woman hug, she is her grandma Betty. She went exploring a cave and shows her a big shield, a light reflector. Koda looks at it and says he knows it. Tyler and Koda and the others go to the canyon where Betty found it. 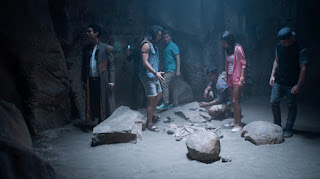 Koda finds a cave and says it was his home. They see the cave drawings, Koda translates them about a forbidden part his grandfather didn;t let him go. Ivan and the others think he can break the rules. He goes past and nothing is happening. They go into the forbidden part and they find a door that Riley and Chase unblock. It glows and releases a force. The force flies out. The Rangers go after it. It is a monster. The Rangers fight the monster. The monster flies to the sun and everyone dives to safety. 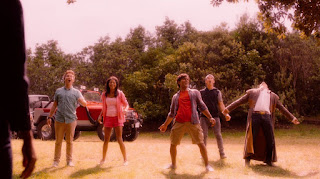 The monster makes the Rangers playful and they forget they are Rangers with a sun beam. Kendall and Koda weren't hit. Shelby says she is on vacation. Koda says if they go into sunshine, it makes everyone stop working. Koda says lens is important. Heckyl is mad at the Loafer and his siter Leisure is in space near the sun. So they are twins. Loafer says monsters are immune to it. Heckyl wants to steal their Energems. Poisandra says the Rangers are on vacation. Chase jumps over the Rangers on his skateboard. Poisandra and Curio want to steal their Energems and go on bikes. Chase sings and Poisandra tries taking his energem. Poisandra and Curio and grow tired. Koda and Kendall fix the symbols and put a light on the lens and it doesn't work. Koda says he shouldn't listen to his grandpa, Kendall says he isn't the first to not listen to his grandparent, so she goes to get her grandmother. Fury and the monster arrive. Ivan teases him with his Energem. 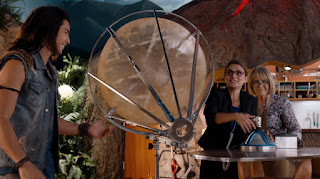 Kendall asks her grandma for help and she holds her shoulders and is happy. Kendall says she always needs her help. Betty looks at the lens and find they should have a secondary lens. She uses from her eyeglasses and puts it in. They change the people in the cafe back to normal. Kendall hugs her grandma. Koda comes out in a sun protecting clothes and meets Fury, Poisandra and Loafer. He morphs and fights them. The Rangers hula wth the monster. 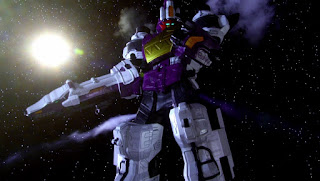 Purple Ranger is in the Plesio Zord. Plesio Charge Megazord fights Leisure and she blows up. Plesio Zord makes the Rangers go back to normal with a lens and the Sun. The Rangers fight Viviks  and Loafer. Red goes super and defeats Loader. Koda is exhausted. Back at the ship, Poisandra and Curio want to go on vacation but Heckyl puts them on cleaning duty. He takes her tickets to Hawaii and gives them to the Vivicks. In the caves, Koda tells his grandfather he is still his hero. Kendall calls them that she could communicate Silver Ranger and talk about the dark Energem. He wants all their data, Kendall isn't sure, Keeper is. 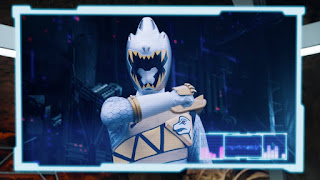 Episode Review:
When you think it will be a Kendall episode, it ends up being a Koda episode. We know zip-de-do-da about Kendall. It would've been interesting if her grandma was the one who funded the museum or something. Also, we have never seen a flashback of how Kendall met Keeper, that wouldve been interesting. I like how it ties in Kendall's grandmother with Koda's grandfather. I don't like that there are twin monsters, one trapped and one in space, it is confusing.
Posted by Lavender Ranger at 8:39 AM 1 comment: