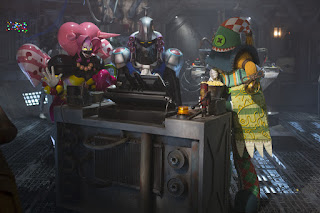 Summary:
Scumlaw, a lawyer, sees his commercial on TV and Fury makes fun of Poisandra and she lets go Scumlaw to get the Rangers. Ivan and Kendall are dressed as a scarecrow and a musketeer. Ivan and Kendall watch as Scumlaw and his mummy police teleport the main five Rangers away. Riley is Sherlock, Koda is a samurai, Chase is a vampire, Tyler is either a matador or a mariachi and Shelby is a pirate. The Rangers are on trial with monsters for destroying monsters and they get a strike for every monster destroyed. When they reach ten marks, they will be destroyed. Pumpkins are the judges, cloaked monsters are the jury and a witch summons the witnesses, old monsters.Ninja and Hunter are called and they lie. Tyler clarifies that they put a virus that turned him into a T-Red. Meanwhile, Keeper finds a document about the trail, that Scumlaw never lost a case. Kendall remembers he controls the jury. Keeper says the only way in is with getting captured. 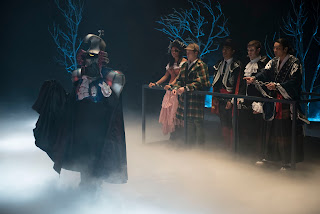 Spellbinder and Golddigger are called out. Spellbinder says he was giving a hypno lesson, we see Chase be hypnotized and snap out of it and breaking Spellbinder's plate. Spellbinder and Golddigger talk about when he was Spelldigger giving coins to people . Chase clarifies the coins made people greedy. The monsters talk about how they were destroyed, interestingly enough no zord footage. they get three strikes. Kendall and Ivan pretend when the mummies come. The mummies are taken away by two mysterious people. Ice Age, Stingrage, and Meteor are called. Ice Age talk about two times he encountered them. This time the zords are shown. Riley tells them that they were frozen in blocks of ice. Stingrage lies and Kods and Chase clarify about Koda being poisoned and turned against the Rangers. 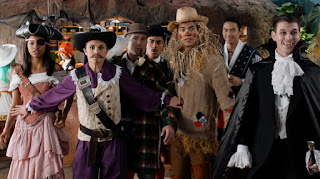 Ankylozord is shown too. Tyler talks about how Stingrage poisoned water to make people forget.  Meteor talk about New Zealand and Albert. Shelby talks about the truth about the Plesio Zord. Meteor claims the Plesiozord attacked him. We don't see Albert in the footage. They get all ten strikes. The guards come in with Kendall and Ivan. The judge pumpkins say they are to be vaporized too. The mummies unmask the jury and reveal they are Poisandra and Viviks. The pumpkin sentence Scumlaw. The mummies are revealed to be Phillip and James. The Rangers are teleported back and fight Scumlaw and Viviks after they morph. The Ranger spot out puns. Viviks form the Vivizords. The Rangers summon the zords. Red, Black and Blue fight Scumlaw. Ankylo, T-Rex, Para and Raptorzord fight the Vivizords. All the Rngers gather and do a final strike on Scumlaw. Curio and Poisandra dont want to see the judges again and bump into pumpkins in the ship. Fury makes a scary jack-o-lantern that looks like him. Back at the Dino Cafe, the Rangers are about to go to a party when they encounter mummy judges who turn out to be James and Phillip once again. 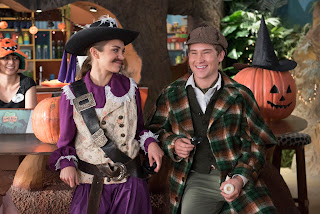 Review:
So no mention of Zenowing, Tyler and Shelby's relationship or Lord Arcanon so this episode could be placed earlier on, maybe even before these new episodes started. Nice sets and costumes but kind of lame that Scumlaw didn't get destroyed by a megazord and they just used old Vivizord footage. Nice court set and cool effect on the ghost monsters. Your typical holiday clip show as it is the sixth Halloween clipshows so far. Anything better than the horrible "Trickster or Treat" from Samurai. Scumlaw is actually important character New Sorrowful Knight Icerond from Kyoryuger.
Posted by Lavender Ranger at 8:40 AM No comments: