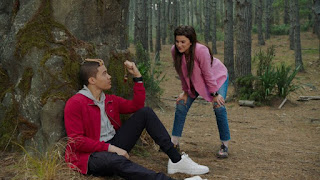 Zayto looks at his pendant and thinks about his mom who gave it to him. Amelia comes and asks what he is thinking about. In the base, Zayto receives a message from his home planet Rafkon but the system overloads and they need a part from Rafkon. Amelia comes up with going to a psychic but while Ollie wants to go to the observatory for the message. Ollie doesn't believe in psychics. They go to the Psychic at a carnival and see Jane get a reading. Jane is told she has powers and wears a blindfold and goes through the city bumping into things to find Sporix for the Rangers. J-Borg finds a Sporix but she gets her foot stuck on a cement bucket. Jane is stuck on a bus. As for Ollie and Jane, Ollie pretends to be in love with Jane to prove the psychic was a fraud. Zayto had given the psychic a necklace from Rafkon and the psychic tells him only good news. But now he is disappointed that she was a fraud. 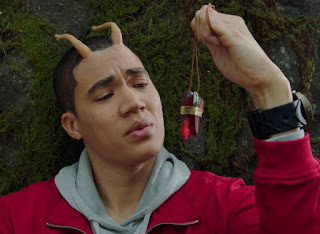 Vapeera appears and J-Borg calls up the hotline about it. Mucus appears but hides when the Rangers teleport in. Vapeera freezes Zayto with the eyes on her chest and slashes at him. Ollie and Amelia hide their vision and morph. The Rangers hide their vision and fight Vampira. Ollie and Amelia go down. Mucus gets a camera and teleports away with Vapeera. The duo un-morph and speak to Zayto. They teleport to the observatory. The scientist says it was an energy surge but believes it was nothing. Zayto leaves them. Amelia gets a message, Buzzblast is down. Ollie and Amelia find that Vapeera took over their broadcast and freezes all of Pine ridge with the eyes on her chest. The video plays on a loop. Zayto is frozen. Solon doesn't freeze because of her cyborg eyes. Zayto can't get in contact with the others. 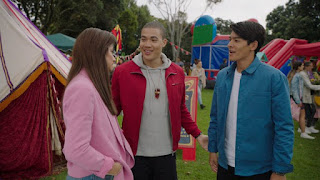 Solon sees the stone from Zayto's pendant. She says it's the same crystal of the modulator. The pendant was from his mom when he became a knight. She told her not to give up. Zayto decides to use the Sonic key. He goes to Vapeera with a blindfold and uses the Sonic Dino Key. It allows him to listen better. He avoids her slash and slashes her. Mucus leaves. Zayto stops the video and everyone is free. Solon contacts the duo. The duo teleport already morphed and with armors from the sonic key. Vapeera grows giant. 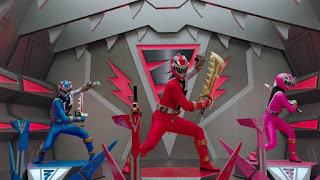 Zayto morphs and they call the T-Rex Champion Zord. Zayto makes Battle Mode and teleports in. The other zords Tricera Blade Zord and Anklo Hammer Zord arrive. They attack the monster. Blue tells Tricera Blade to cut the concrete and Ankylo smashes it. Pink uses the Hover Dino Key and throws the street on her Blue uses a Boost key to fix it as a street. The street covers up her eyes with a key. The Rangers then put keys in for the zords and the zords combine with T-rex. The rangers enter the Dino Fury Megazord. They defeat Vapeera. Void Knight is to get the remains but the Rangers get it. Then Zayto gets the message but it is an alien language he doesn't know. They say it could be an evolved form of the language. He has a renewed sense of 'never give up' from what he remembered from his mom. He then sends his message to space.

Solid episode. Lots happened but it tied all together. Now Jane's adventures have vibes of Ben and Betty. Zayto learned about the blindfold and the necklace tied to his mom. Great writing. I was hoping Jane and Amelia's relationship would have shades of The Devil Wears Prada or even Mia and the agent/reporter Michelle Walsh on Kamen Rider Dragon Knight. Anyways, am I detecting shipping vibes between Ollie and Amelia?

Posted by Lavender Ranger at 9:59 AM No comments: