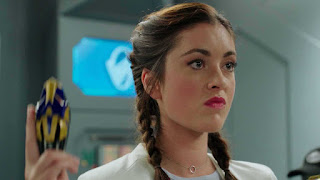 Summary:
Evox brainwashed Nate to create malware and Scrozzle put it in a dart for Blaze and Roxy to put in a new weapon. General Burke has a new weapon. He is about to show a video, but it was Betty and Ben in an embarrassing karate video. Burke reveals they made a new zord Beast-X King which makes the commander and the rangers upset. They plan to make a bunch of them to guard the Morph-X around the planet. The mayor brings in Megan, who the Rangers have bad blood with. Megan created the Beast-X King Zord and the majestic zord comes out of mountains. Megan apologizes to the Rangers because of her past actions. 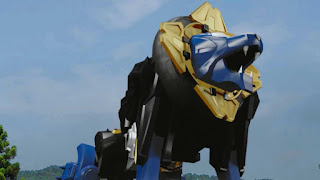 Blaze and Roxy are next to it and throw the dart that makes it go wild. Beast-X King shoots fire. Nate asks if the zord has a firewall against viruses. Nate says it is Evox. Commander tells Devon to go in his zord. The mayor smirks. Cheetah is deployed against the lion and they tackle. Cheetah goes to battle mode and climbs on top while the lion runs off. Devon and the zord is dropped down. Nate tries to take care of the virus. He shows footage from earlier, the dart. His guess is the dart with from Evox. He blames Megan from not installing a firewall. 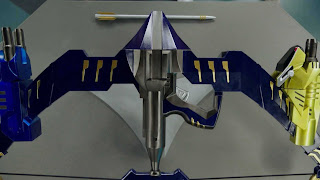 Megan offers help but Nate doesn't want it. Megan gives Zoey the morpher and controller. Megan wants tot alk to Zoey. Steel and Ravi go in a van with a satelite dish. Megan tells Zoey that Nate's plan will backfire and apologizes. She wants her to believe she has changed. She wanted a second chance after showing them she wants to help. Zoey leaves regardless. Ravi and Steel arrive with the satellite and laptop. Nate sends the reprogramming signal. Devon tries to give them a clear shot by jumping on the new zord. The zord tries knocking them off. 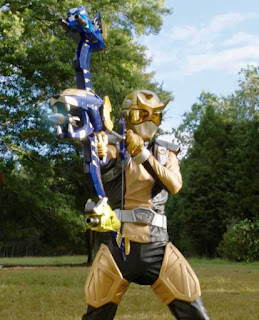 Nate sends the data and the lion flips Cheetah off. Beast-X King changes modes to a battle mode. The two robots fight. Nate sees he gave it a battle mode. Zoey calls the duo back. Devon fights the zord within his zord. Zoey brings up Megan to Nate. She convinces him to get her to help. He runs to her and tells her what happened. She says something has to shoot into the zord. He shows her the Ultra Bow, which has Gorilla and Rabbit DNA. She suggests adding Lion DNA so it is compatible. They initiate the lion dna and it changes with a lion head. Beast-X King Ultra Bow is now the name. Nate congratulates and thanks Megan. The Rangers leave to the site. 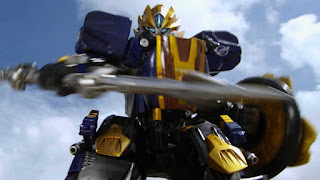 Blaze and Roxy arrive and fight the Rangers. Nate asks for a clear shot. Cheetah punches the lion and Nate shoots the power bolt. Beast-X King turns into a lion and is tamed. The Rangers celebrate. Evox/Mayor is upset and leaves. Cheetah gets on the lion and goes back to base. The Rangers fight the Tronics and Roxy. Blaze leaves to fight Devon. The Rangers morph. Blaze arrives in his rebuilt zord. It blasts at the Racer zord on top of Beast-X King. Beast-X King becomes a motorcycle. Nate destroys Robo-Roxy with his bow. Blaze's zord falls down. Cruise tells Devon they are out of Morph-X. He enters the Beast-X King Zord. He changes it to battle mode. Blaze brings his zord up. The two fight. Beast-X King destroys the zord/Gigadrone. Blaze is destroyed too, seemingly. In the base, Ravi has Evox's dart and says they will destroy it. Megan gives Devon the key and morpher. The General apologies for not informing them. Nate and Megan hug. Megan thanks them. Ben and Betty come in with the camera fixed. Ben grabs the evox dart and throws it at Steel and it goes wild. He detaches his legs. His legs go wild. Ben and Betty take Steel on a cart to get the legs. Everyone laughs.

Review:
If more episodes were like the first act of this episode, bringing in together the plot threads and characters back from other episodes and not just being standalone. The first act ties in Nate being brainwashed last episode, the Mayor being taken over by Evox which has been in all season 2, and Megan from a past episode. It creates conflict between the Rangers. The look on their faces when they find out a zord was created without them was priceless. This episode tries to redeem Megan and the Rangers are understandably hesitant to trust her. This is a good episode with layers that are rarely done in recent Power Ranger seasons. Evox is still affably evil, just for the evulz. It would be better if he had a drive with more depth than just being 'an evil virus.' Venjix of RPM at least had a creator in the mentor. I am not saying Nate should've created Evox but at least having some sort of connection to Evox.

The majority of the story is from Go-Busters but the Beast-X King Ultra Bow is new. But it was clever to add it to the plot as the Go-Busters threw a cure dart on the zord. So it is unknown if the bow idea came from the story or it was just a coincidence. Anyway one of the better "Introduce new toys" episodes.

Posted by Lavender Ranger at 8:36 AM No comments: