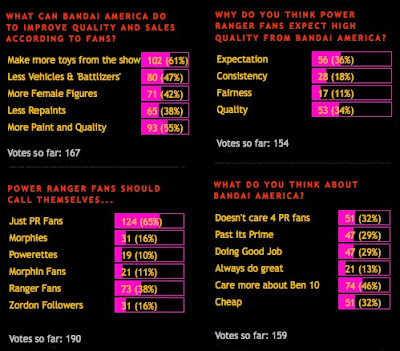 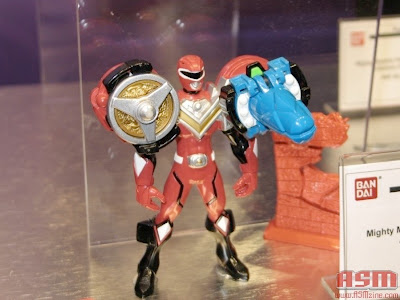 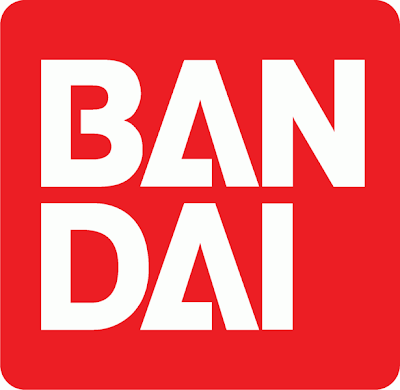 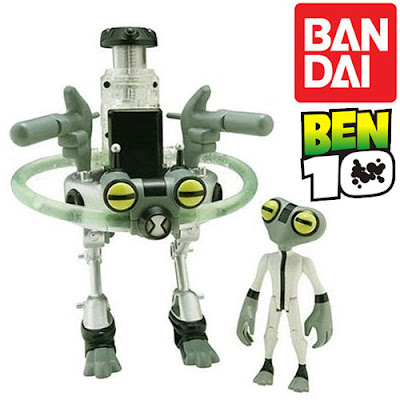 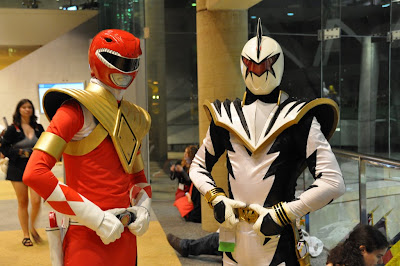 How the sites Ranger Central, Super Sentai Time Capsule, Rider Legacy and Toku Central work out is Mike gets the books and scan them. I write the material, he sets up the section. He scanned Gransazer and told me to make the section for Toku Central. He says the only book of the Seishin series that was made was Gransazer, not Justirizer, nor Sazer-X. I thought I'd post up just a few pictures I found interesting. Please do not leave comments or questions or suggestions about other sections of my sites, they will be when they will be done and I don't know when. Just keep comments about Gransazer please. 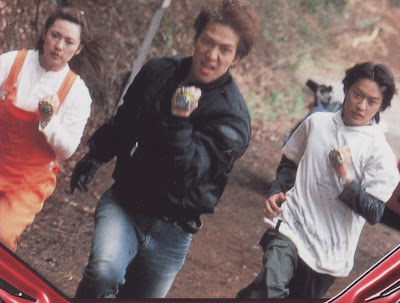 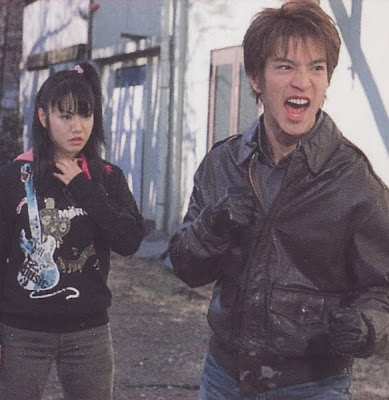 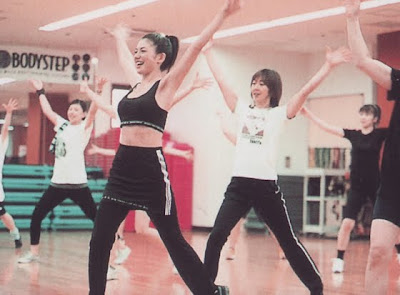 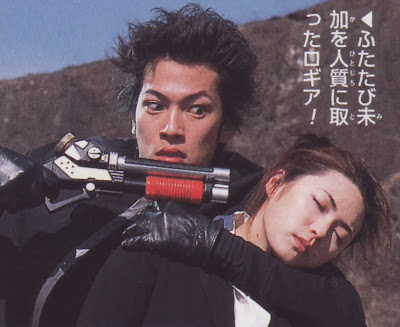 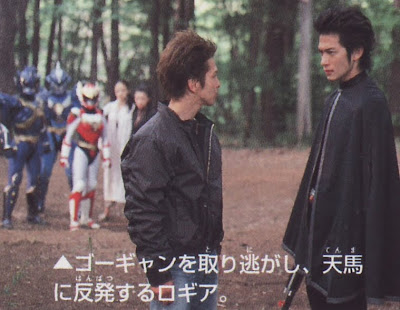 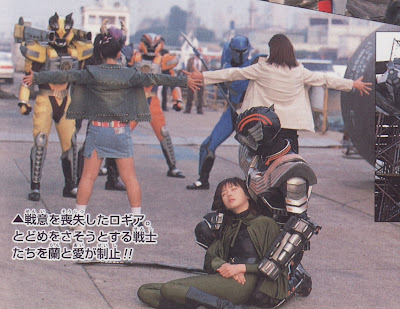 Ran and Miku protect Logia and Lucia as Lucia dies. 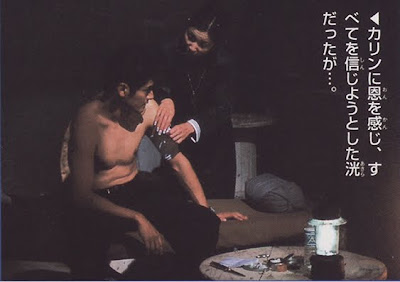 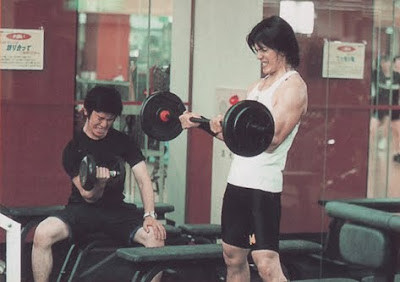 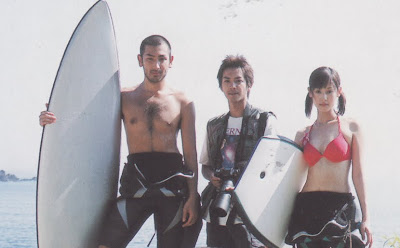 Some pictures were flattering and others weren't flattering at all (those I didn't post).

Takuma Sugawara (Tappei/Gans) and Ryō Segawa (Tenma/Tarius)
We can see here that at least in Gransazer the actors and stuntmen didn't use athletic cups. 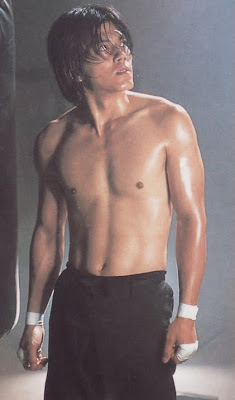 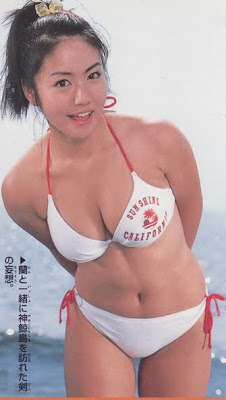 Recently I put a poll about which inside information fans would like to know about Power Rangers and one fan asked me why I didn't put why Billy quit. Well, basically because of this interview. David Yost, who now been producing and was in the development department of Syfy channel. I had my suspicions a few years back when he attended a pro-gay theater event and participated in the No Prop 8 campaign. As a gay fan, I am glad he has spoken out about injustice and homophobia. I am sadden that the production crew treated him so poorly and that it put him in depression. Mr. Yost says that the production crew continued to prod about his sexuality and utter anti-gay slurs. That is the real reason he quit and I think it is a valid one. As I said before it is utterly sad this occurred but I applaud him for having the guts to be true to who he is. He is indeed a role model for me, even if he may not want to be one (I'm not saying he doesn't but in case).

Apparently Bandai America has made a comprehensive online survey for Power Rangers fans, it even mentions Super Sentai. Unfortunately, it asks you if you have bought Power Ranger items that don't exist, like playing cards, statues/busts---it doesn't ask if you want them, but asks you if have already bought them.

Because Glenn Beck mentioned Jesus, Martin Luther King, Ghandi and another gentleman I forgot his name, Stephen Colbert calls them the Mighty Morphin Power Martyrs. Thought I'd mention it.

Some I have lots of pics, some I don't, that's just how it is, deal with it. 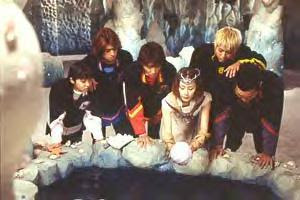 Anaimarium (Gaoranger)
Almost the same deal as the Wild Force one, but less foliage. It was like a sea cavern with strange sculptures. Also the fountain that spouted water and showed images was larger. The gang slept in sleeping bags as well.

Oboro's secret room (Hurricanger)
Under where the Hayate school was, there was a secret cave-like room with lots of monitors and computers. Also two couches with stuff animals of a Hawk, Lion and Dolphin and a table. Also, a special spot for Sensei the hamster with his exercise wheel. There were this two big doors that we barely ever seen open. We also saw a kitchen once and another time Nanami's room, we assume the trio slept there. 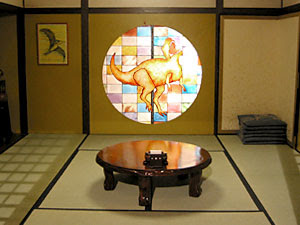 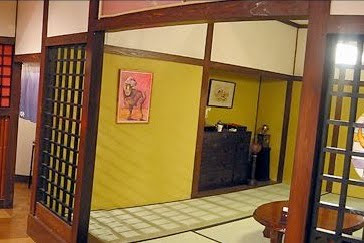 Dinosaur Tea House/Himitsukichi (Abaranger)
Japanese-style tea drinking place owned by Sugishita. It had a giant Tyrannosaurus head with table and TV monitor. The bar with kitchen and back room. Then there was the tea room with small table and dinosaur glass window and small room next to it. Then there was the secret Himitsukichi room with monitor, computers and med stuff. 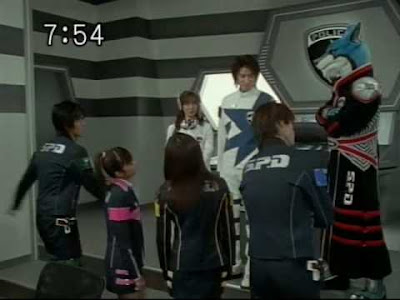 SPD Headquarters (Dekaranger)
Haven't seen every episode (go sue me), I don't know how elaborate it was but I know the main room had a big conference table, a higher table for Doggy, computers and Swan had her lab and the vehicles had their own place. There was also a cafe in there, where Swan and Doggy spoke to Miyuki Ozu in a flashback in the teamup.

Magic Room (Magiranger)
At the Ozu house, when you went through the wall at the stairs, you could enter this room of requirement. It had many books and stairs up to glass windows. Their mother went through the windows leading to a mirror room of the same room. There was a fireplace with a mural above of five magicians on horses lead by their mother. Magi Mother's Magi Stick was put on the mantel there. Two big doors lead to other dimensions. Their mirror alerted them of attacks. There was also a rack for their brooms.

SGS (Boukenger)
Museum on the outside, inside there was their secret hideaway. In the main headquarter room, it had exercise equipment, table, seats, artifacts, books and computers. There was also a small nook for repairs and computer stuff. Mr. Voice communicated to them through 3 screens. It had a spot that had all the five colors incorporated. Then in Morio's Lab, he had a easy chair (for med stuff/recovery), his computers, artifacts, books, and shelves for the control drivers. Elevator took them down to the Gougou vehicles.

SCRTC (Gekiranger)
It was a big facility, there was a big training gym that was like a basketball court, showers, restrooms (the one we saw had no toilet) and the main conference room that had a place to train and computers. They had separate rooms for recovery as well.

Gunjiro-01 (Go-Onger)
They used the Gunjiro-01. In the front, there was two seats and chairs and couches. In the back, it was much more silver with Go-Onger symbols and lights. It had a spot for the phones and the engine case. Also a big screen and computers. They didn't show them actually sleeping there but it is assumed they lived there, at least the first 5. It was seen in RPM as Project Go-Onger.

Shiba House (Shinkenger)
They run out in Shiba's House, there was a special room for injuries, the main hall and the main meeting room. We also saw two bathrooms (in one we saw a toilet!) and Takeru's bedroom. Outside they trained in the back yard. In the main room contained the five colors in some way. 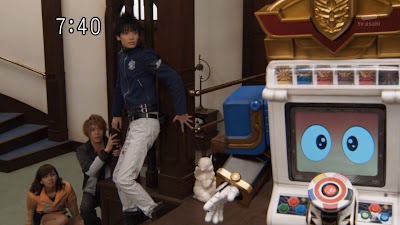 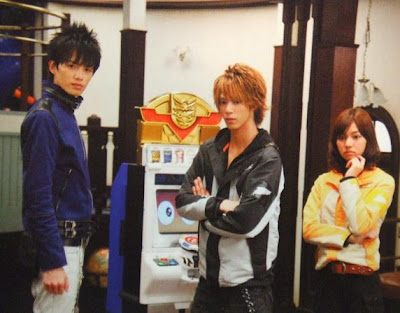 Amachi Astronomical Institute (Goseiger)
They work part-time here and hang out without Mr. Amachi knowing about Datas. There is a lot of wood, stairs, couches, nothing else scientific other than Datas. 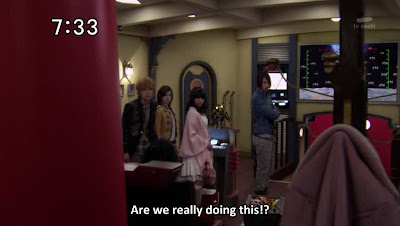 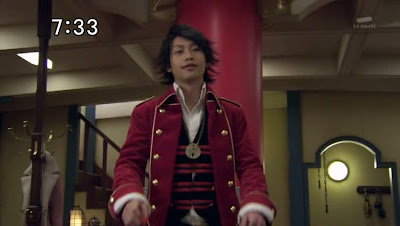 GokaiGalleon (Gokaiger)
So far what we see inside the GokaiGalleon, the pirate ship that travels through space is a giant screen to see outside, variety of stairs, a dining table and a big chair.

Related: http://henshingrid.blogspot.com/2010/08/headquarters-through-years.html
Posted by Lavender Ranger at 12:52 AM 2 comments: