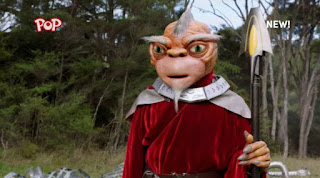 The Rangers are separated looking for Ryjack's ship and Zoe stumbles upon it. Everyone heads for her location. An intruder is heading for it and Zoe is asked to stop and wait. She doesn't and tries entering the ship. The ship self destructs and flings her down. Scrozzle tells the other villains and Evox sends Roxy and Blaze. Scrozzle gives them the device to bring villains back from weapons. Zoe is knocked out. Roxy and Blaze finds Snide's sword and reanimize him, telling him they are his new best friends. They see Zoe and sneak away. Zoe wakes up and spots Keeper, thinking he is an intruder. She finds a Compliance Collar and swings it on Keeper. The other Rangers arrive and Ravi and Nate recognize him as Keeper. The Rangers pick up villain weapons. They put Keeper in a truck, the Vivix steal it, and drive away. 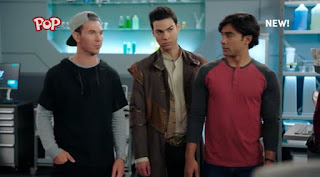 The main three morph. Red heys pm Cruise and races towards the truck. A portal opens and the Dino Charge Rangers (Red, Blue, Black, and Gold) appear. They head for the truck when Vivix and Triptoids appear. The two teams fight Vivix, Putties, and Triptoids. Snide opens the truck and gets Keeper to follow them. Ravi and Tyler spot this but it is too late. The baddies teleport away. In the evil base, Blaze says Keeper must have knowledge about them. Keeper talks about the Energems. At the good base, Tyler says Keeper was trying to get the evil weapons so they wouldn't fall in wrong heads. Everyone accuses Zoey and she apologizes. Koda says they should work together. Back at the evil base, Evox takes Keeper's staff and says he needs the Energems. Snide says he can plan a trap with Keeper as bait. Back at Gridforce, Evox tells them they will give Keeper if they give the evil weapon. Commander Shaw agrees, saying she knows too much. Tyler says Keeper is their top priority. 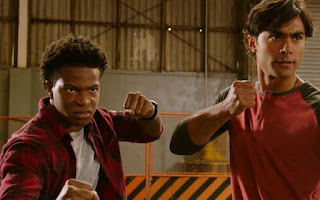 The Rangers got the weapons in a case and go into a warehouse. Snide, Scrozzle, and Keeper walk in. Scrozzle checks the box and sees the weapons. Snide breaks the deal. Scrozzle teleports away with the weapons. The two Ranger teams morph. Shaw tells them of a Gigadrone. The Dino Charge Rangers fight Snide. Tyler calls Shelby and Riley who come from a portal. The Beast Morpher rangers go fight the Gigadrone. The DC rangers fight Snide. Tyler goes Supercharge mode. The Rangers does the Victory charge and final strike. Evox watches and Scorzzle brings back Sledge, who reacts as if there was a bomb. Evox wants Energems, which Sledge agrees. Scrozzle brings back his crew. A Gigadrone drains Morph-X whem the zords arrive.  Wreckerzord and Beast X Megazord are formed. They fight the Gigadrone. They destroy the Gigadrone. 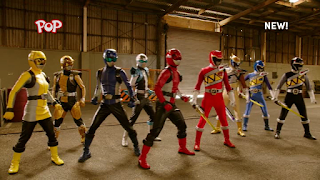 Sledge returns and Koda says they destroyed him twice. The crew (Fury, Poisandra, Curio and Wrench) fight them. They take down the Rangers. Before the crew can steal the Energems, the BM Rangers arrive and fire at Sledge. They rescue Keeper and retreat. Sledge and Snide argue over whose fault this is before they all teleport back to the Crystal Dimension. At Grid Battleforce, Nate and Zoey remove the compliance collar off of Keeper, who has no memory of what happened when he was Evox’s prisoner. Despite that, Zoey promises that the Beast Morphers Rangers can handle this new threat. The Dino Charge Rangers and Keeper say their goodbyes as they leave to their own dimensions, with Keeper forgiving Zoey for putting the compliance collar onto him. After their new friends leave, Commander Shaw reminds them that Evox might have obtained valuable intel from Keeper, and with Ryjack’s relics in his hands, the Rangers must be on their guard. 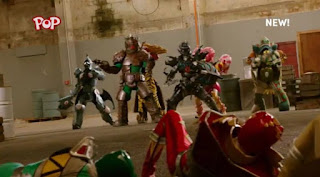 I don't like how this looks for the Beast Morpher Rangers. First, the Rangers attack Chaku, not knowing he was a good guy and now Zoey throws a collar on Keeper. Do they have no eyes for the good guys? Keeper is clearly not a creeper, big or formidable. And which villain would be in solid silver? Well, some monsters come to mind. Never mind. Anyways, it was good to see four of the Dino Charge Rangers. Fans have their theories on why Riley and Shelby did not return. But at least we got some of them. I know those four (Brennan, Yoshi, James and Davi) are always game to return. Funny enough, they said they were there for a convention and tried to throw us off the scent. Why everything has to be a secret? Fans will always find out.  Word from Brennan Mejia is that Michael Taber and Camila Hyde did reprise their voices but were uncredited.

Posted by Lavender Ranger at 9:05 AM No comments: