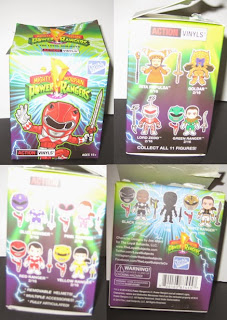 Loyal Subjects have released vinyl figures that usually go for retail price 11 to 15 dollars. They are blind packs, so you don't kow what you will get. The ones available are Billy/Blue, Red/Jason, Yellow/Trini, Pink/Kimberly, Black/Zack, White/Tommy, Green/Tommy, Translucent Red, Rita, Zedd and Goldar. Saban Brands gave me one and it's Kimberly. 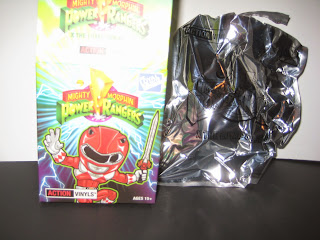 First of all, it's hard to open without ripping the carboard on the top. When you take it out, it is in a silver reflective bag with the MMPR logo in front and  Power Morpher with black spot in back. 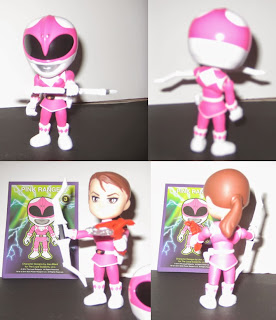 The figure comes with Blade Blaster, Power Bow, Pony Tail and two halves of helmet and Trading Card. Trading card has the figure on one side and the Red Ranger from the box cover in other. Pink Ranger has diamonds on the back which is not accurate, it should be two triangles meeting. Everything else is accurate. She has joints and can move around her legs and arms and head. Yes she can stand up but there is not much stand movement. The ponytail is hard to attach. 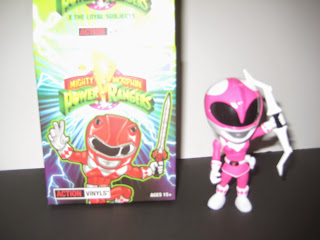 Review:
I love this Pink Ranger! When I first saw these figures, I thought they were smaller and didn't move a lot. I am impressed by the articulation and semi-action of detail, I must say. I would have said attention to detail but the back diamond writhes me because it is a common mistake that in 20 years, you'd think it wouldn't be overlooked. This is suggested age of 15 years old, I also suggest this is not for kids. They are great for collectors. They are a little pricey for me but I understand the price. Also since they are blind packs, I am not risking it in instead of paying $120-150, I will probably be paying $200 or more.
﻿
Posted by Lavender Ranger at 8:27 PM No comments:

ImagiNext is a toy line from Fisher Price company which usually carters to children under the age of 8. ImagiNext are action toys mostly for boys ages 3 to 8. I received these two products (Blue Ranger & Triceratops Zord and Green Ranger & Pink Ranger set) from Saban Brands because I am part of Power Force. 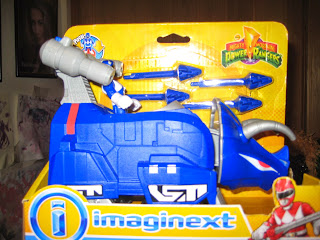 Blue Ranger & Triceratops Zord
When I first heard of this, I was excited for my grandnephew (age 5) and grandniece (age 2) because they are around the age range. Some fans would prefer Dino Charge and not Mighty Morphin, but I think that if this is popular, then there will be more. Obviously this is to capture former fans, now adults to buy this for their kids. 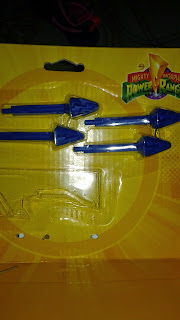 It comes with four missiles, the zord and Blue Ranger figure. There is an empty slot in the package, which has no weapon in it. I thought something was missing. 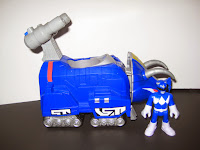 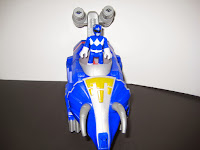 The back missile launcher folds back and stands up. The two launchers rotate back and forth in about 340 or 330 degrees, it doesn't go all the way 360 because it hits the blue part. When the figure is placed in the red center, it pushes down and the zord necks pushes the head out. There is four blue wheels under the fake wheels. 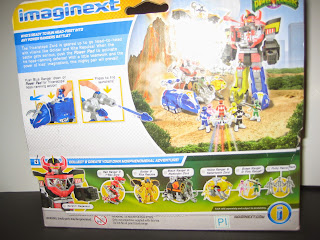 This is the back of the box, it has beautiful artwork of the four zords (no Pterdactyl), Megazord, Goldar & Rita and the six Rangers with Power Cannon. Underneath shows Megazord, Tyrannosaurus, Sabertooth Tiger, Mastodon, Goldar, Green & Pink Set and Putty Set. 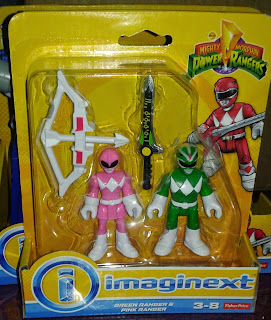 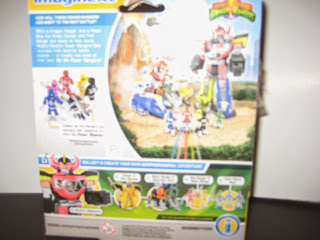 This is the back of the box, it has beautiful artwork of the four zords (no Pterdactyl), Megazord, Goldar & Rita and the six Rangers with Power Cannon. Underneath shows Megazord, Mastodon, Goldar, Red & Yellow Set and Putty Set.
﻿ 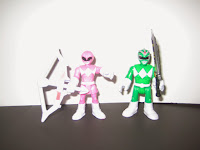 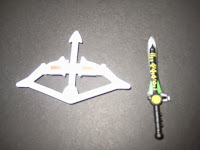 It is hard to put the Power Bow in Pink Ranger's hand. It has slots for the Power Lance, Power Daggers, Power Sword and Power Axe to form the Power Cannon. Proportion-wise I think the Dragon Dagger is too long, I tried fitting it in the Power Bow and it is hard to do so but it fits. 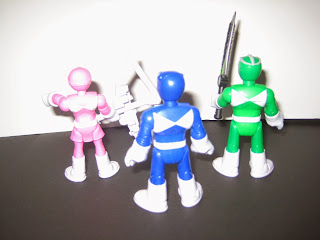 The backs are accurate with diamonds. Pink Ranger has no white in helmet. Green Ranger has silver stripe. The bottom feet have holes to fit the groves in the zords and other playsets. 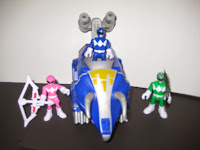 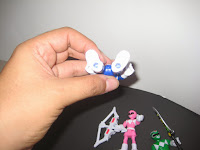 Review:
My grandnephew of course loved the Triceratops Zord. He played with it for hours. His only complaint was that the Blue Ranger didn't have his Power Lance. He rather have the Ranger figures sit in the zords than stand. I like the details like the Triceratops and Ranger symbols on the console like on the show. The zord and Blue Ranger are accurate. Pink & Green aren't. Overall these are great for little kids who are the target audience. If you are a collector, you might find them cute.
﻿
Posted by Lavender Ranger at 8:03 PM No comments: