UPDATED 6/25/14 9:11AM
This week I was sick, well I've been sick for the past two months. End of may I had stomach cramps, then beginning of June had food poisoning, that passed and this week I had ear ache and sore throat. I am only mentioning this to explain why I am behind one this news and stuff. 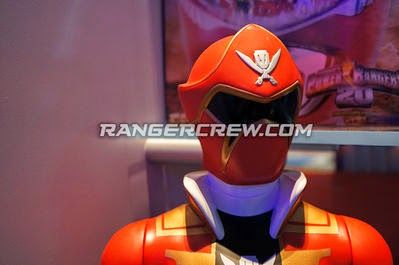 Source: http://blog.samuraicast.com/power-rangers-dino-charge-licensing-expo-2014/
This week was the Licensing Expo, when we usually find out the new theme and logo of Power Rangers but since we already knew it was Dino Charge, the bigger news from Fury Diamond who has attended it for the past three years is that there will be more Super Megaforce merchandise (like 31" Red and Blue Super Megaforce Rangers, lunchbags, etc.) and that there are planning more than one MMPR reboot movie (the first will be an 'origins,' if that is a hit, of course there will be more movies, presumably the Green Ranger may not appear in the first movie---maybe as a Joker cameo?). Oh, at the Saban Brands booth, they had Megabloks, Bandai toys, the giant figures, board games and Scholastics books. 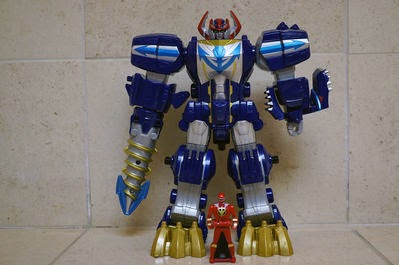 source: http://blog.samuraicast.com/deluxe-q-rex-megazord-review/
Here is FuryDiamond's review on the Licensing Expo including Koichi Sokomoto's Gunblade and the Q-Rex Megazord he found at a Wal-Mart in Las Vegas. The Q-Rex Megazord comes with a Red Ranger key... which is Dino Thunder Red. Which has people scratching their heads. My theory is that it could be that Bandai wants all the Red Rangers to have Zord Builder Keys. Zord Builder Keys refers to the Red Ranger keys that come with Morphers, Megazords, Cycles, Zords, and Roleplay Gear like the Hand Gear and Sword. They are usually a darker red and has different design or variant. Q-Rex's appearance in stores is just the beginning of the Fall Wave toys rolling in. They usually do in the summer until November, when the Dino Charge toys should start coming by Black Friday. Depends on where you live of course, where I live in Miami we get things 2 or 3 weeks after the initial sightings and sometimes we get nothing (Armored Mighty Morphin Green Ranger figure). I already spotted the Armored Super Megaforce Silver Ranger at a local Toys R Us.
Link: http://blog.samuraicast.com/licensing-expo-2014-summary/

Also some of the Dino Charge toys appeared in a promo and FuryDiamond provided a cap and there is the main megazord and instead of pink, the Triceratops appears to be purple which has made fans quiver. But we'll see when it comes to stores, prototypes do change.

http://razzle1337.tumblr.com/post/88992931386/dino-charged-toy-info-from-toys-r-us
Also Razzle of Razzle's Dazzles has discovered on his UPC search that there might be a special Legendary Morpher with 20 Ranger Keys and it will be $79.99 at Toys R Us. But who knows if this will be released or not. He had found a UPC thing of Blind Packs months back and that never came out. As for what 20 keys it could be, my theory is that they are the Red Rangers.

Razzle has also discovered a Legacy White Tigerzord, Legacy Saba Dagger and Legacy 'Mov' 5" figures which we can only guess are figures based on the 1995 movie costumes. Or maybe they will just look like the 1995 figures. Razzle says 5 are Rangers and one is Ivan Ooze. Hopefully we'll find out more at Comic Con. These are most likely to be released in 2015 along with Dino Charge toyline. No pictures yet, these are just toy listings from Toys R Us found through the UPC code scanner.
Posted by Lavender Ranger at 10:41 PM 1 comment: